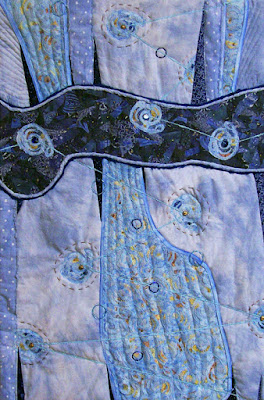 Cosmic Connectivity, 22" x 33", made by Pam Geisel
This piece is currently hanging over my sewing table so I'm actually looking at it right now while I'm writing about it.
This art quilt is a unusual for me because I didn't have a specific plan when I started it, I just knew I wanted it to have contrasts: light vs. dark and small pieces vs. large pieces. It is the only quilt that I've started then set aside. 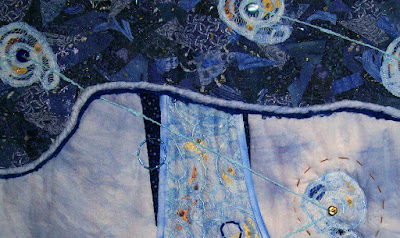 When I came back to it, a few years later, I made decisions as I went. I thought there was too much blue so I added some small yellow and orange pieces under the light blue lace 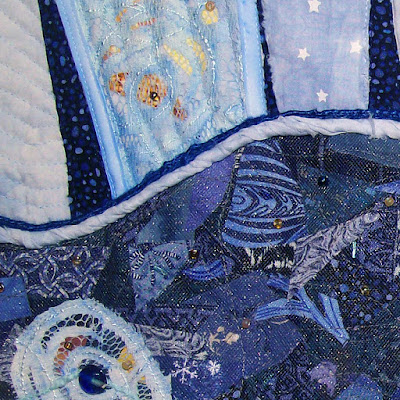 The light blue that's just under the dark blue yarn but above the dark blue fabrics is a piece of thin blue sheer fabric that I twisted to make it more yarn like then I sewed it down. 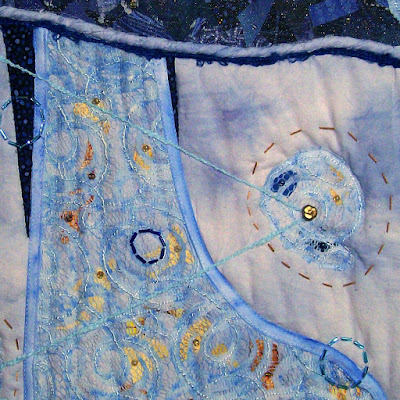 Then I decided to add some beads so I got out the yellow, gold, and blue beads and played around with where to add them. I also did some hand stitching with gold and brown embroidery floss to accent the smaller lace pieces. 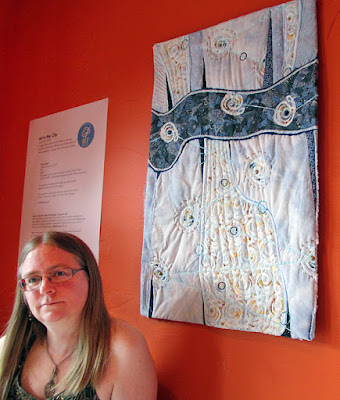 This is probably my favorite photo of me with one of my quilts, although I'm not really sure why. This was taken at the Wheat Penny Oven & Bar in downtown Dayton, Ohio, for Art in the City in 2016. In addition to Art in the City, it was also in Sacred Threads in Herndon, VA, in 2019 and the ​Best of 2013, Ohio Designer Craftsmen's traveling exhibit in 2013.

Because this is the Quilt of the Week, it is 10% off the original price of $600 through 1/31/21 if you purchase directly from me. Details can be found here.
Posted by Pam Geisel Art Quilts at 1:03 PM

Email ThisBlogThis!Share to TwitterShare to FacebookShare to Pinterest
Labels: 'Cosmic Connectivity', 2021 Quilt of the Week