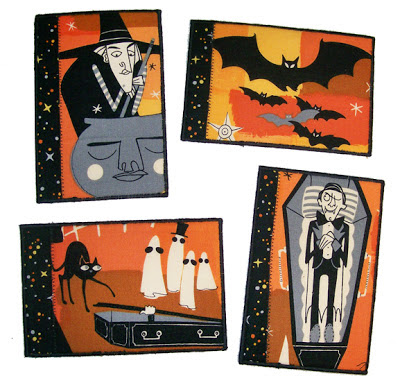 Some quilted postcards from an adorable Halloween fabric I found.
Posted by Pam Geisel - For Quilts Sake at 1:51 PM No comments: Links to this post 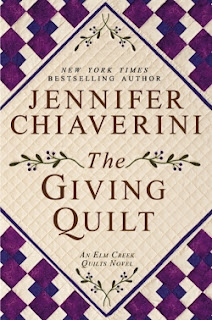 One of the things that I’ve admired about Jennifer Chiaverini’s books are how she can remain true to the Elm Creek Quilts novel series but still have ways to branch out in new directions with new characters. Her latest book The Giving Quilt takes place at Elm Creek Manor with many of our favorite characters present to lead a quilting retreat the week after Thanksgiving.

Instead of workshops covering different quilting techniques, the quilters are all making quilts to donate to Project Linus, a real organization that collects handmade quilts and blankets to distribute to children in need.

The first chapter introduces us to five new characters from different parts of the country who are attending “Quiltsgiving” this year: Pauline, Linnea, Michaela, Jocelyn, and Karen. Then each character gets to tell her story and struggles in her own chapter. The final chapters cover how the characters resolve to deal with these struggles and how the act of quilting and the act of giving help them move forward.

Like all of Jennifer’s books, there are some characters who we’ve seen before. Karen was one of the quilting instructors who applied to teach at Elm Creek in Circle of Quilters. It is also mentioned that Michaela’s mother attended Elm Creek, but I’m not sure if she was a specific character or not.

I recently re-read Jennifer’s historical books (The Sugar Camp Quilt, The Runaway Quilt, The Lost Quilter, and The Union Quilters)  to have a better grasp of how the characters and events relate to each other Because some of those characters names were fresh in my head I noticed a few clues that might develop in future books.

It is mentioned that Linnea’s husband Kevin’s has a distant cousin who mentioned had attended a Nelson family reunion that took place at Elm Creek Manor. Thomas and Dorthea Nelson are characters in the historical books. And Jocelyn, an African-American character, has a family getaway in North Carolina. The description of that place sounds very similar to the place where Johanna, a runaway slave who appears in The Runaway Quilt and whose story is told in The Lost Quilter.

The Giving Quilt is being released today and is available in hardback.
Posted by Pam Geisel - For Quilts Sake at 12:02 PM 2 comments: Links to this post 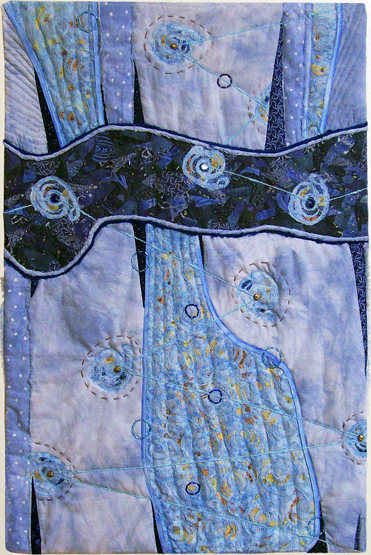 This quilt actually began a few years ago. It started with some hand-dyed light blue fabrics with a central fabric mosaic made of small pieces of dark blue fabrics. After several weeks I decided it wasn't working so I put it away to work on other projects. It sat in the back of the closet and in the back of my mind for a few years.

I usually have a pretty good plan for most of my quilts when I start them, but this one eluded me. I recently pulled it out and worked on it one element at a time, not really by planning but by experimenting every step. I also already had the batting and backing material sandwiched, so all the additions from this point on were accomplished via quilting. There isn't a lot of quilting visible from the front of the quilt but trust me, there's a lot of quilting on this quilt.

It was originally square so I tried visually cropping it and decided to cut it down so it was rectangular rather than square. I originally pieced it with some raw seams on the top and now both the left and right sides had a spot where the raw edge acts like a fringe (and that made the binding step a bit tricky). 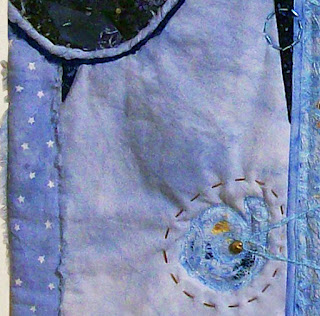 I played around with the hand-painted lace piece until it found a place that I liked. Originally I wanted it to be a mono-chromatic piece, just the blue, but emphasize the contrast with the dark and light shades, but I decided it needed a pop of color. When in doubt, always go for the color that is opposite on the color wheel. I put small pieces of orange and yellow-orange fabric under the light blue lace and I really liked the effect. 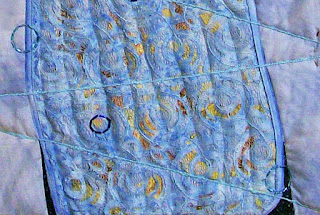 I decided it needed some dark blue in the rest of the quilt so I cut some dark blue "spikes" and appliqued them to the top as raw edge machine applique.

The background still seemed a little dull so I cut up some more of the hand-painted lace and attached 8 of them to the background, with three in the dark blue fabric mosaic part. These also had the orange and yellow fabric beneath them.

I found some light blue yarn the exact same color as the hand-painted lace, but I wasn't sure how to use it. I experimented with many different ideas until I came up with having them connect the lace parts. It literally ties them together. I also decided to couch a dark blue yarn next to the hand-painted light blue sheer fabric that covers the edge where the fabric mosaic sits on the background. 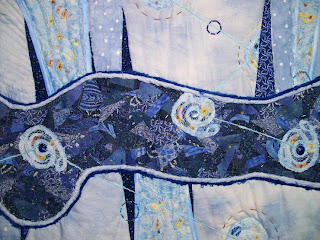 I wanted to do some hand quilting using thick yellow/gold floss. I tried several ideas until I hit upon making circles around the lace parts. A darker floss outside the blue yarn and a lighter color inside the pie-shape left by the blue yarn. (Here's a tip if you end up taking out quilting and want to get rid of the holes left by the needle, spray the area then use and iron to steam the holes closed).

I used my favorite strip-facing binding technique then it was on to embellishing.

I picked out several blue, yellow and gold beads and tried many, many different arrangements and beads. Eventually I decided to echo the circle motif using bugle beads (glass beads that are long and narrow). The lighter blue circles have 10 beads while the darker blue circles are a little smaller and have 8 beads each. I used some washers as a template to get the sizes consistent.

I added some large beads at the center of the lace spirals and many beads in the lace areas. 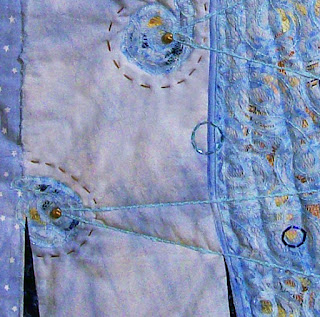 All that was left was to name it. I had recently seen the movie "Beasts of the Southern Wild" and looking at this quilt made me thing of the line from the movie: "When it all goes quiet behind my eyes, I see everything that made me, flying around in invisible pieces." There was something cosmic about this image, although I imagine it's much darker out in space.

I joked that I would call it "Space Snails" because of the spirals but instead decided to use alliteration (always a favorite fallback of mine) and call it "Cosmic Connectivity." Even when the lace spirals have been separated from the larger lace fabric, they are still connected to each other, even when confronted with obstacles such as the dark blue fabric mosaic. 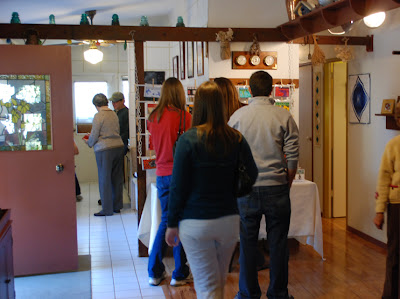 The Yellow Springs Artist Studio Tour is this coming weekend, Sat., Oct. 20 and Sun. Oct. 21, from 10 am-6 pm both days. This is my fifth year participating as a host, and this year I have three guest artists. We have 27 artists at eight locations with seven guest artists who are new this year. 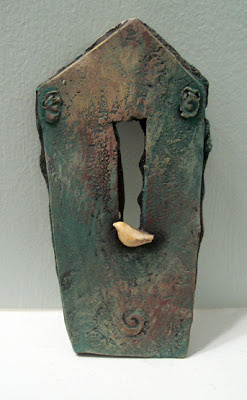 All three of my guests are artists whose work I admire so much that I own art made by all of them. Instead of using the promotional photos that were provided for the brochure, website, and other print material, I'm including photos of the pieces that we have in our house.

Lisa Wolters makes wonderful sculptural clay vessels that incorporate her love of typography and words themselves by pressing messages into slabs vessels that she then decorates with oxides, vibrant underglazes and touches of clear overglaze. 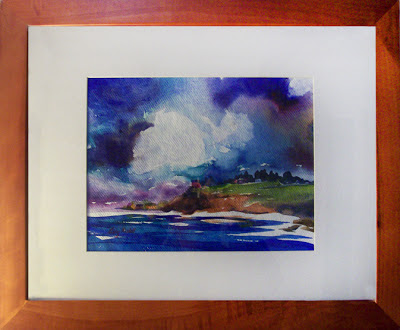 Libby Rudolf paints lovely watercolors inspired by the beauty of natural spaces around the country and she enjoys paint plein-air. I know she has been busy painting new paintings for this weekend. 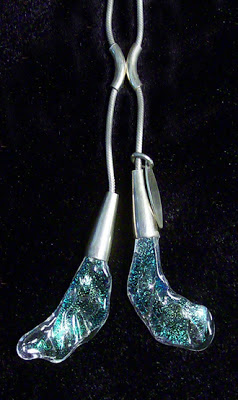 The tour is a driving tour. Visit the Yellow Springs Artist Studio Tour website for more information about the other hosts and guest artists and to download a tour map. Maps can also be picked up at the Winds Cafe, Young's Dairy, the Yellow Springs Chamber of Commerce, and at the artists studios the days of the tour. All studios will have red balloons and signs.
Posted by Pam Geisel - For Quilts Sake at 9:11 AM No comments: Links to this post 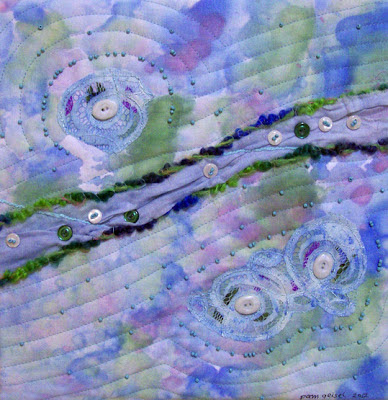 The background fabric for this quilt was fabric that I hand-painted a few years ago but wasn't sure what to do with it. The three pieces of hand-painted lace were leftover from another project and were quilted to the background fabric along with a piece of hand-dyed sheer fabric that was twisted and runs across the middle of the piece. Two different yarns were twisted together then couched next to the sheer fabric.

The quilting lines that echo the "stream" and the lace swirls. Embellishments include antique buttons and tiny blue beads that were attached by hand. 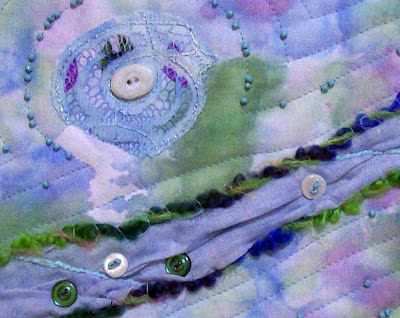 The quilt is mounted on at 12”x12” wooden frame similar to how canvas is wrapped over a wooden frame. It was made for the “Dare 2B Square” art show at Village Artisans which runs through the end of October.  All pieces in the show are 12”x12” and priced at $100, although "Cosmic Stream" has already been sold.

Posted by Pam Geisel - For Quilts Sake at 5:31 PM No comments: Links to this post

For Quilts Sake on Etsy