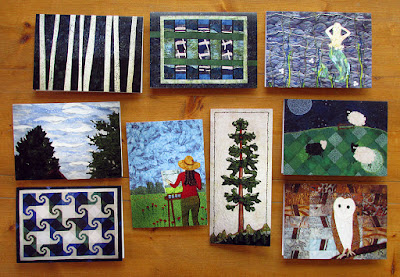 I had some new professionally-printed note cards made of some of my quilts.

They are available as singles ($5) and in sets ($25) at in Yellow Springs at Village Artisans, where ever I'm doing a show, and on my Etsy page.
Posted by Pam Geisel - For Quilts Sake at 6:03 PM No comments: 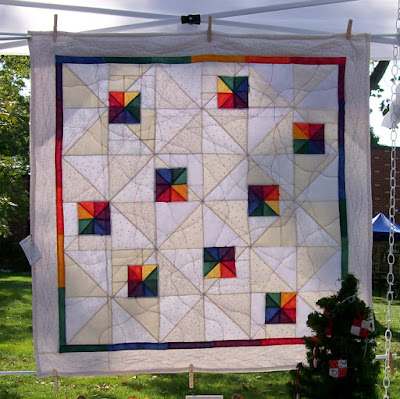 It was ten years ago in May when I officially started For Quilts Sake and registered to collect and pay sales tax. I had no idea where it was going to go when I started. I've made over 500 quilts (you can read about that milestone in this blog post from last year), sold quilts all across the country (and a few to other countries), sent quilts to be exhibited across the country (Sisters, Oregon was the farthest in 2010), won awards, led workshops, held trunk shows, and been featured in magazines.

The quilt above, "Rainbow Pinwheel," was made shortly before I officially started and I consider it one of my first true art quilts; the 35 that came before it were based much more on traditional designs. Since I started the blog in 2009, I haven't had a chance to share this quilt with you.

"Rainbow Pinwheel" features nine large cream-colored pinwheel blocks and each pinwheel block had a smaller, rainbow-colored block inside it (pieced, not appliqued, which is probably how I'd do it if I were making this quilt now). 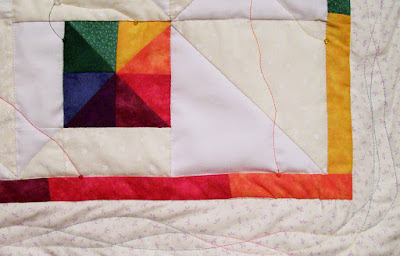 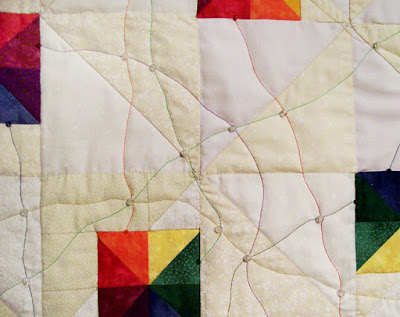 At both ends of that quilting line is a glass bead of the same color. And everywhere the quilting lines met, I added a clear bead, like a prism splitting the white light into color.

One of the things that I love about the photo at the top of the post is that it was taken with the sun behind the quilt, giving it a stained glass feel. This quilt is in a private collection.

Posted by Pam Geisel - For Quilts Sake at 9:48 AM No comments:

"Journey" on exhibit with "Best of 2017" Traveling Show

My art quilt "Journey" is in the Ohio Designer Craftsman's "Best of 2017" show. The traveling exhibit will be at the following locations: