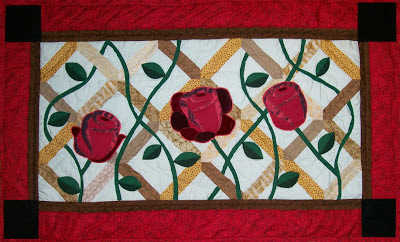 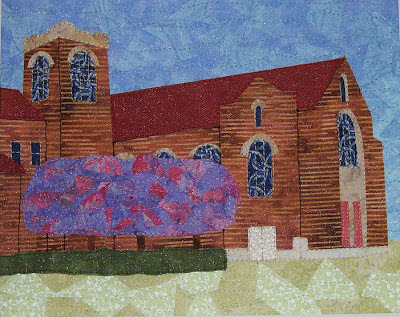 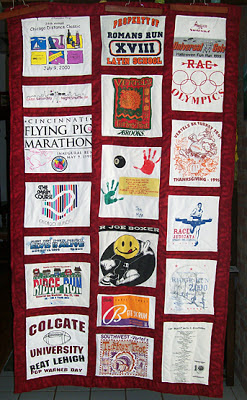 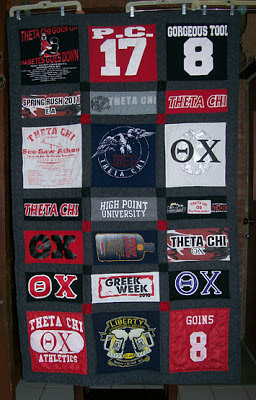 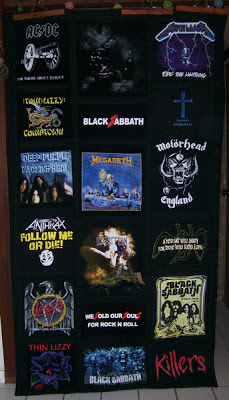 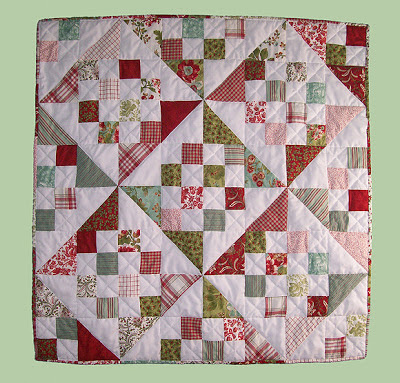 Wishing you a holiday season that is warm and bright!
Posted by Pam Geisel - For Quilts Sake at 10:36 AM No comments:

The new season of Project Quilting starts up again in January. To help get us ready for it, Kim of Persimon Dreams posted an off-season challenge:

Quick recap of the challenge: "Happy Holidays" 1. Select a  December or January holiday. 2. Use two different methods of quilting.

I still love the felt ornaments that we made but I thought the burlap background was a little saggy and now that I was a quilter, I really wanted to make it into a quilted piece. 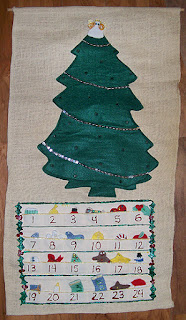 First I removed the felt tree from burlap background because I didn’t want to hand sew the snaps on again.

Then I removed the silver sequin "tinsel" on the tree. I'd forgotten that the tree was made of two pieces of felt, split along the tinsel line.

Next I pinned the tree to the new background then couched some funky thread on the tree. I picked the thread because I liked the variegated colors and I thought the loops resembled Christmas lights.

I couched the thread before appliqueing the tree to the background so I could tuck the loose ends of the thread under the tree. Because the tree was made of felt and it won’t fray, I didn’t have to turn the edges under. Detail of ornaments in the pockets

For the pockets I cut 4 strips 12.5” x 3”. I folded the strips lengthwise so they were 12.5” x 1.5”. I sewed them to a piece of 10.5” x 12.5” plain backing fabric then flipped them up so the folded line was the top of the pocket and the seam allowance was now inside the pocket. I folded the edges under and appliquéd the plain background to the new background.

Because this challenge had to include a second method of quilting, I pieced some green fabric with small black stars to the top and bottom of the background. 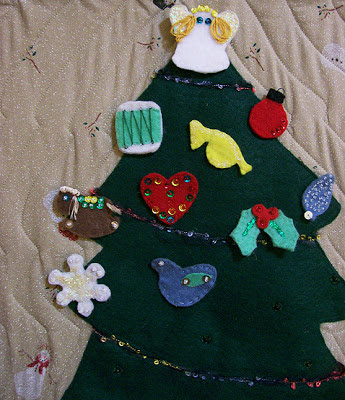 Detail of ornaments on the tree

I finished with the same green fabric for the binding then moved the felt ornaments into their new pockets.

To see the other entries go to the Happy Holidays page. 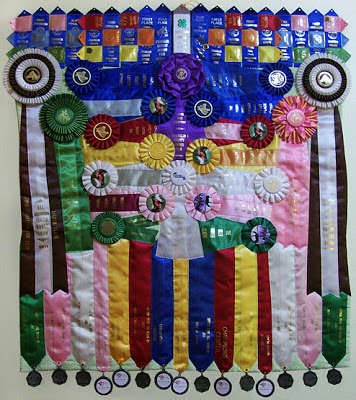 This quilt is made using ribbons that Hannah won at horse show competitions. She gave me over 150 ribbons but luckily I didn't have to use them all.

The most difficult part was dealing with the bulk. It was tricky arranging the ribbons temporarily to take photos to send to the client so she could approve the layout ideas.

Usually quilt tops are made by placing two pieces of fabric with the good sides together then sewing them together 1/4" from the edge. When you open them, the stitching can't be seen because the fabric folds to form a seam in the back. I didn't think the ribbons would work well being sewn together that way and folded back so once the final design was decided on, I layered the light green background fabric with some batting and the backing fabric then started attaching the ribbons to the top, so the stitching that holds down the ribbons is also the quilting.

Detail of the woven flat ribbons.

I started at the top. I wove the flat ribbons into groups that were 4 ribbons wide and 3 ribbons deep. I held them together temporarily with blue removable tape while I was sewing them down. 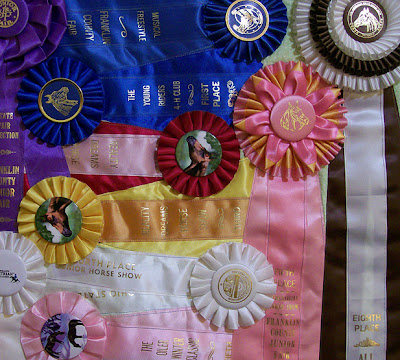 Detail of the ribbons with rosettes.

Next I added the ribbons with rosettes. I started with the purple one in the top center then working on either side of that ribbon, I added the ribbons in descending order, sometimes leaving parts unsewn because the next ribbon needed to be tucked under it. I changed to my regular sewing foot instead of the walking foot normally used for quilting because the regular foot was smaller and allowed me to get closer to the rosettes.

Once the center ribbons and the horizontal ribbons were in place I switched to my freemotion "hopping" foot which allowed me to zig in and out of the rosettes to make sure they were attached to the quilt. 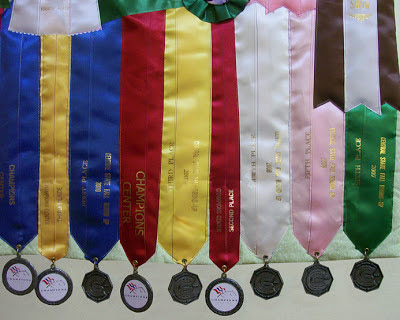 Detail of the ribbons with medals.

I tried to do as much as the rosettes before I did the ribbons with the medals because I knew once I started those, the quilt would become more difficult to maneuver. Luckily these ribbons were attached going straight down. 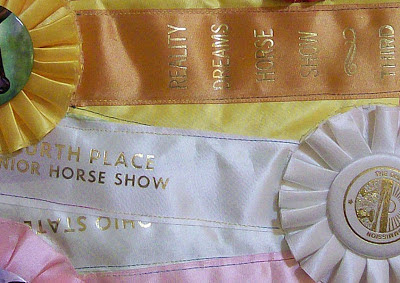 Detail of the variegated thread.

Because of all the bright colored ribbons, I didn't want to have to change the thread color for every ribbon so I decided to use a variegated thread in rainbow colors which went from red to yellow to green to blue. Some of the rosettes were sewn with the variegated thread, while others were sewn down with a neutral thread, somewhat visible in the photo above around the white rosette.

Because of the weight of this quilt, which is 3.5 pounds, the hanging stick has two picture hangers attached to it, one one the left and one on the right side of the stick.

All photos can be viewed at a larger size by clicking on them.

There are several local galleries that have my art for sale for the holiday season. 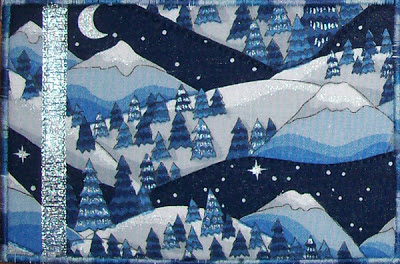 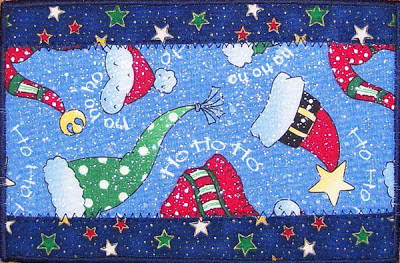 The Fairborn Art Association Gallery is located at 221 North Central Ave., Fairborn, Ohio (located in the back of the Fairborn Senior Apartments). 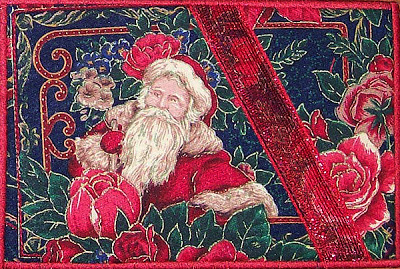 DVAC's ARTtoBUY
Dayton Visual Arts Center is having their annual "ARTtoBUY" Holiday Gift Gallery. It is open through Dec. 29. The gallery is open Tues. through Sat. from 11 am to 6 pm with the exception of Christmas Day. There will be Artist Demonstrations for First Friday on Friday, Dec. 6 from 5 to 8 p.m. 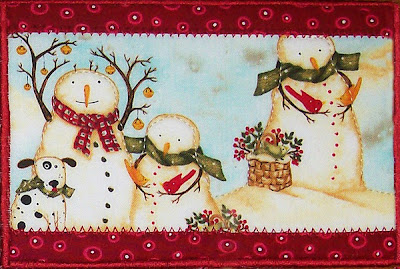 The Fine Art Center is located inside Town & Country, 300 E. Stroop Rd. in Kettering, Ohio.
Posted by Pam Geisel - For Quilts Sake at 10:30 AM No comments: