I didn't plan on completing an average of one quilt per week, it just turned out that way. Some were bed sized, some were small; some were traditional quilts, but most were art quilts. (If you click on the links you will be taken to the original blog posts about each quilt.)

This year started out like the last few years, with the Project Quilting challenges: 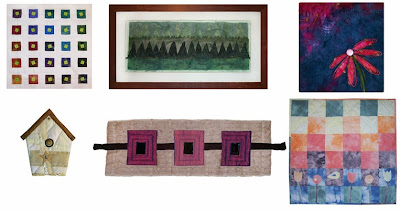 And there were several custom quilts: 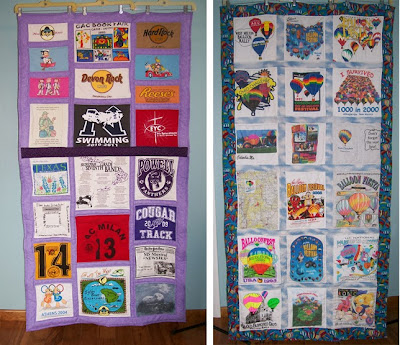 Then there were some quilts that were made for other groups: 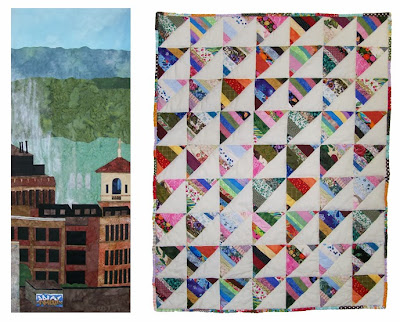 (Left) My slice of "Industrial Dayton" for the Miami Valley Art Quilt Network’s Dayton Landmark Redux quilts and (right) a collaborative "String Quilt" for the Children's Museum of South Dakota. 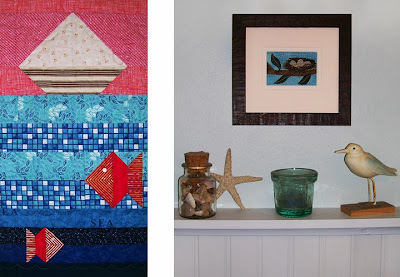 (left) "Red Sky at Night" which was a special Project Quilting challenge and (right) "Home Tweet Home", a fabric mosaic made for the Miniature Show at Would You, Could You In a Frame

And a series of quilts based on design principles for the Miami Valley Art Quilt Network study group: 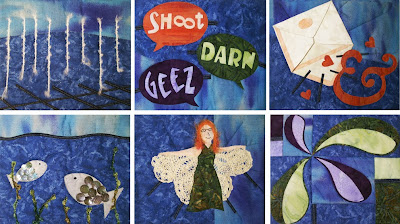 The next few months was getting ready for the Textile Art Group show at the Wind’s Café in Yellow Springs: 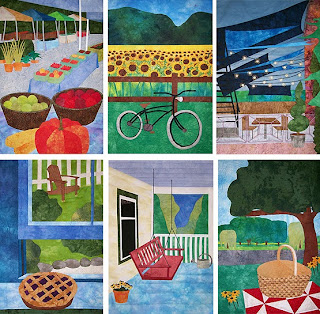 Two more custom quilts made using the client’s father’s bathrobes and made for twin sisters: 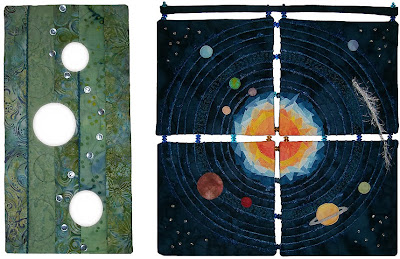 And something a little different: 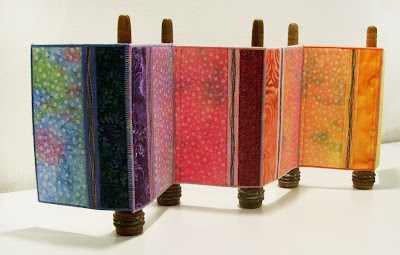 "How Does Your Rainbow Grow"

This little 3D art quilt and "Sunrise in the City" were the only piece I made all year that wasn't for a specific challenge, show, or client.

Did you count them? Yes, there are only 48 photos as three not mentioned here because they aren't ready to be shown, plus a custom table caddy that I didn't take a photo of before it was picked up.

Sunrise in the City 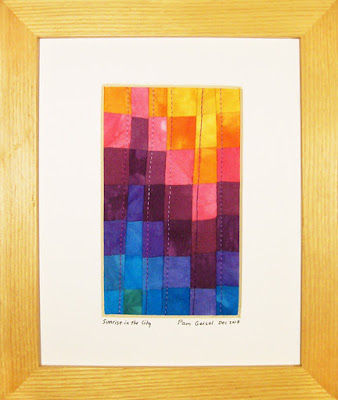 I have been making quilted bookmarks using hand dyed fabric. I usually piece the strips of colors together then cut them to the size I need, which sometimes leaves me with left over smaller pieces. I used these pieces to make this framed art. 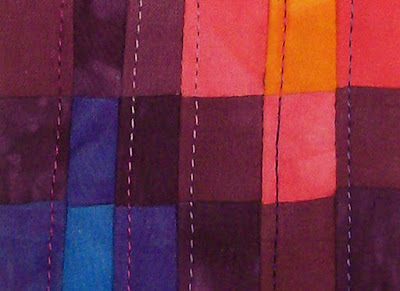 I used a purple variegated thread to quilt these then I framed it.

More about Sunrise in the City.

Posted by Pam Geisel Art Quilts at 3:01 PM No comments:

Email ThisBlogThis!Share to TwitterShare to FacebookShare to Pinterest
Labels: 'Sunrise in the City', Framed Art

The last few years the members of the Miami Valley Art Quilt Network created “slice” quilts of photos of Dayton Landmarks. For 2014 we are each making a quilt that represents a place in one of the Five RiversMetroParks in Dayton, Oh.

The quilts could be based on a photograph of a spot in one of the parks, the use of the location, or something regarding the history of the Metro Parks. The quilts can be more abstract than the previous sets but must convey the scene without needing a “story” to explain it.

I decided to use an image from the Eastwood MetroPark, which is located close to where I grew up. I didn’t go there a lot as a kid, but I did have a vague memory of some stone bridges. My husband remembers going with his family when he was a kid and canoeing in the lagoon and under the bridges. Last Spring we went to the park to take some photos that I could use for reference. 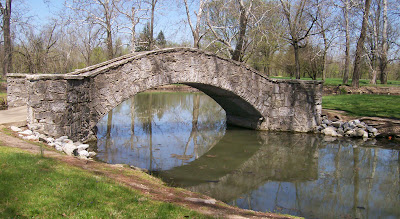 I made this quilt similar to my quilt “Early Morning Nine Patch” only the sky in this quilt is at sunset so there are purples and pinks in it, but there is still a strip that has stars on it. The strips are 1" tall.

There are two “four patch” squares in the sky and one in the ground, plus the colors of the stones on the bridge alternate in a four-patch fashion, especially noticeable in the posts. I really think the bridge's reflection in the water really adds to the piece.

The sky and ground are pieced, the bridge is raw-edge appliqué. I bound it using my favorite facing technique.

The Miami Valley Art Quilt Study Group was recently discussing the “Rule of Thirds” so I used this to determine the placement of the bridge. To use the “Rule of Thirds” you divide the quilt into thirds both horizontally and vertically then make a note where these lines cross. This is where you place an item of interest, in this case it's the bridge.