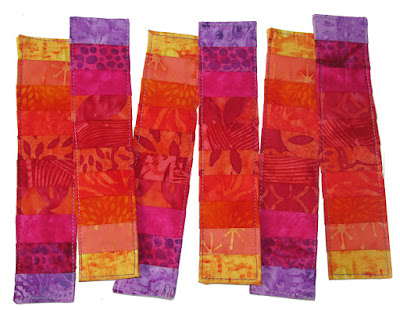 I have new bookmarks available in my Etsy shop.
Posted by Pam Geisel Art Quilts at 1:00 PM No comments:

Email ThisBlogThis!Share to TwitterShare to FacebookShare to Pinterest
Labels: bookmarks

Nine Ball - Quilt of the Week 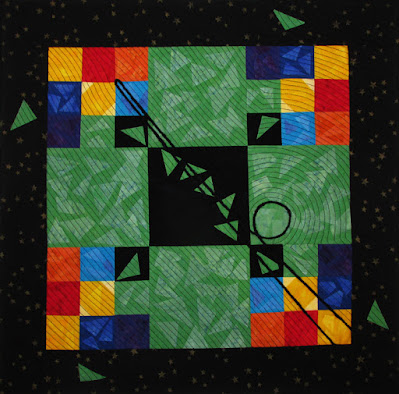 Nine Ball, 20" x 20", handmade by Pam Geisel
The traditional block for the sixth Focus Through the Prism quilt was the Nine Patch block. Both Positively Pinwheels, and to an extent Chasing Geese were already arranged in a Nine Patch fashion so technically this is a double nine patch. The four outside blocks are also little nine patches.
One thing about working in a series is the farther along you go, the fewer decisions you have to make because you've already made most of them. By this point I only had two colors left so I only had to decide what colors to put where within the Nine Patch blocks, what to do with the yarn shape, and what to name it.

The "What to name it" question was key for the theme of this quilt. I thought about phrases with the word "Nine" in them and when I thought of the pool game "Nine Ball" I realized that my focal color was green, the same color as the cloth on a pool table.
I did some research to find out what colors the balls are for the game Nine Ball and decided that would be the colors I'd use in my Nine Patches. I did have to make one small change, the 7 ball is usually burgundy and not only did I not want to introduce a new color at this point, I wanted to use all of the colors from the Focus Through the Prism set so I used my artistic license and changed it to the only color not represented, the blue color (I used the indigo for the blue ball). You might notice that the striped 9 ball (in the center of the Nine Patches), is made with two colors. 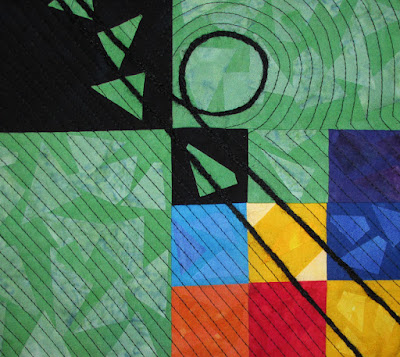 All of the seven quilts in the Focus Through the Prism series:
- Use all of the seven colors but have one main color (with smaller pieces of fabric almost the same color to give it some visual texture)

- Have a black border with brown stars

- Have bits of the focus color on the black square in the middle, on the border, and on top of the other colors

- Have a piece of black yarn couched on top

In this piece the focus color is GREEN and the yarn represents A POOL CUE AND BALL.

My series was featured in Art Quilting Studio Magazine's Autumn 2018 issue on working in a series and they were also included with several quilts that other people made for the Focus Through the Prism challenge including the Wisconsin Quilt Expo in 2016. Above is Nine Ball with some of the other green quilts.
Because this is the Quilt of the Week, it is 10% off the original price of $300 and as a special deal, all of the Focus Through the Prism quilts are 10% off through 5/16/21 if you purchase directly from me. Details can be found here.
Posted by Pam Geisel Art Quilts at 1:01 PM No comments: