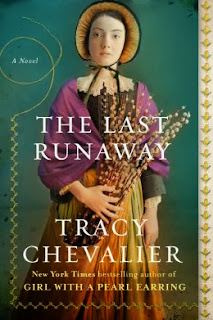 I was flipping through an issue of Ohio Magazine when I saw an interview of the author of this book. Since there was a large photo of the book cover, that was what I noticed first. You know how sometimes your mind skims things and tries to fill in the pieces, often misinterpreting them? Since there was an image of a woman in period clothes, since the word “Runaway” was in the title, and since the author’s last name was long and had “C H V plus some Es and an A” I assumed it was about Jennifer Chiaverini, whose books I have reviewed on this blog.

I realized my mistake right away, read the article, and learned that the book was set in Ohio (where I’ve lived all my life!), was about a quilter (I like to quilt!), and was set in the 1850s and dealt with slavery and the Underground Railroad (OK, not a personal connection but I have recently enjoyed reading books set during the Civil War). I hadn’t read any other books by Tracy Chevalier but I sought this one out and I’m very glad I did as I really enjoyed it.

The story is about Honor Bright, a young Quaker woman who has just emigrated to Ohio from England. Aside from having to get used to living in a new country with people she’s never met, she also questions the local Quaker’s views on slavery and their actions and reactions to it.

Since Tracy attended a Quaker camp as a child, she was familiar with their practices. She also attended Oberlin College in Ohio, so she had a personal history with the area. Both of these connections made the story feel more authentic. Another aspect that I enjoyed about this book is how the story is told as a third-person narrative but every chapter is sandwiched with a with a first person letter, usually written from Honor’s point-of-view.

Honor not only notices how different the Ohio flora and fauna is from her native country, but also the quilting styles. She is used to doing English Paper Piecing and patchwork, while the Quakers in Ohio seem to do a lot of red and green appliqué quilts. Honor thinks that the appliqué work is simpler and easier than what she’s used to doing although I personally haven’t made an entire quilt using traditional appliqué as I think it’s pretty difficult.

It was interesting to find on Tracy’s website under the section about “The Last Runaway” that there are links to Pintrest boards that Tracy has set up with photos of examples of English, American, Red and White, and African American quilts.
Posted by Pam Geisel - For Quilts Sake at 9:17 AM No comments: 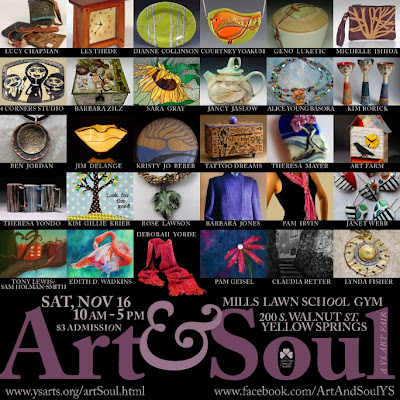 Art & Soul, features 30 exceptional artists who “put their souls into making art.” The show is this Sat., Nov. 16 from 10 am-5 pm. It will be in the Mills Lawn School Gym, 200 S. Walnut St. in Yellow Springs, just one block from the Xenia Ave. There's plenty of free parking in town and also in the lot behind the school.

You can find photos and bios of all the artists participating on the Art & Soul Facebook page (and you don't have to have a Facebook account to view the page...if it asks you to sign up just close that window).
Posted by Pam Geisel - For Quilts Sake at 9:21 AM No comments:

My Very Educated Mother Just Said Uh-Oh, No Pluto: an art quilt which focuses on the design principle of Unity 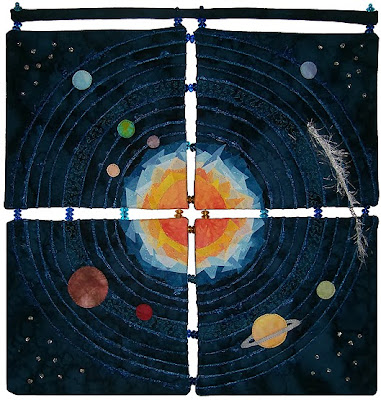 This quilt came about because my art quilt group, the Miami Valley Art Quilt Network, is working through the book "Adventures in Design" by Joen Wolfrom. We were working on the design principles of Unity. We were focusing on Unity through Repetition, Rhythm, and Harmony; Unity with Variation and Contrast; Bridging Extremes through Gradation; Unity through Proximity; and Unity through Movement.

My idea was to have a 4-part piece with each part detailing one of the five focuses although the focuses can also be found in the piece as a whole.

Unity through Repetition, Rhythm, and Harmony :
Repetition is repeating one or more element. Repetition that flows fluidly allows rhythm to come forth. When repetition and rhythm work together, harmony is created. 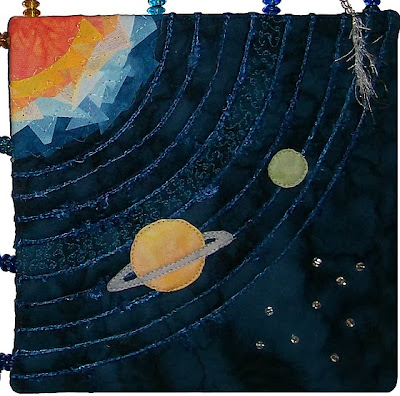 Unity with Variation and Contrast :
Variation is created by shifting the motif shapes and contrast by altering the value, color, or size. 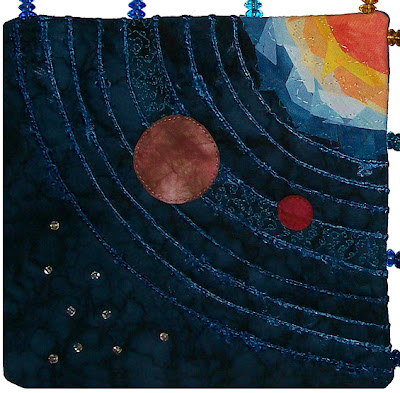 Mars is small and a dark red while in contrast, Jupiter is larger and a lighter red. The tight micro-stippling quilting in between Mars and Jupiter, representing the asteroid belt, contrasts with the space between the other orbits where there isn't any quilting (other than the couching holding down the yarn).

Bridging Extremes through Gradation :
Bridging is gently moving from one extreme to another, most often with color, value, and shape. 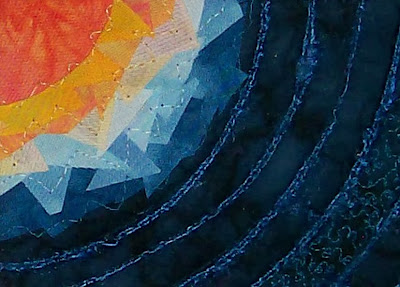 Yes, there are four parts to the quilt and five design focuses. I thought the most obvious place to use bridging was on the sun and the sun is on all four parts equally. Instead of having the orange sun directly on the navy blue background, I "bridged" it by going from orange to yellow to white to light blue to blue to navy blue.

This part was the most fun to make and I did it in a style similar to how I made my fabric mosaics. I worked on the piece as a whole and cut it into four parts later. First I drew center lines and my inner and outer circles. I fused the blue and light blue pieces first, then added the white and yellow pieces. The orange sun had folded edges and was fused to the top.

Unity through Proximity :
Proximity is arranging the visual elements close enough to have a visual bond. 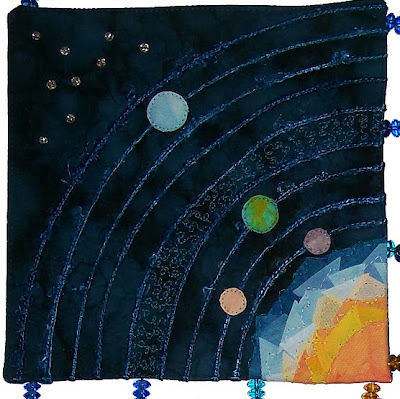 In this section Mercury, Venus, and Earth and close together, giving them a visual relationship. Neptune is farther out, making it more it's own design element. The proximity of the stars also bind them together.

Unity through Movement :
Movement is created when there is a visual pathway for the eye to follow. 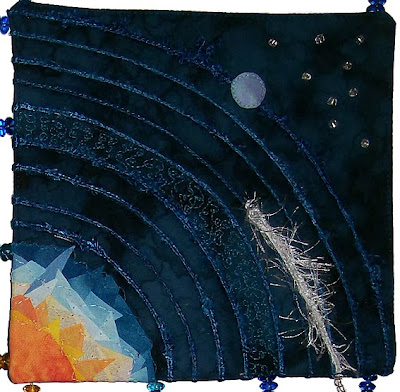 All of the pieces have movement with the couched yarn that are the planets orbits. I believe this section best represents movement with the comet. It is made with silver fun yarn that was couched to the background and a clear bead. It stands out because it is one of the few elements that isn't round.

A note about the title :
When I was working on this I had to decide whether or not to include Pluto. When I was growing up Pluto was a planet. In 2006 Pluto was demoted to a dwarf planet. I decided to include Pluto because nine makes a more interesting design layout than eight. (There are also nine stars in the four outer corners).

As always, you can see a larger view of any of the photos by clicking on them.