How to Make a Watercolor Quilt 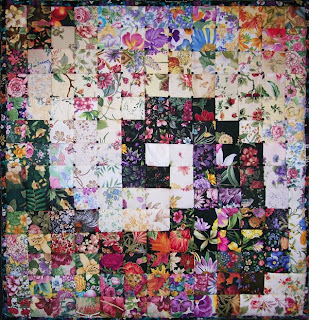 What is a Watercolor Quilt? Traditional quilts use different colors and shapes to make patterns. Watercolor quilts use the intensity of the colors and the values (light to dark) to create their patterns. The fabric is usually small squares or strips with brightly colored floral patterns. This post offers a brief description of how to design a watercolor quilt, it assumes that you already know how to make a quilt. 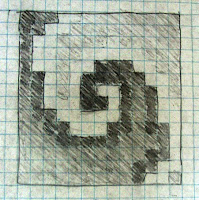 Start by drafting a design on paper. Since it's values that are important and not colors, you can use a pencil on graph paper. Make some areas dark, light, and medium in value. Figure out how many squares you'll need of each. Traditionally watercolor quilts are made of 2" x 2" squares. When sewn together with a 1/4" seam allowance, the final size of each square will be 1.5" x 1.5". 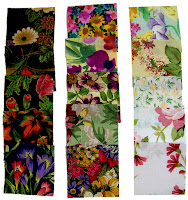 Step 2 - Sorting
Organize your 2" x 2" squares into three piles: dark, medium and light. Darks usually have a background that is black or a very dark color with foreground colors that are very vivid and bold. Lights usually have a white or very light colored background with foreground colors that are pastel or muted. Sometimes it helps to have a "medium-dark" and "medium-light" pile. 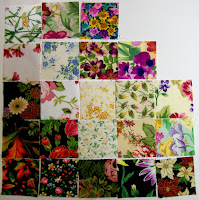 Step 3 - Arranging
Arrange your dark, medium and light squares based on your design. Step back and look at it, then rearrange squares until they fit your design better. You can rotate the squares or even use the back sides if you like that better. This is sometimes the hardest part because I'll want to keep arranging and I have to make myself stop.

Resources If you don't have lots of brightly colored floral fabrics, you can buy a set of 200 pre-cut 2" x 2" squares. You can also buy them in strips and fat quarters. A handy tool for making watercolor quilts using 2" squares is "Quilt Fuse," a fusbible webbing that has a 2" x 2" grid marked on it. Arrange your fabric on the Quilt Fuse using the grid, fuse them in place with an iron, then fold the rows over and sew a whole row at one time.

If you've made a watercolor quilt, please post a link to a photo of it in the comments section.
Posted by Pam Geisel - For Quilts Sake at 3:54 PM 2 comments:

Email ThisBlogThis!Share to TwitterShare to FacebookShare to Pinterest
Labels: 'Watercolor Swirl', how to

How to Avoid Art Scams

I've gotten the strange e-mails: someone wants to know how to make a purchase, even though my website has "Add to Cart" buttons; they say their interested in my "art" or "quilts" but don't mention which specific one; and they tell me to be sure to include my website address, which they would have if they looked at any of my quilts. I was pleased to find a website with lots of good info on how to keep from becoming a victim:

Be skeptical.
Artists are increasingly being targeted in Internet scams. After all, what artist hasn't dreamed of being "discovered" and selling several works of art to an admiring collector or a wealthy buyer? A few tell-tale signs to look for in any email you receive from a prospective buyer: misspelled words, poor grammar, and an urgent overseas buyer. They also typically want to make the shipping arrangements themselves or have someone pick the work up for them, rather than have you ship it to them - probably because they don't want the authorities to track them to a particular address. Or worse, they are looking for an excuse to enter your home.

Never ship your artwork to someone without making sure the payment has cleared.
Be aware that even though your bank may give you cash for cashier's checks and postal money orders, they can still be counterfeit. Cashier's checks and postal money orders can take up to a month to fully clear. If the payment turns out to be fraudulent, you could be held responsible for the entire amount withdrawn from your bank.

Beware if you have been overpaid for an item you are selling by cashier's check or postal money order and have been instructed to return the overpayment amount to the buyer or other party.
Never agree to return an overpayment. See explanation above.

Don't deal with persons who insist it is "urgent" or those who claim that they need the item in a hurry (perhaps for a gift).
Con artists will try to pressure you so you don't have time to ensure the funds have cleared. Honest buyers should understand that you need to wait until their check has had time to clear.

Perform due diligence if a gallery wants to exhibit your work, or a company wants to license your art.
Check with the local better Business Bureau or Chamber of Commerce as well as your Attorney General's office to find out if they are a legitimate business and to learn if there have been any complaints lodged against them. Insist on a contract with all of the terms in writing, signed and dated by both parties. Carefully scrutinize the document and read all terms of the agreement before signing. Don't sign anything you are uncomfortable with or anything you do not fully understand. Remember too that contract terms are often negotiable.

Beware of emails from a foreign government official requesting assistance in the transfer of excess funds from a foreign country into your bank account.
Again, these scam artists attempt to steal your money. The persons perpetrating these scams are considered extremely dangerous.

Safeguard your online transactions to help prevent identity theft or unauthorized credit card charges.
Purchase only from a trusted retailer or use an online payment service, such as PayPal, which allows you to shop without sharing financial information. Website pages which request financial information, such as credit card numbers, should always have a website address that begins with "https". The "s" lets you know that your personal information is encrypted when it is sent, preventing unauthorized people from seeing the information that is sent across the Internet.
Posted by Pam Geisel - For Quilts Sake at 11:44 AM No comments:

Things to Pack for an Art Show 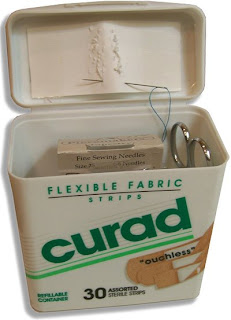 This last weekend I was at the Westerville Art and Music Festival in Westerville, Ohio (just north east of Columbus). The show is held in Heritage Park, which is a fairly large park with 12’ x 12’ booths with no one behind you. I was up on the grassy area across from the pond.

It was warm when we left. We arrived at 9 am and around 9:30 am I dropped a panel on my foot, it took off a little bit of the nail on my big toe and part of the skin. It didn’t hurt much, but it did bleed. A lot. I didn’t know the toe had that much blood in it. I managed to grab a paper towel and compress it while I looked for the bandages.
Things to pack: bandages.

The photo is not my stash of bandages. This is my emergency sewing kit. I like it because it’s made of a strong plastic. I did have some bandages packed, it just took me a minute to remember where, as it wasn’t in the obvious place.
Things to pack: sandals.Wear the closed-toe shoes while setting up and then change to the sandals.

The show started at 11 am. I was set up at 11 am. It started to rain at 11 am. It rained for three hours straight. I considered bringing a raincoat but thought that when it rains, I’ll be in the tent. What I didn’t think of was what I’d do when I went on a bathroom break.
Things to pack: raincoat.

I did have some large trash bags that I’ve carried around for the last 3 years and never used, so I got one out, cut a head and arm holes then went off.
Things to pack: trash bag.

With the steady rain was a drop in temperature, and even though it was warm when we left, I did take along a long-sleeve shirt, which I put on when it got cool.
Things to pack: sweatshirt for if it gets cool. The raincoat might be able to double for this one.

But I still wasn’t warm enough. Luckily, I had some baby quilts for sale, so I put one over my legs to keep me warm. Three years and it’s the first time it’s been cool enough to make use of some of my wares. In the middle of July.
Things to pack: quilts!

It could’ve been worse. At least it didn’t rain during set-up. It hadn’t rain the night before so the grass wasn’t wet. It was dry in the tent (mostly). And people still came to the show, even in the rain.
Things to pack: umbrella.

On Sunday, the weather was much better, sunny and cool, and the sales were better, also.
Things to pack: sunglasses, sunscreen and a hat or visor to block the glare from the canopy top.
Posted by Pam Geisel - For Quilts Sake at 3:53 PM 2 comments:

Nudge from the Universe: Sometimes it's possible to try too hard 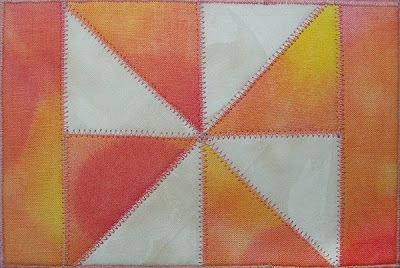 Yesterday I was making several quilted postcards when the universe reminded me that sometimes it's possible to try to hard. I was working on the last postcard and ready to be finished. I decided to use some hand-painted pink and orange fabric pieces leftover from another project. I spent awhile rearranging the fabric trying to come up with an layout that I liked, but nothing really spoke to me.

I decided to step back for a little bit and left the studio to take care of some household chores. A few minutes later the phone rang and on my way back into the studio, "Cotton Candy Pinwheels" (pictured below) caught my eye and in a flash, I knew that I should just cut the pink and orange pieces and make a pinwheel and add a border on the left and right sides. 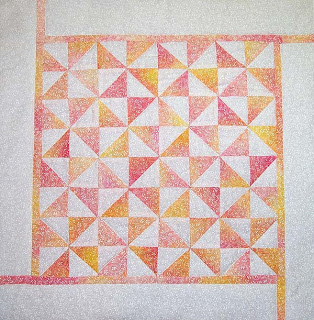 I'm really happy with the way the postcard came out, and sometimes simple is really best. It's a traditional quilt square but with non-traditional fabric. So thanks to Lovely Rita who was the one that called me. And yes, you really can send a quilted postcard through the mail.
Posted by Pam Geisel - For Quilts Sake at 8:44 PM No comments: 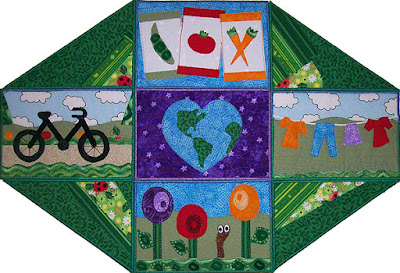 I made this piece for the DVAC Member's Show this year. The theme is "Green" so I used green fabric and also a green theme.

I made five 6" x 4" quilted postcards with raw edge images related to being good to the environment and then four triangular shaped pieces and used a zigzag stitch to hold them all together. 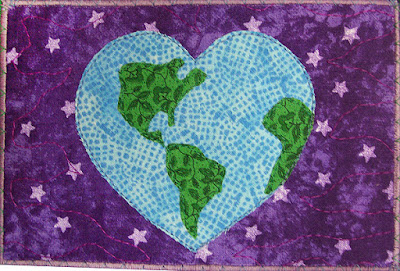 The center piece featured the globe as a heart shape on a background with stars in a purple sky. 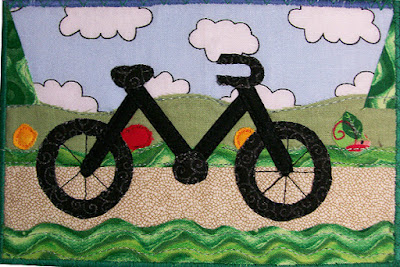 One of the things that is good for the planet is only using a car and fossil fuels for necessary trips and walking or riding a bike when possible. 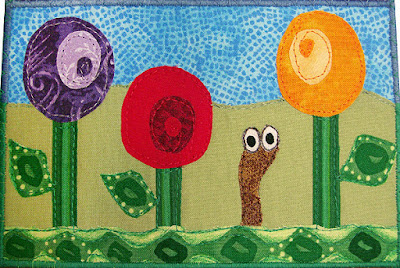 Make your flowers (and worms) happy by composting your kitchen and yard waste. 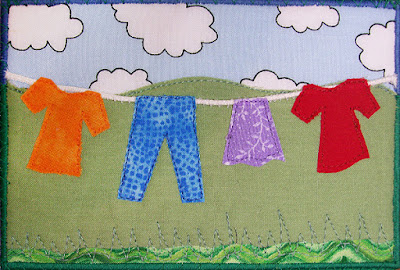 Hang your laundry out to dry in the sunshine. Most quilts usually dry quickly on the line. 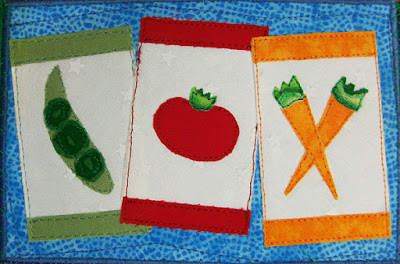 Eat more veggies. And if you can't grow your own then buy local and organic foods. 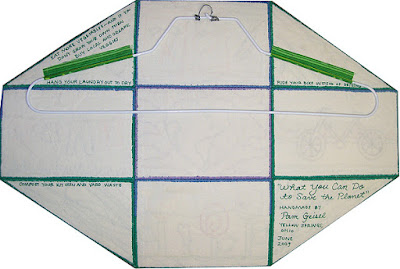 Because the pieces were on a stiff innerfacing, I didn't need a rod to hold it flat. Instead I upcycled a hanger. The green pieces are fabric sewn over the hanger to hold it.

Email ThisBlogThis!Share to TwitterShare to FacebookShare to Pinterest
Labels: 'What You Can Do to Save the Planet', art quilt
Newer Posts Older Posts Home
Subscribe to: Posts (Atom)