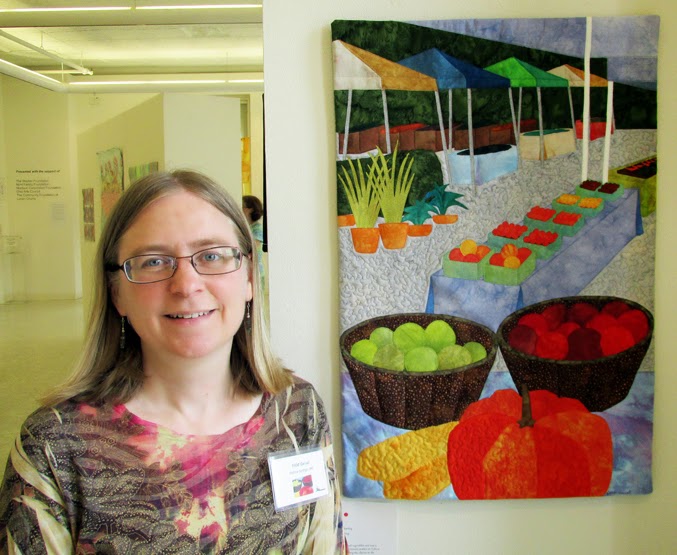 Me with my quilt “Kings Yard Farmers Market” at the Artist as Quiltmaker XVI exhibit in Oberlin, OH. See the little red dot just below the left corner? That’s right, it’s sold!

We’re recently visited several quilt exhibits in Ohio and Kentucky, so I thought I’d share it with you so you can take a virtual tour. Most of these exhibits are still happening, with the last ones closing at the end of July, so if you want to take an actual trip, you can do that. 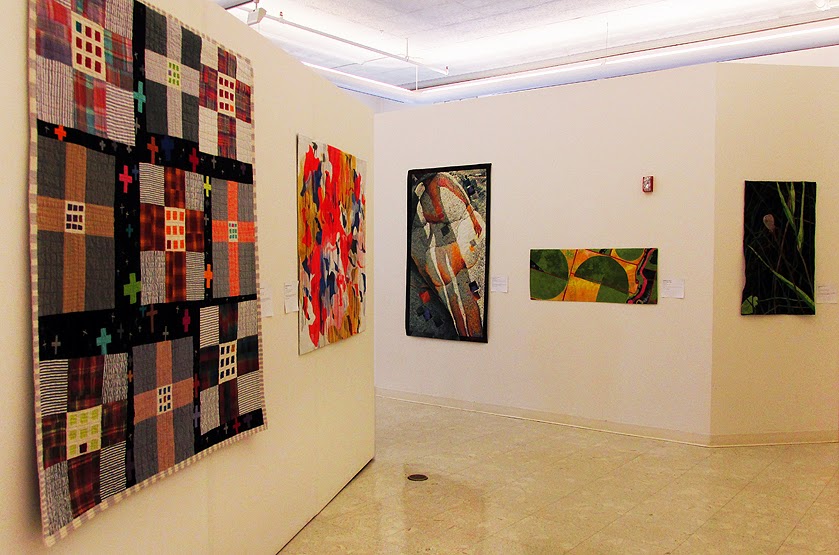 We went to Oberlin because I had a piece in the Artist as Quiltmaker XVI show. I was excited because it’s the first exhibit I’ve been in that has produced a catalog! We went for the two receptions where I was able to meet several of the other quilters.

41 pieces artists from 19 states were selected from over 400 entries, and Ohio artists were well represented.

The exhibit goes through July 27 and is presented by The Firelands Association for the Visual Arts, located in the New Union Center for the Arts, 39 South Main St. in Oberlin. The gallery is open Tue–Sat, 11a–5p; Sun 1–5p.

Also in the New Union Center for the Arts in the south gallery is the FAVA Folding Festival, featuring origami including some origami quilts by Christiane Betten. The show runs also goes through July 10 and has the same hours. 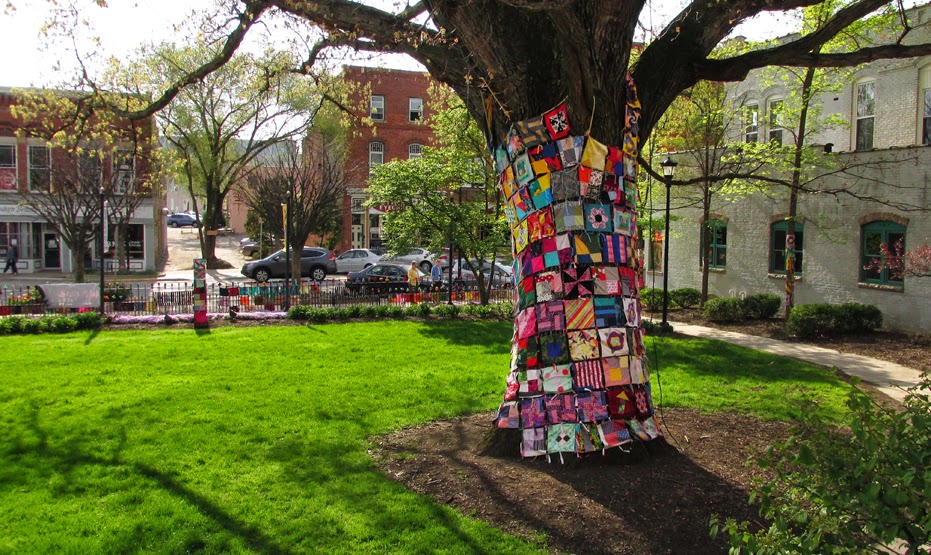 The yard in front of the New Union Center for the Arts has been quilt bombed. Volunteers created and then hung a few hundred quilt squares on the large oak tree, along the railings, and on the fence in front of the building. 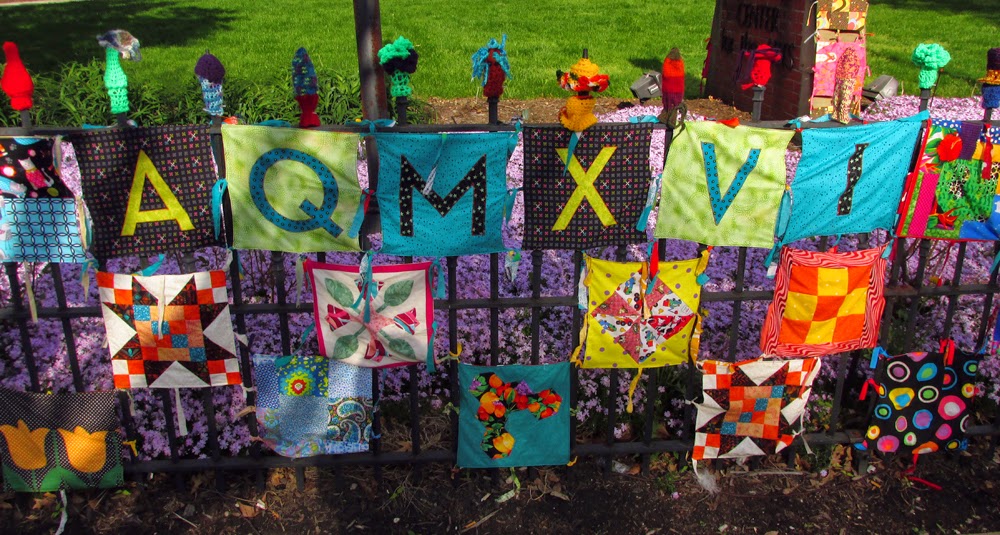 The knitters also got in the act. All of the pointy parts of the fence were covered with knitted cozies. 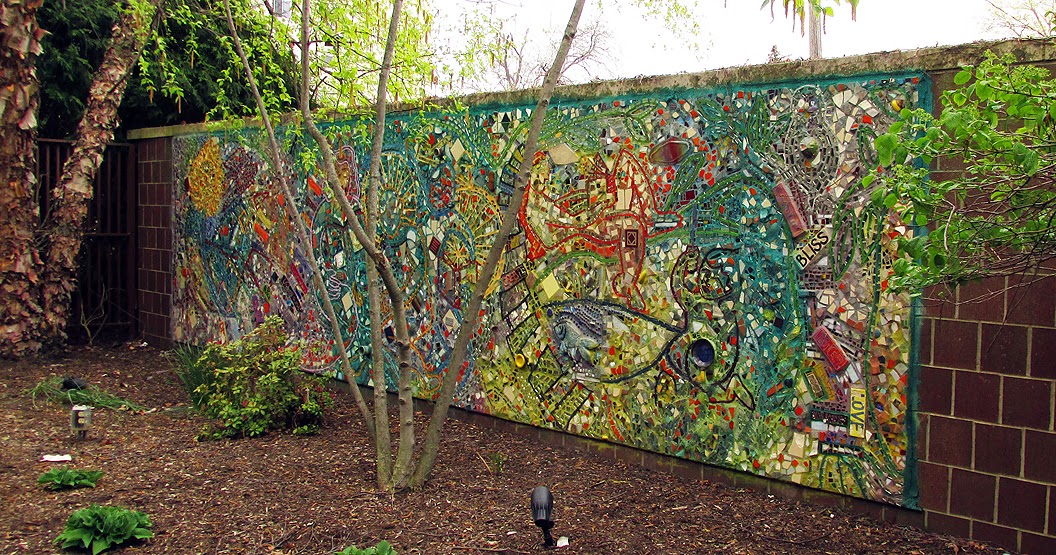 Just down the street at the Oberlin Public Library there are four display cases with small quilts in them. Their Twisted Logic: Two-Color Miniature Quilts by The Twisted Stitchers feature several intricate miniature quilts with traditional patterns and piecing. This show goes through June 8.

Quilted Narratives by Marty Young, who is an AQM XVI exhibitor, is a collection of small art quilts that tell their own stories. The show goes through July 27.

Down the street the other direction you can see Text, Line, and Traces by Tina Cassara, the juror for the AQM XVI show. Her art is in the Ginko Gallery & Studio through July 27. The gallery is located at 19 S. Main St. in Oberlin and is open T-Sa 10a-6p and Su noon-5p.

A few blocks away in first floor display the Oberlin Science case of the Oberlin College Science Center is Marking Nature: from the dye studio of Sue Copeland Jones who is also a AQM XVI exhibitor. The exhibit will be up through July 27. The building is located at W. Lorain and Woodland St. in Oberlin.

New Quilts from an Old Favorite is an annual exhibit and contest held by the National Quilt Museum (in Paducah, KY). The block selected for 2013 was “Jacob’s Ladder.” Part of the travelling exhibit is at the Troy-Hayner Cultural Center through June 15. 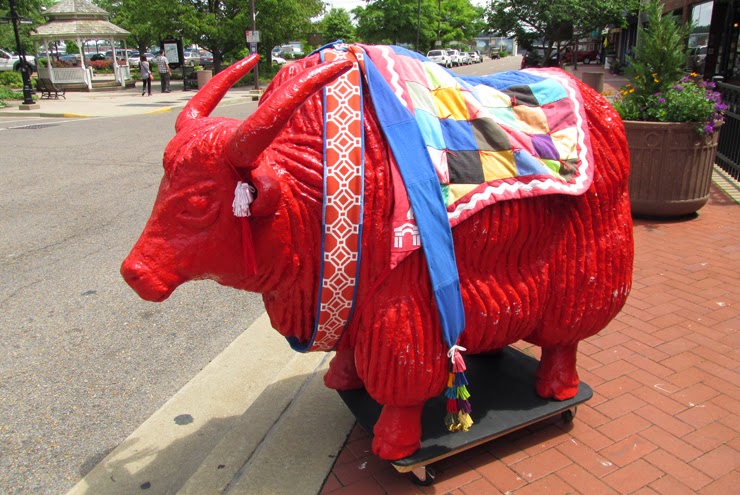 Paducah, KY, is so far west that it’s almost in Missouri. It’s also known as Quilt City, USA because it is home to the National Quilt Museum and it is where the American Quilters Society started. AQS still holds one of their several annual quilt shows in Paducah. During the second to the last week in April, the town doubles in size. I hear you have to make motel reservations a year in advance. 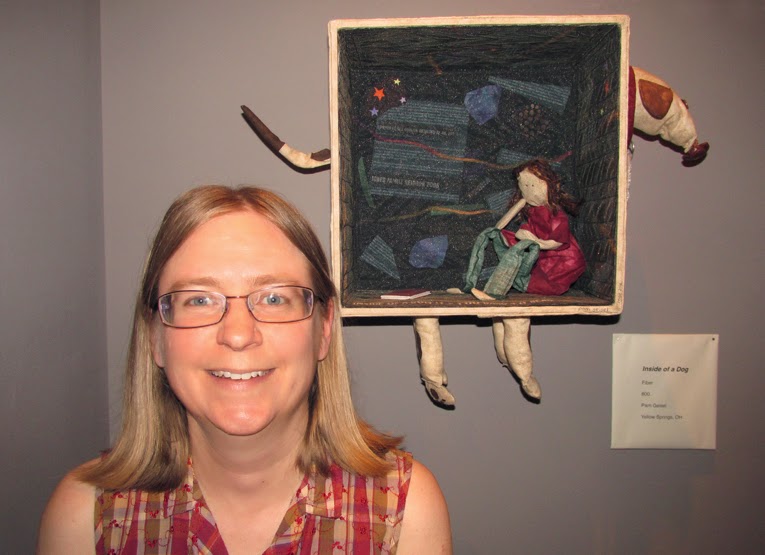 Me with my quilt “Inside of a Dog” at the Fantastic Fibers exhibit in Paducah, KY.

As well as being a pilgrimage for me, we went to Paducah because I had a piece in the Fantastic Fibers exhibit at the Yeiser Art Center, just a few blocks away from the National Quilt Museum. 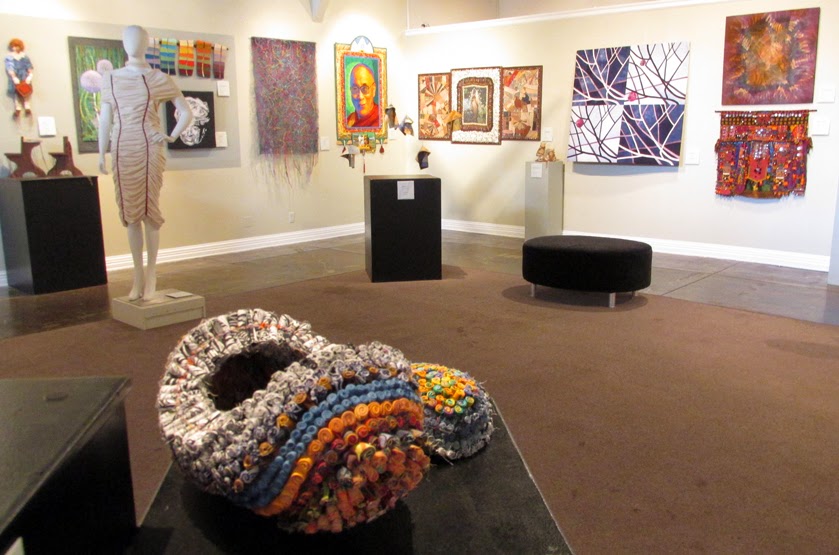 We were blown away by the fantastic fiber pieces in the show. Unfortunately the show has closed, but you can see all of the 59 entries online on their website. I felt Ohio was well represented in this show, also. 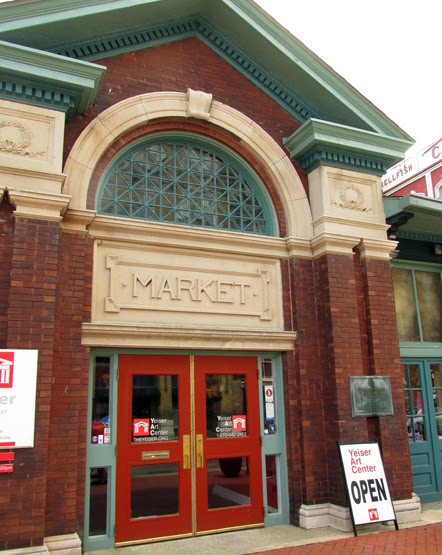 The Yeiser Art Center is located at 200 Broadway in the historic Market House, which also house a history museum and a theater. There are art galleries and restaurants on either side of the brick-lined streets. It is open T-Sa from 10a-5p when they have a show. Admission is $5.

Of course we also went to the National Quilt Museum. They own over 320 quilts and usually only have 50-60 of them on display at a time. These really are some of the best examples of quilting in the country, and they own several of the award winning quilts entered in the annual American Quilter Society shows. Quilts that probably take years to produce. Most of them are more traditional in style, and many are quilted by hand. We were in awe of the miniature quilts, and we also enjoyed the travelling show from the European Patchwork Meeting.

The National Quilt Museum is located at 215 Jefferson St. in Paducah. They are open M-Sa from 10a-5p. Admission is $11.

Paducah is also home to many fabric stores including Hancock’s of Paducah which has over 30,000 square feet of almost every fabric imaginable.
Posted by Pam Geisel - For Quilts Sake at 10:40 AM No comments:

Email ThisBlogThis!Share to TwitterShare to FacebookShare to Pinterest
Labels: 'Inside of a Dog', 'Kings Yard Farmers Market', quilt exhibits, quilts on vacation 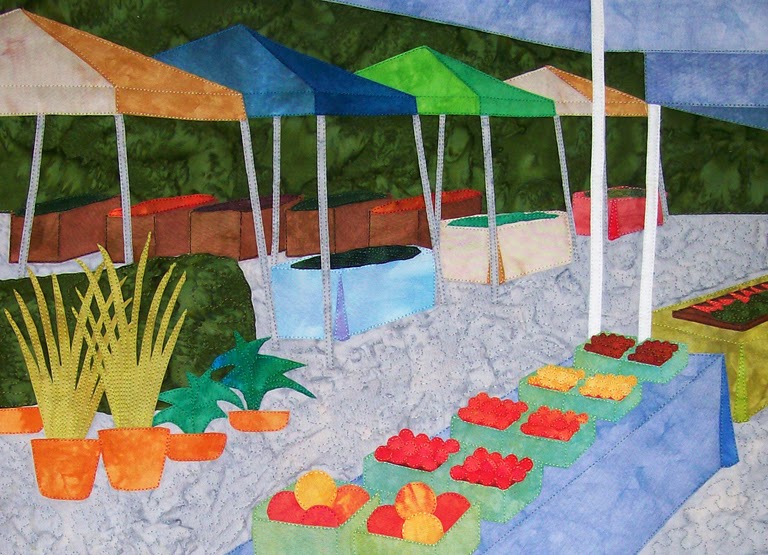 My art quilt "Kings Yard Farmers Market" is in the Artist as Quiltmaker XVI exhibit at the Firelands Association for the Visual Arts (FAVA), which is located in the New Union Center for the Arts in Oberlin, OH.

Artist as Quiltmaker is the second-longest-running art quilt exhibit in the world (Quilt National is the longest).

There are seven additional exhibits on view in Oberlin during the Artist as Quiltmaker show, most of them are fiber-related. A list of the exhibits and details are here:
http://www.aqmfava.org/quiltconnections-2014/
Posted by Pam Geisel - For Quilts Sake at 7:51 PM No comments: 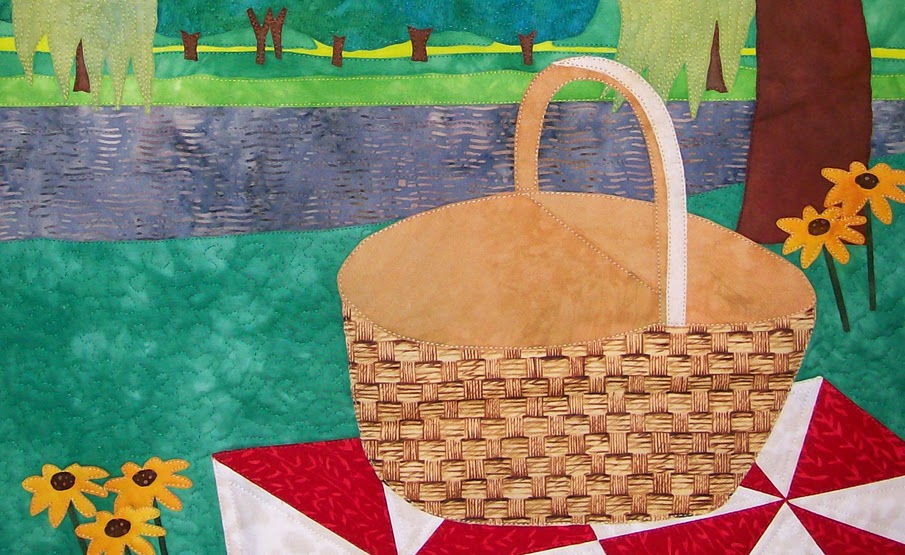 My art quilt "Picnic at Ellis Pond" is in the Ohio Designer Craftsman's "Best of 2014" show. The traveling exhibit will be at the following locations: