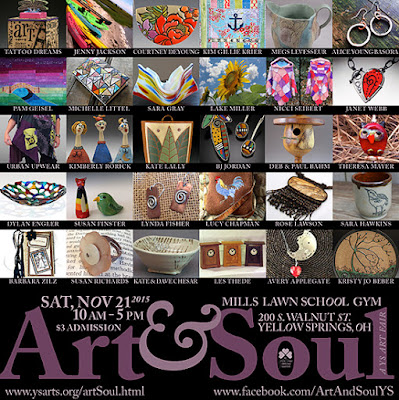 Art & Soul, features 30 exceptional artists who “put their souls into making art.” The show is this Sat., Nov. 21 from 10 am-5 pm. It will be in the Mills Lawn School Gym, 200 S. Walnut St. in Yellow Springs, just one block from the Xenia Ave. There's plenty of free parking in town and also in the lot behind the school.

You can find photos and bios of all the artists participating on the Art & Soul Facebook page (and you don't have to have a Facebook account to view the page).
Posted by Pam Geisel - For Quilts Sake at 12:02 PM No comments:

Project Quilting's Focus Through the Prism: All Seven

Here are all seven of my art quilts that I made for Project Quilting's "Focus Through the Prism" challenge. (Click on the image to see larger.)

To participate you needed to purchase a ROYGBIV hand-dyed bundle of fabric from Cherrywood Fabrics and then at the beginning of the month a traditional quilting block was posted. Participants chose which of the seven focus fabrics they want to emphasize for the month, but other fabrics could be added. All quilts are 20" x 20" and the hope is to exhibit them together in the future.

I decided to make a series for my seven, since we were already constrained my size and color palette. I made mine in a nine-patch format around a solid black center square, with 2.5" borders of black with gold stars. Along with being the most prevalent color, the focus color has triangle shapes fused onto the center black square, on the borders, and on the other colors.

The backgrounds are pieced with the Cherrywood Fabric then smaller pieces of other fabrics that are almost the same color are fused on top of it.

Each piece has a pieces of black yarn arranged in an intentional fashion and couched down. The quilting lines echo the yarn 1/4" away with black thread. All are faced so there is no visible binding.

Here are my seven, with links to the blog post about each one: 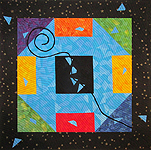 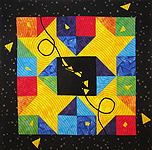 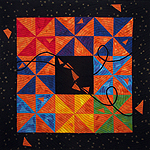 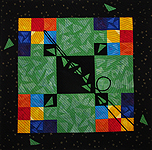 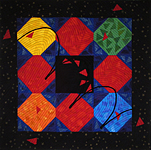 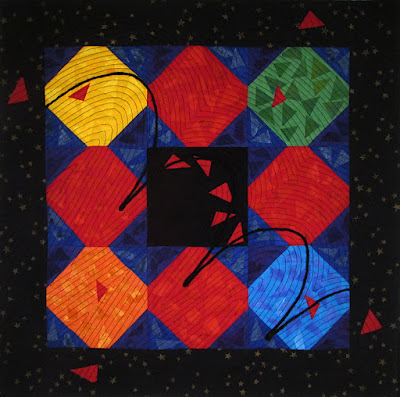 This is my seventh and final entry in the Project Quilting "Focus Through the Prism" challenge. To play along you need to purchase a ROYGBIV hand-dyed bundle of fabric from Cherrywood Fabrics and then at the beginning of the month a traditional quilting block is selected. Participants get to chose which of the seven focus fabrics they want to emphasize for the month, but other fabrics can be added.

All quilts will be made 20" x 20" with the intention of displaying them together in the future. 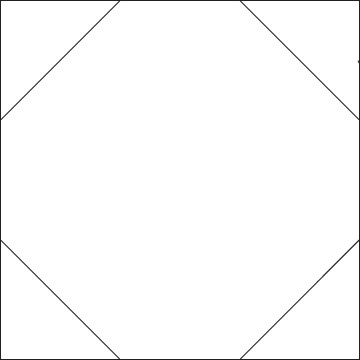 I wanted my design to be similar to the other quilts I've made for the Focus Through the Prism challenges: "Monkey Tail",  "A Second Self", "Cabin Sweet Cabin", "Positively Pinwheels!", "Chasing Geese", and "Nine Ball." 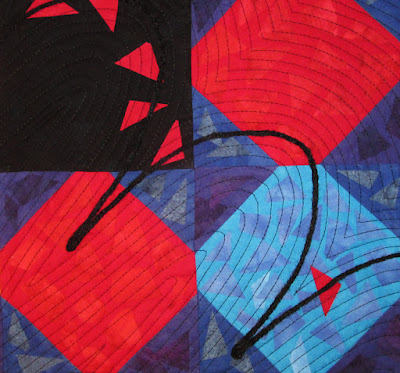 I pieced the Snow Ball blocks together around by 5" black center. I fused fabric in similar colors on top of the pieced fabrics and I used the same border fabric and couched a piece of black yarn, this time representing a bouncing ball. Then I quilted black quilting lines that echoed the yarn at 1/4" apart.

I used a knife-edge facing to bind the quilt.

To see other entries for this challenge, visit the Snow Ball link up.
Posted by Pam Geisel - For Quilts Sake at 8:26 AM No comments: 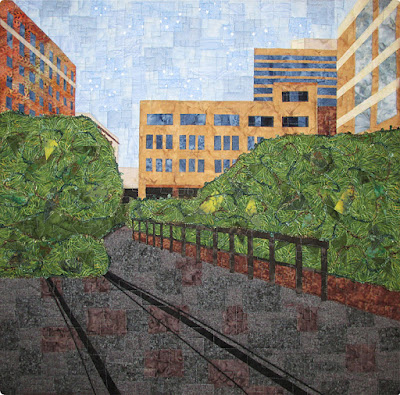 The High Line is a 1.45-mile-long linear urban park built in Manhattan on an elevated section of the New York Central Railroad that is no longer used for trains. I wanted to create a piece that explored the contrast between the concrete world and the grassland world and how they can coexist. 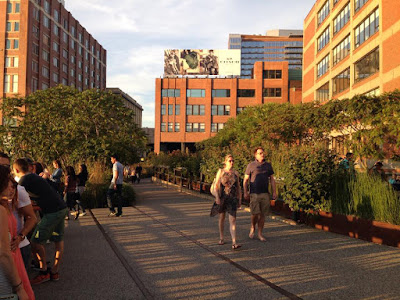 I've never been to the High Line, but have heard wonderful things about it and want to visit it soon. So I contacted my friend Lara Donnelly, who had recently moved to New York City, if she would be able to take some photos for me. She sent me several, and I chose this one because the park designers left a section of the actual railroad tracks to honor the previous life of this park. 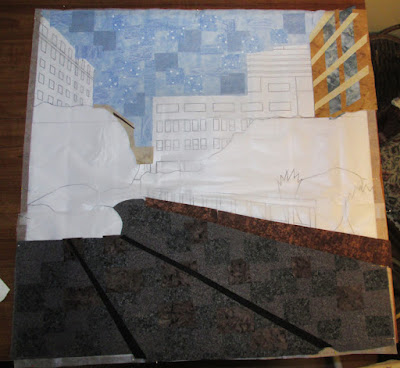 I made this quilt with the same methods I used when making the Dayton Landmark quilts. First I used the computer to trace the outlines of the buildings, windows, railing, and train tracks. I printed that out (tiled onto letter-sized paper that I had to tape back together) and placed it under a thin layer of fusible innerfacing with the sticky side up. You can see the outlines for the windows in the photo above.

I used commercial cotton and batik fabrics, placing blue pieces for the sky and gray pieces for the concrete with two pieces of black for the train tracks. 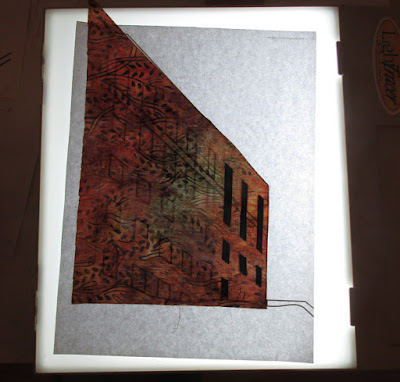 Here I am working on the building in the upper left. I had printed out additional prints of my layout but didn't tape them together and just used the parts as I needed them. I have the tracing on my light box so I can place the windows in the correct place. The windows have additional fusible webbing on the back and once they are placed they get fused with the iron. 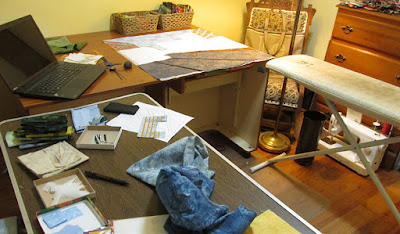 During the work-in-progress stage the studio can get a little messy. For this project I kept the laptop near by so I could check my colors when auditioning fabric. The two baskets at the top of the photo, behind the quilt in progress has just some of the fabric that I either used or considered using. The ironing board was moved close to the work table so I could easily fuse the pieces one they were placed. 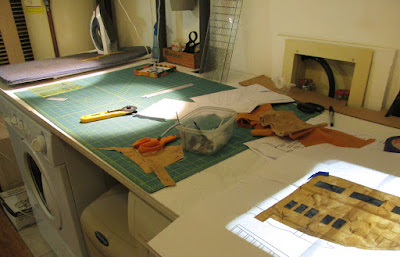 My other work area is out in the hallway. I have a board that goes over my washer and dryer which I used as a cutting area, with a smaller ironing board and my light box. Here I'm working on the middle building. 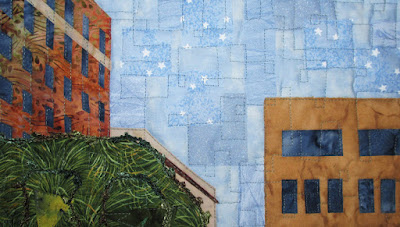 The whole quilt is machine quilted with a blue-gray thread, free-motion with overlapping squares. I moved from the sky into the buildings to catch the edges of the fabric that make up the windows. 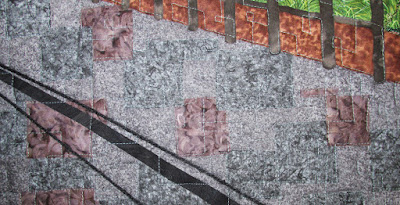 I couched some black yarn to echo the rail lines then did the same quilting in the concrete area and with the wall and railing. 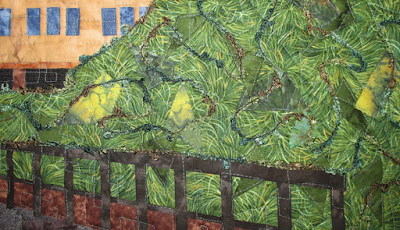 I did the same sort of quilting in the bushes but used a triangle shape instead of squares. I couched some funky green yarn along the top of the railing and in the bushes. Once it was all finished I trimmed it and added a knife-edge binding (facing).

The first week of November was unseasonably warm and it seemed strange to be working on Christmas items while the windows were open. But now it has started turning colder.

I made three birdhouses (left to right) Birdhouses on Cream, Winter Wonderland, and Birdhouses on Red. The two with the birdhouse prints have holly leaves printed on them and feature the colors red and green but could probably be put up year-round. All three are embellished with ribbons and buttons. (Click on the photos to see larger images.) 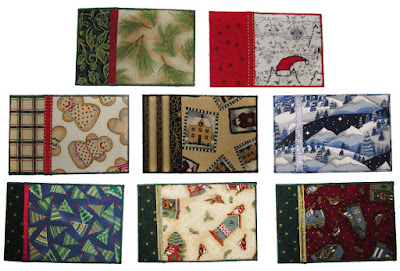 And here are some holiday quilted postcards (some of the fabric should look familiar since I also used it for the birdhouses).

The birdhouses can be found in my Etsy shop, and I'll be bringing them to Art & Soul in Yellow Springs on Nov. 21. If they don't sell there, they'll be at Village Artisans after that. Of course you can always e-mail me at PamGeiselArtQuilts@gmail.com if you're interested in something on my blog.
Posted by Pam Geisel - For Quilts Sake at 7:41 PM No comments: