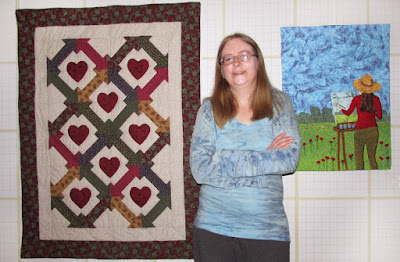 Me with my first quilt "Hearts & Arrows" which I made in a class in 2001, and my 500th quilt "She Paints With Fabric" which I finished this month

The quilt "She Paints With Fabric" is my 500th quilt! This is amazing considering that I took shop class in Junior High so that I wouldn't have to learn how to sew! I always loved art classes, and up until about 10 years ago, one of my hobbies was watercolor painting. So it seems fitting that a quilt of someone painting is my 500th quilt.

What happened ten years ago? In April 2006, I decided to start making quilts to sell. I had applied for a craft show that would take place the following November and it was time to start making items to stock the booth with.

It wouldn't be entirely accurate to state that I made 500 quilts in ten years because I had made 15 quilts before April 2006. But it does almost boil down to 50 quilts a year. (Back in 2013 I did a blog post because I'd made 52 quilts that year. What I didn't realize at the time was that was pretty average for me.)

While I've made more art quilts than other types of quilts, they don't account for even half of what I've made.

Email ThisBlogThis!Share to TwitterShare to FacebookShare to Pinterest
Labels: 'She Paints With Fabric'

She Paints With Fabric 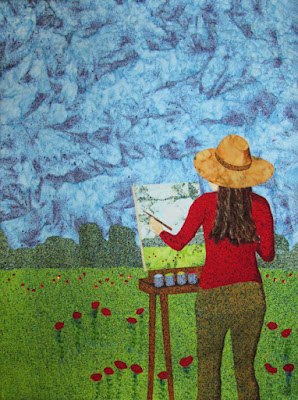 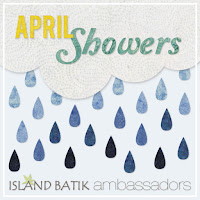 This month the Island Batik Ambassador's are creating pieces for #AprilShowersIB Challenge! The final size was up to us. but we were encouraged to use images of Spring including: umbrellas, rain gear, spring flowers, farm life, weather, bugs, plants and seeds, or pond and water. So many good inspirations! I decided to go with spring flowers, specifically poppies.

In May and June I will be exhibiting with my friend Libby Rudolf who paints watercolor paintings. It was decided that to commemorate our exhibit, she would make a painting of someone quilting and I would make a quilt of someone painting. 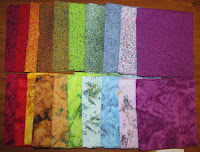 I went through my Island Batik fabrics and just like last month with the minis, I mostly used the Sea Salt Sandy fabrics. I thought they were the perfect choice since they look like they were splattered with paint. (I did use a cream-colored piece for the hand and the face from a different collection). 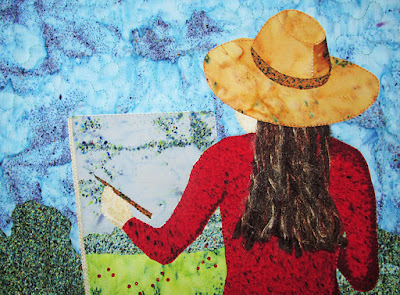 For the painting itself, I used lighter colors of fabric to keep it from disappering in the background. Her hair is yarn that was couched down. The subtle shadow on her right arm was made by drawing on with a brown fabric marker. I don't usually draw on fabrics but since these had the splatter marks it seemed like it wouldn't be too distracting. 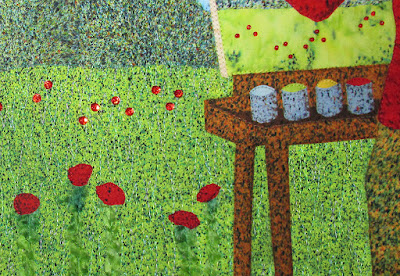 In our last shipment, we also received some Superior brand thread. I got these three spools of variegated Fantastico thread. I'm a little embarrassed to admit that I've never used Superior thread before now. I've been having some issues with thread breakage when doing free motion quilting. I wasn't sure if it was me, the machine, or the thread. Now I'm pretty sure it was the thread because this thread worked perfectly! 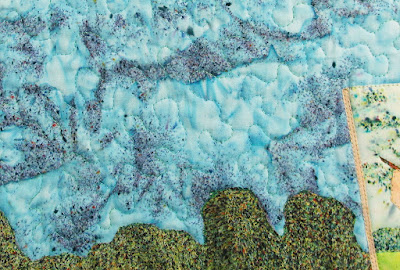 I used the blue/green thread (#5070) on the left in the sky with a large, stippling type quilting. 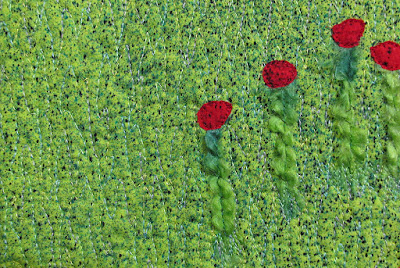 And I used the green/yellow thread (#5156) in the grass. I did a dense pattern of vertical zigzags to indicate the direction the grass was going. I also couched some thread for the poppy stems.

More about She Paints With Fabric 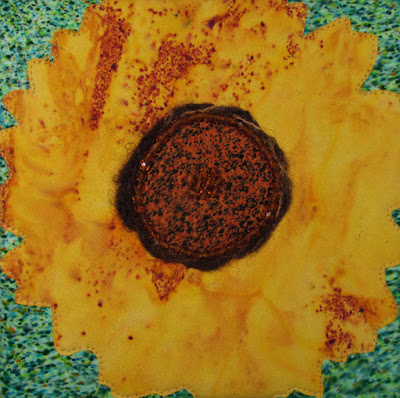 I had so much fun making the 6" x 6" mini quilts wrapped around canvas frames that I made a few more. I made "Mini Mountains" a few weeks ago, and I just finished "Sunny Sunflowers," which uses the same Sea Salt Sandy Island Batik fabrics that I used when I made the first three. (Teaser, I have another project that I'm working on that also uses the Sea Salt Sandy fabrics.) 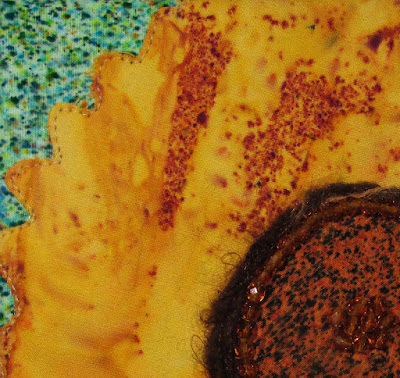 The sunflower has a brown yarn couched around the brown center, and there are glass beads that were added just inside the yarn and also in the center of the flower. 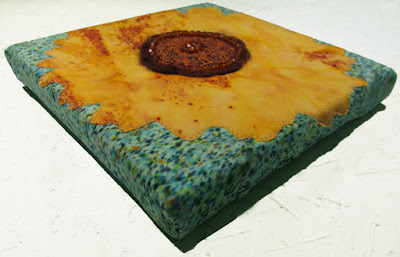 I am seriously in love with the blue-green fabric that I used for the background. It doesn't show much in the straight on shot, but since this is wrapped around the canvas frame, it's visible on the sides.
Posted by Pam Geisel - For Quilts Sake at 4:21 PM No comments: 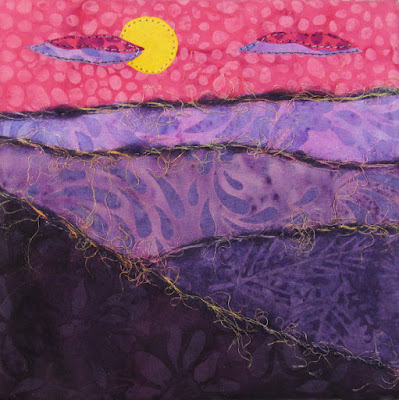 "Mini Mountains" is based on the "Lavender Mountains" piece that I made earlier this year. Both pieces are made with Island Batik fabrics, specifically four purples and two pinks from the Desert Rose Collection and a golden yellow from the Sea Salt Sandy collection. 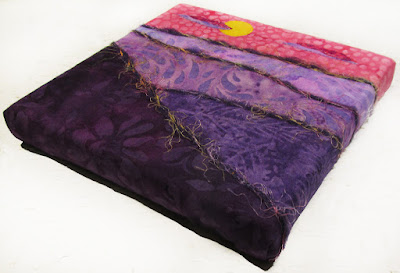 This one is wrapped around a 3/4" thick canvas frame and has yarn couched on top.

Posted by Pam Geisel - For Quilts Sake at 1:50 PM No comments: