How Does Your Rainbow Grow - a 3D art quilt 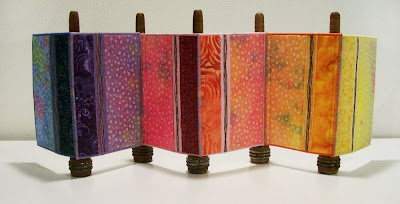 This art quilt/mini-screen took awhile to grow into the piece that it finally became. It started back in 2009 with just the purple piece which I made as a 4" x 6" quilted postcard. I usually make one or two dozen postcards at a time so this was just one of many postcards that was made that June. But there was something about this one that spoke to me, so I set it aside. 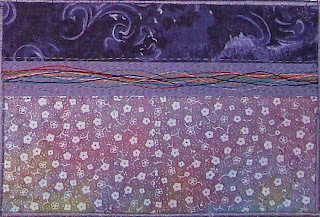 Sometime in 2012 I thought stitching them together to make a "screen" that stood up would be cool, but it didn't seem like enough. So I temporarily pinned them at the corners so they would stand and I set it on my bookshelf, waiting for it to tell me what to do next.

One day while working at Village Artisans, the local artist co-op that I belong to, I realized that one of our wood workers, Rob Liptak, uses large, thin spools to create some of his work. I decided that was just what I needed to support my piece so I asked if I could buy some uncarved spools from him.

The idea was ready, now how to actually make it work.

I butted the postcards together and sewed a large, loose zigzag sttich (using a pastel rainbow variegated thread) where they met.

As always, you can click on any of the photos for a larger view.


More about How Does Your Rainbow Grow

Email ThisBlogThis!Share to TwitterShare to FacebookShare to Pinterest
Labels: 'How Does Your Rainbow Grow', art quilt 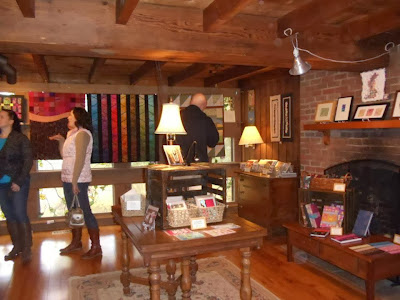 The Yellow Springs Artist Studio Tour is this coming weekend, Sat., Oct. 19 and Sun. Oct. 20, from 10 am-6 pm both days. This is my sixth year participating as a host, and this year I have four guest artists. We have 26 artists at eight locations with two new host artists and 13 new guest artists. 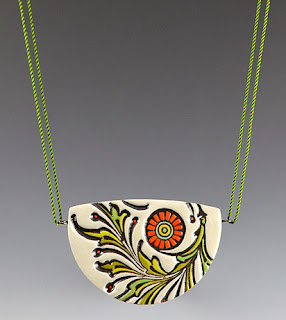 Courtney Yoakum incorporates drawing, painting and sculpture in her jewelry design. She enjoys using clay to create a surface and design that works well for delicate detail. The images are often inspired by flowers and creatures. After firing, a color pallet is selected and she paints a design using a a thin layering technique to create a vibrant finish. 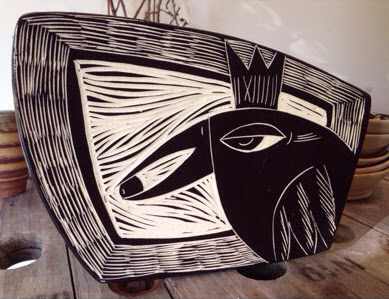 Steve Smith and Rebecca Graves from 4 Corners Studio work in a partnership creating functional stoneware pieces that are thrown on the potter’s wheel by Steve, with sgraffito surface decoration by Rebecca. Sgraffito is a decorating technique produced by applying layers of color or colors to the unfired clay and than scratching away a design to create contrasting images, patterns and textures. They will also have reduction-fired stoneware. Libby Rudolf paints watercolors, large and small, inspired by the beauty of The Glen Helen Nature Preserve as well as other natural spaces around the country. She has studied with various nationally known artists and is a signature member of the Western Ohio Watercolor Society. She paints plein-air (out in the middle of nature) whenever possible.

The tour is a driving tour. Visit the Yellow Springs Artist Studio Tour website for more information about the other hosts and guest artists and to download a tour map. Maps can also be picked up at the Winds Cafe, Young's Dairy, the Yellow Springs Chamber of Commerce, and at the artists studios the days of the tour. All studios will have red balloons and signs.
Posted by Pam Geisel - For Quilts Sake at 9:19 AM No comments: 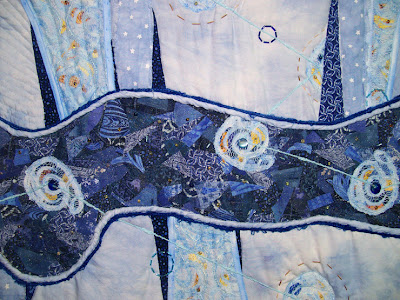 My art quilt "Cosmic Connectivity" is in the Ohio Designer Craftsman's "Best of 2013" show. When we saw this exhibit at the Ohio Craft Museum in Columbus, we were impressed by the number of incredible fiber pieces in the show.

If you like fiber art and will be near Springfield, Ohio in the next few months, you are in luck because the traveling exhibit is now at the

Posted by Pam Geisel - For Quilts Sake at 7:30 PM No comments: 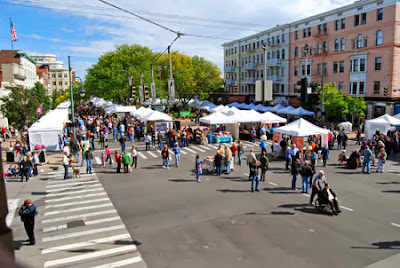 This coming Sunday, Oct. 6, 2013 I'll be at the Hyde Park Square Art Show, which runs from 10 am–5 pm. The show is in downtown Hyde Park at the intersection of Erie Ave. and Edwards Rd. Hyde Park is northeast of downtown Cincinnati. I'll be in booth #27.
Posted by Pam Geisel - For Quilts Sake at 9:10 PM No comments: