"Let a Dozen Flowers Bloom" with Best of 2012 Traveling Show 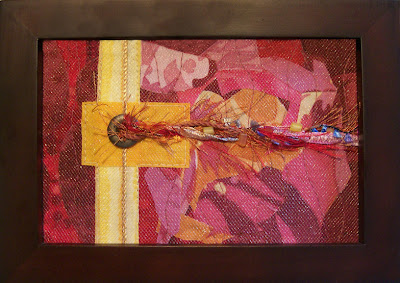 My art quilt "Let a Hundred Flowers Bloom" is in the Ohio Designer Craftsman's "Best of 2012" show and I made this small companion piece for the silent auction annual fund raising event they have every year in conjunction with the exhibition.

In the original piece the three squares are fabric mosaics (small pieces of fabric arranged, covered with tulle, then quilted in place) and the framed piece above is also a fabric mosaic. The same fabrics and yarn were used in both pieces. 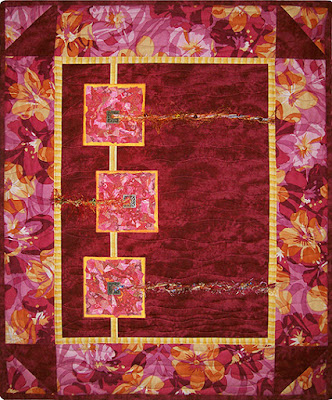 The traveling exhibit will be at the following locations:

Posted by Pam Geisel - For Quilts Sake at 9:48 AM No comments:

I was contacted by a student at Earlham College in Indiana about making a table runner using the hand-woven fabrics she and her classmates made this semester. Each had to weave 7 yards then cut them in to 19 pieces so everyone could have one. She sent me 12 to make into a table runner and also she also sent this fun photo of the students with their fabric before it was cut. 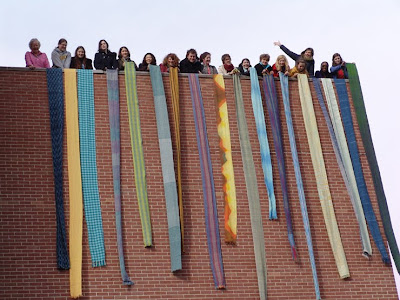 Not having sewn with hand-woven fabric, I was concerned about it stretching when it was sewn and I also decided to use a half inch seam allowance instead of the usual quarter inch.

Since I wanted the hand-woven pieces to be 4" x 6" when finished, I cut my test pieces at 5" x 7" but they slid a bit so when I cut the actual pieces I cut them at 5" x 8" so I’d be able to cut them down to 5" x 7" if something shifted. And when I cut them, I made sure to have the 8" along one of the selvage sides since it was less likely to unravel. 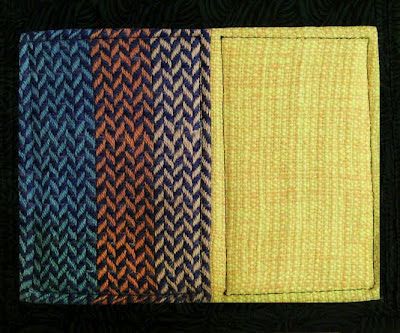 I arranged the hand-woven fabrics into color families then sewed together each pair, using a half inch seam allowance. Then I hand pressed the seams apart and top stitched 1.4" from the edge to hold the seams down.

The borders were only half an inch wide so I cut them at 1.5" and sewed them on. 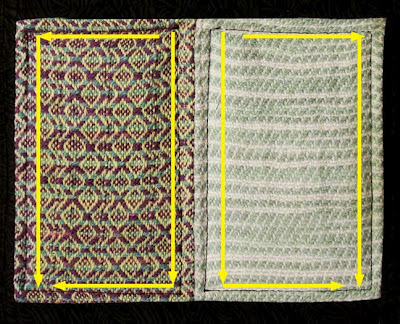 I layered the quilt top with the batting and backing fabric (the same black as the sashing and borders) then basted it. I used a black thread for quilting and quilted 1/4" from the seams, being careful to go in the same direction every time. I started in the center and quilted an “L” shape on the hand-woven fabric then started back at the beginning and quilted a reverse “L” shape. There was some stretching of the fabric but since it was the same way every time, it was easy to control.

I also quilted 1/4" from the seams in the black sashing and the black borders. Since it’s a table runner and won’t have a lot of stress on the binding like a bed quilt will, I trimmed the backing fabric 1" larger than the quilt top and batting and folded the backing fabric in 1/4" and then to the front where I machine stitched it down.
Posted by Pam Geisel - For Quilts Sake at 5:20 PM 1 comment:

Inside of a Dog: Thinking "Inside the Box" 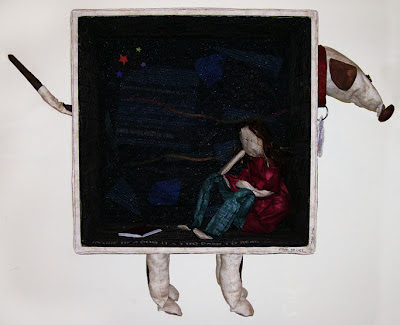 Outside of a dog, a book is man’s best friend.

Inside of a dog it’s too dark to read.
– Groucho Marx

In Oct. 2011 I was approached by the educator for the Experiencenter at the Dayton Art Institute to participate in an exhibition for 2012-13, "Inside the Box." Not wanting to pass up an opportunity like this, I said yes even though I didn’t have any idea what I’d do for my piece. We were each given a box measuring 11.75” x 11.75” and 7” deep.

A few days later I was talking with my friend Lisa, who is also participating, and she asked if I had any ideas yet. While I’m not a procrastinator by nature, I generally tend to work on whatever project is due next. Since it was October and this wasn’t due until April, I knew there was a good chance I wouldn’t do anything with it until March at the earliest.

Several days after that, we went to a Halloween party. One of our friends was dressed up as Groucho Marx. He had the whole bit down, including reciting some of Groucho’s popular jokes, which made me think of my favorite Groucho Marx quote:

Since the theme of this exhibition was “Inside the Box” I decided to use that quote for my theme. 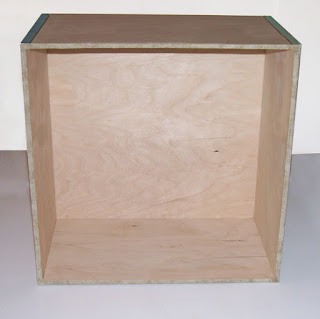 The first thing I did was assemble the box and take some measurements.

I found a piece of cream colored fabric to use for the outside of my dog. I cut it to 50” x 8” and pin basted it to a piece of craft felt the same size (since it will go on the box I didn’t use any backing fabric).

Using a matching thread, I quilted some serpentine designs across the short part of the fabric keeping .5” away from the edge. This was to keep the fabric from stretching too much. I trimmed the craft felt down to 7.25” x 44” and folded the long edges over and quilted down .25” from the edge. 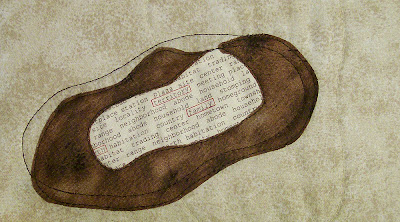 I added the “spots” on the dog by using some cream colored fabric that had text on it and some brown fabric that I fused to the cream fabric. I stitched around the spots with a brown thread but off set it so it’s more like echo quilting. 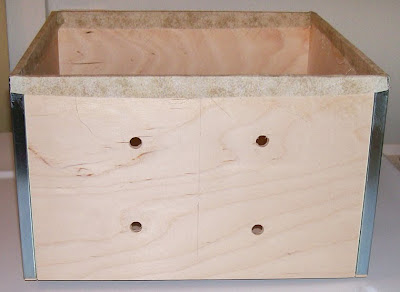 I decided where the dog’s head, legs and tail would go then I drilled small holes in the box. I lined up the cream colored fabric and made small cuts in the fabric to line up with the holes.

I glued cream fabric to the front edges of the box then glued the dog’s “skin” to the outside of the box, hand stitching where it met at the bottom. I also used some strong double-sided tape to hold the skin down.

I made the dog’s head, tail, and legs by experimenting with different shapes and batting until it started to look like a dog. I sewed on buttons for the eyes and the nose. The tail has a pipe cleaner in it so it’s somewhat adjustable.

Those pieces had several inches of extra fabric on the end and this part was pushed through the holes in the skin and the box and glued down on the inside of the box. I hand stitched around these parts to attach them to the skin. 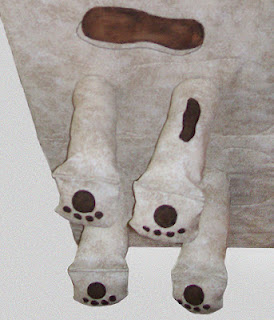 Since the box is going to be hanging on the wall, the legs do not support it, they just hang there. 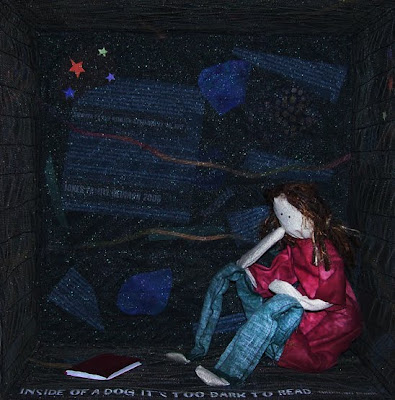 For the inside of the box I made five fabric mosaics; four for the inside walls and one for the back. I cut small pieces dark colored fabric, colored stars, and fabric that had light text on a dark background and fused them all to a black background.

The bottom mosaic includes the second line of the text “Inside of a dog it’s too dark to read. – Groucho Marx". I added some multi-colored variegated yarn then covered them all with netting and sewed everything in place.

I attached the inside pieces the same way I did the dog’s skin, with glue and a strong double-sided tape. 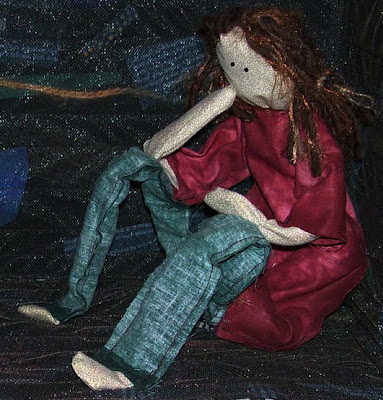 I made the doll by sewing a pair of pants and a shirt then putting them on a pipe cleaner stick figure. I used cream colored fabric for the arms, feet and head, adding stuffing to the head to fill it out. I used some brown yarn for the hair, gluing and stitching it down by hand.

I posed the doll then sewed it to the bottom and side fabric mosaics. The book is made with fabric wrapped around a piece of foam core, which is also sewn to the bottom mosaic. 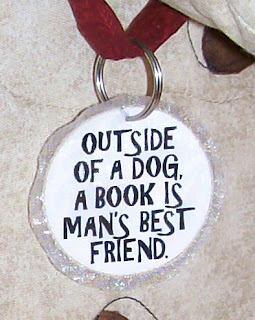 I made a dog collar using red fabric and a metal key ring loop to hold the dog tag which has the text “Outside of a dog, a book is man’s best friend” that is covered with a sheer netting. 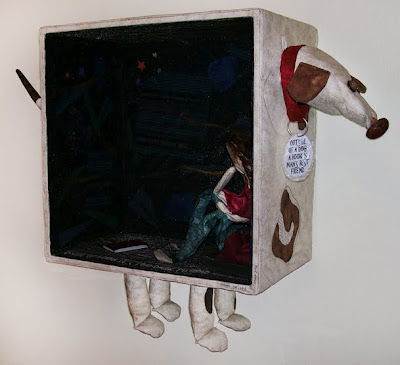 Considering I haven’t really done much with three dimensional fiber before, I’m really happy with the way it turned out.

About Inside of a Dog

Info About The Exhibit - This exhibit is located in the Experiencenter, an interactive gallery for children and adults at the Dayton Art Institute. The museum is located at 456 Belmonte Park North in Dayton, Ohio and is open Wed.-Sat. from 10 am-5 pm (and Thurs. until 8 pm) and on Sun. from noon-5 pm. The exhibit runs from Apr. 28, 2012 through April 2013 and there will be an opening reception and family day on Sat., Apr. 28, from 1-4 pm.
Posted by Pam Geisel - For Quilts Sake at 7:45 PM 5 comments:

Email ThisBlogThis!Share to TwitterShare to FacebookShare to Pinterest
Labels: 'Inside of a Dog', art exhibit

The International Quilt Festival happened in Cincinnati, Ohio this past weekend. I went on the last day of the show, so it's now over, but it will be back next year, April 12-14, 2013.

It was fun to see some of my quilting friends like Lisa and Maxine who are in the Miami Valley Art Quilt Network. I also got to spend a little bit of time with one of my on-line friends, Cathy.

And I got to see quilts by my on-line Etsy quilting group Quiltsy, and it was fun to recognize their work before I looked at the quilter's name. They all graciously gave me permission to post the photos that I took of their quilts. 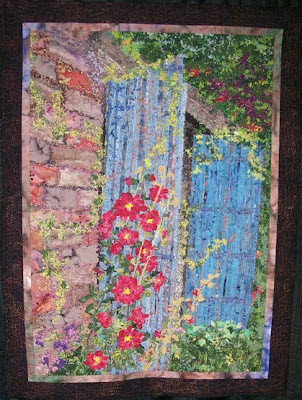 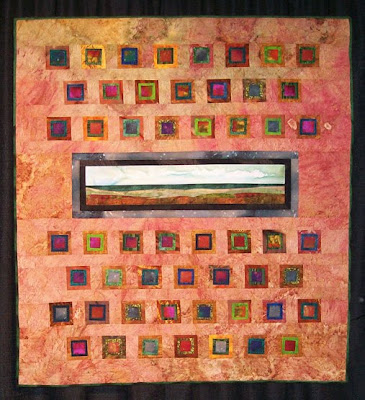 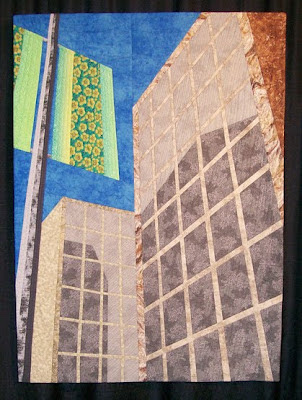 "Looking Up" by Terry Aske 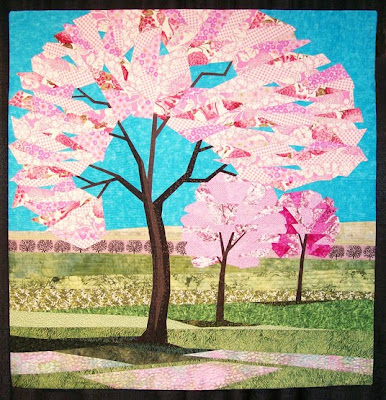 There were so many wonderful quilts to look at, some you could take photos of and some you couldn't. I was also able to take photos of the "Twelve by Twelve" quilts. They are twelve quilt artists who have created a 12x12 inch quilted art piece based on a theme or color palette. 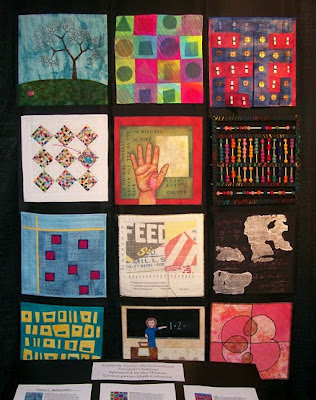 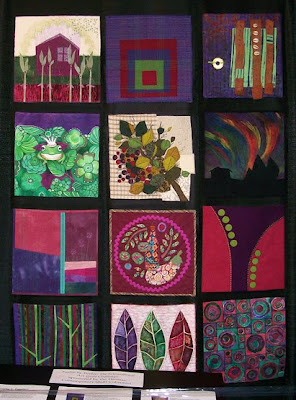 If you want to know more about the Twelve by Twelve quilts and quilters, visit their blog. Direct links will take you to the Theme Page and the Color Page.

Other International Quilt Festvial venues:
If you're going to be in Long Beach, CA July 27-29, 2012, you can see the Twelve by Twelve quilts at the there. "Looking Up" will also be at the Long Beach show, and "Spring Blossoms," "Hollyhock Cottage," and "Silkroad Treasures" will be at both the Long Beach and Houston shows. 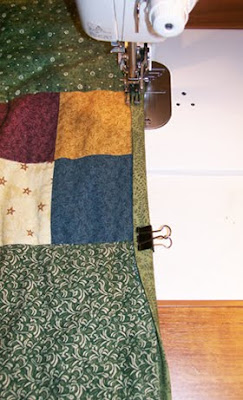 I saw a tip recently in Quilting Arts Magazine, the Oct/Nov 2011 issue (yes, I'm a little behind in my reading) about using binder clips to hold the binding on while quilting, instead of using pins.

The next day I was sewing binding to a queen-sized bed quilt and thought I'd try it out and it worked like a charm! I'm not sure if it saved me any time but it was a lot less cumbersome than using pins and I didn't have to worry about the pins catching on the quilt or each other when I moved it around on the table. And there were also no pins to stick me while I was sewing.

It seems obvious to me now, after all, they are called "binder" clips.