My Love is a Pine Tree Art Quilt - Project Quilting 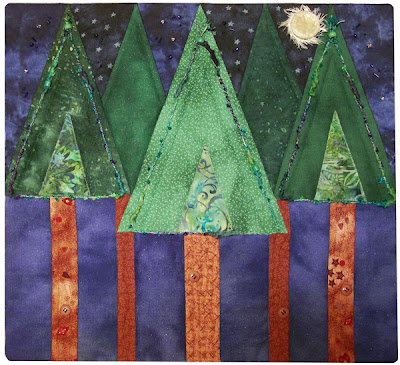 Quick recap of the challenge: "Making Music" 1. Choose a song title for your inspiration.

Because there are so many good songs that evoke wonderful visuals, it was hard to choose one. I ended up using “ThePine Tree” by Johnny Cash and June Carter. 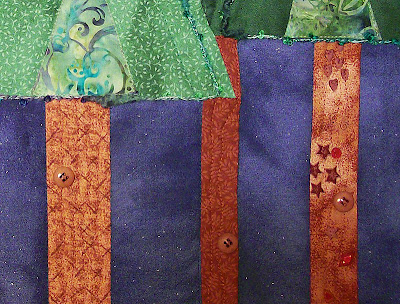 I’ve always been intrigued by how close together pine trees can grow and how sometimes the bottom half of the tree seems to be just trunk without branches. 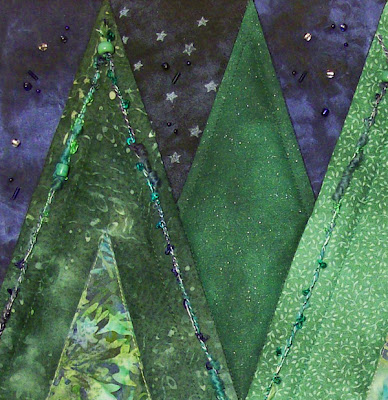 Most of the background is pieced. The three trees in front have fabric triangles that are raw edge appliqué and yarn that is hand-couched on them.

Usually when I add yarn I like to put it along the seam lines but this time I put just the bottom on the seam line (to make it disappear some) with the angles between the edge and a quilting line. There is a bead where the yarn meets at the top of the trees. 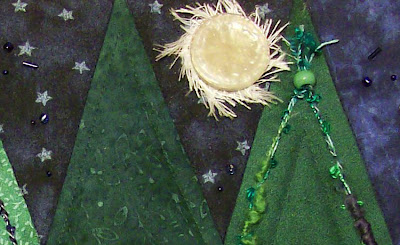 I added some beads in the sky area, a few are clear but most of them are a dark blue because I didn’t want them to stand out much but still provide some sparkle. The moon is a large button with white fun fur thread circling it to represent a lunar halo (the ring around the moon).

The moon makes me smile because it reminds me of a comedy sketch done on The Mighty Boosh, a British show.

More about My Love is a Pine Tree

To see the other entries for this challenge visit the Making Music page.
Posted by Pam Geisel - For Quilts Sake at 3:58 PM 1 comment: 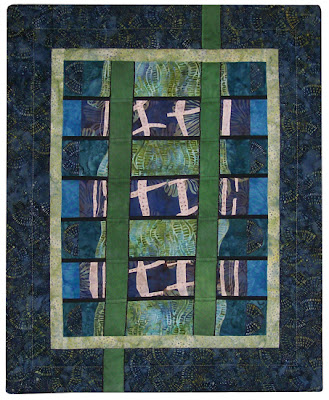 Quick recap of the challenge: "Architectural Elements" 1. Your inspiration will come from architecture.

The last few years we’ve spent some time traveling and I noticed that I was drawn to interesting architecture. So much that I took several photos of buildings because I thought they’d make interested quilt ideas. So when I saw that the first challenge for this season’s Project Quilting was Architectural Elements, I immediately started looking through the photos I took. We’ve recently been to Atlanta, Knoxville, Louisville, San Francisco, Portland, and places in between. 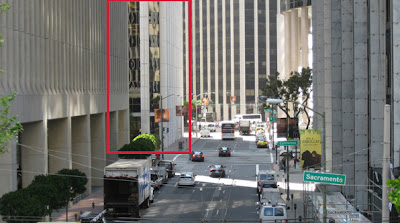 The building I decided to use for this project is in the Financial District in San Francisco. The building is highlighted by a red box and you can see some of the reflections in the window. 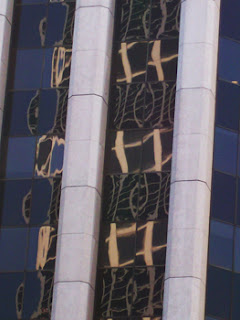 Since the photo is fairly abstract, I wasn’t trying to recreate in exactly. For one thing, there’s not a lot of color in it. And there aren’t any reflections on the far right side. I wanted this quilt to be more symmetrical so I decided to include the reflections on that side also. 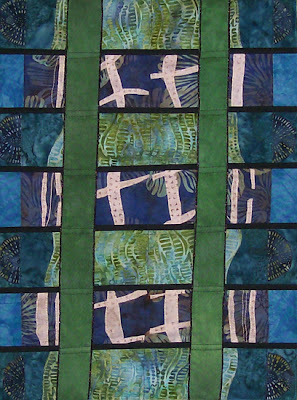 To give you an idea of the scale of this quilt, each window is 2.25” high. I decided to create the larger, lighter shapes in the windows by cutting out light-colored fabric and fusing them to the background but I didn’t want to have to do that with the smaller reflections. Instead I looked through my batik fabrics to see if I could find one with a pattern similar to the one in the photo. I found one that I thought was a good fit and it’s green with some blue in it. I also found some other batiks that complimented the green one. 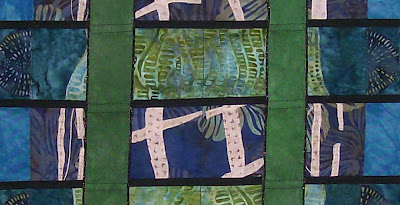 The windows aren’t exactly straight and I wasn’t sure I could piece the subtle angles so I got a piece of fabric and set the batik fabrics on top of it, fusing and stitching to hold them in place. Black bias tape fabric was used to cover the seams.

At first I thought I wanted to do the whitish columns in a light color but once I started to work with the fabric, it didn’t look right to me. I wanted fabric that would be strong enough to support the design element but not stand out too much.  I literally took out every piece of batik fabric to see if it would work and nothing really did. Then I remembered that I had some hand-dyed fabric and found the green piece which did work with the other fabrics. 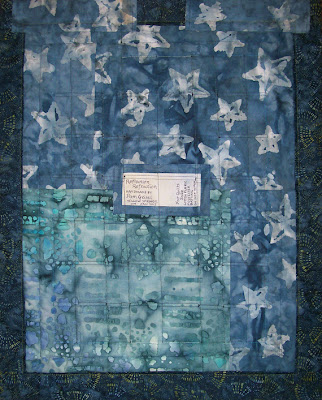 I pieced the two borders then started quilting. The quilting isn't really visible on the front but it can be seen on the back. I added some black cording on both sides of the green columns then for the binding I used a strip-facing technique.

To see the other entries visit the Architectural Elements page.
Posted by Pam Geisel - For Quilts Sake at 10:38 AM 2 comments: 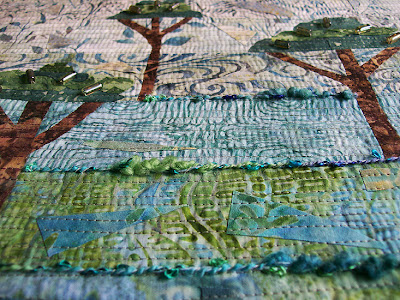 My art quilt "Three Trees" plus two of my fabric mosaics are in the Glen Helen Association Members' 6th Annual Art Exhibition will be in the Glen Building Atrium Gallery, 405 Corry St. in Yellow Springs. This show goes through Feb. 28 and the building is open Mon.-Fri. from 9:30 am to 4:30 pm and Sat.-Sun. from 10 am to 4 pm. 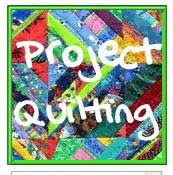 It is time for Season 3 of Project Quilting to begin. Last year I was the Grand Prize Winner.

This year will be a little different. There will be no judges but there will still be prizes. Prizes will be chosen by random from all of the participants for that challenge.

At the end of the season there will be grand prizes and each time you enter a challenge your name will be put in the drawing for the grand prize. So the more challenges you enter, the better your chances for winning.

Each challenge is posted at noon CDT and due exactly one week later at noon CDT.
Posted by Pam Geisel - For Quilts Sake at 4:23 PM 2 comments:

Carnival of Colors in the OH+5 Exhibit 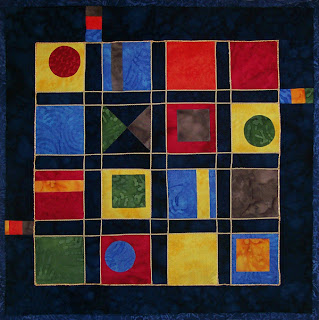 My art quilt "Carnival of Colors" is in the exhibit OH+5 2012. The exhibit features all mediums and artists from Ohio and the five surrounding states (Pennsylvania, West Virginia, Kentucky, Indiana, and Michigan).

The show takes place at the Dairy Barn Arts Center located at 8000 Dairy Barn Lane in Athens, Ohio and runs from January 13 through March 10.  There will be an artist reception this Friday, January 6 from 5 to 7 pm. The Dairy Barn Art Center is open Tuesdays through Saturdays from noon to 5 pm, Sundays from 1 to 5 pm and is open until 8 pm on Thursdays. There is a $5 admission.

I've recently made several custom quilts using T-shirts. Most of them are throw-sized quilts, usually between 40"-48" x 70"-85" depending on the number of shirts. All of the shirts are backed with interfacing to keep them from stretching out of shape when they are sewn. I like to add a solid-color sashing fabric between the shirts so the shirts are separated from each other. The borders and vertical sashing are also a solid color (or a mostly solid).

With the exception of the first quilt, all of the quilts were purchased by mothers whose kids have moved out of the house but left several items behind with requests to "don't get rid of my T-shirts." And all but one of them were given as gifts for either graduation, Christmas, birthdays, or Hanukkah. 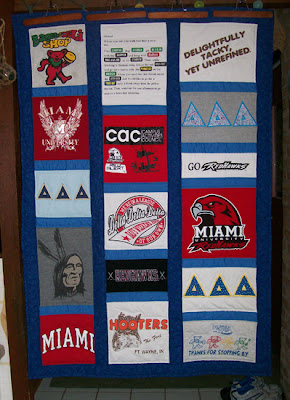 This quilt has 16 T-shirts with medium blue horizontal sashing and darker blue vertical sashing and borders. This quilt was made for a woman as a graduation gift from her friends.

I asked her friend how they got the shirts from the woman without her noticing and her friend told me that these aren't actually her shirts, instead all of her friends donated one or two of their shirts. Good idea! 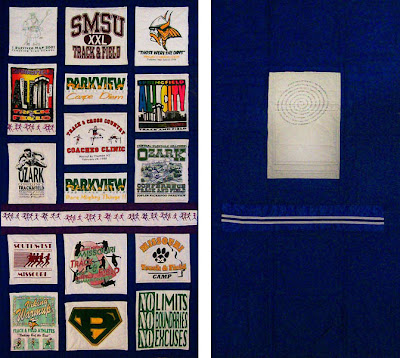 This quilt has 17 T-shirts on the front and one on the back (plus part of a pair of sweat pants). One of the shirt had people running that went all the way around the shirt so that is in the middle of the quilt going all the way across.

The sashing above and below the runners is purple and the sashing and borders on the rest of the quilt are blue. 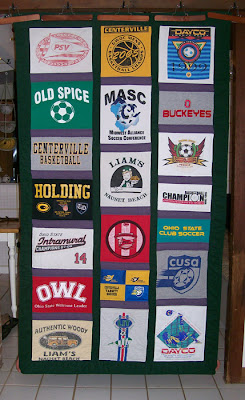 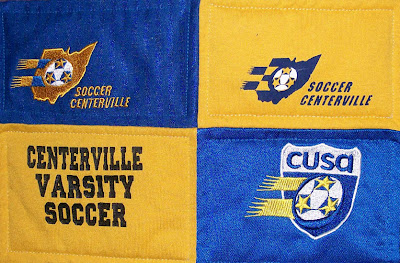 This "square" that is counted as one of the shirts on the quilt above is made of four smaller "patches" of logos that were on the sleeves or breast pocket. 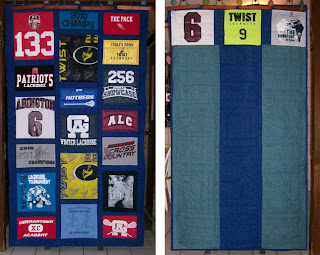 This quilt has 19 shirts on the front and three on the back and includes T-shirts and also sports jerseys. I figure that if you can wash the shirt in a washing machine and dry it in a dryer then it can be used in a quilt, although sweatshirts don't work very well. Also, any shirts that have a lot of wear will be the weakest links when it comes to caring for your quilt. 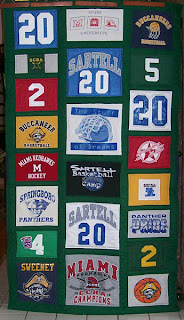 This quilt has 22 shirts and includes T-shirts and also sports jerseys. Since this quilt had a lot of jerseys and sport shirts, I used green for the sashing and borders since many sports are played on green fields. 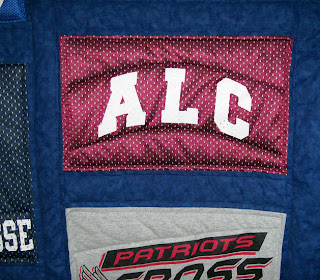 When I quilt a T-shirt quilt I like to quilt inside each shirt 1/4" from the edge and also approximately 1/4" around the image on the shirt, using thread that is the same color as the shirt. Then I quilt 1/4" inside all of the sashing and binding. 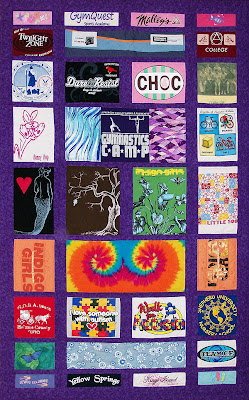 This quilt contains 60 T-shirts, 2 dress parts, 2 leotards, 1 pant leg, 1 sweater sleeve, part of a fleece blanket and 10 patches. Some of the patches are actual patches and others are smaller logos from other shirts that were appliqued on to some of the shirts.

It was a gift for a young girl on her 13th birthday. Because the shirts were from when she was younger, they were pretty small so I was able to arrange them in a grid with the smaller shirts on the edges and getting larger as they moved to the center of the quilt. 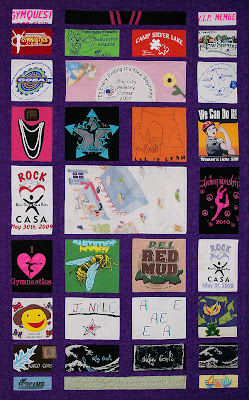 Since there were so many shirts (and other articles of clothing) this became a double-sided quilt. I aligned the purple sashing and borders so when I quilted to two parts together the sashing would line up. When it was all finished it measured 54" x 86".

For information about purchasing a custom T-shirt memory keepsake quilt using your T-shirts, visit https://www.etsy.com/shop/PamGeiselArtQuilts?section_id=23768861
Posted by Pam Geisel - For Quilts Sake at 4:29 PM No comments: