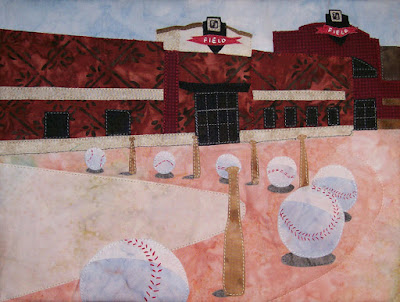 Take Me Out to the Ballgame, 12" x 9", made by Pam Geisel
Back in 2011, the art quilt group the Miami Valley Art Quilt Network decided to make some slice quilts using photos that one of our members took of Dayton area landmarks, then the quilts were displayed in several locations around town. 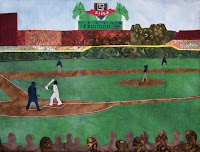 One of the exhibits was at the Dayton Metro Library's downtown branch but they were upstairs so someone suggested we could make some smaller landmark quilts to have in the display case downstairs to get people's attention for the larger exhibit upstairs.
So I made two small quilts of the baseball stadium where the minor league baseball team the Dayton Dragons play. (Here's a photo of the second quilt which has already sold.)

What a difference a decade makes! The baseball stadium, which was originally called Fifth Third Field is now Day Air Ballpark (I'm not going to change the quilt). And the Dayton Metro Library building has been torn down with a new library in it's spot. 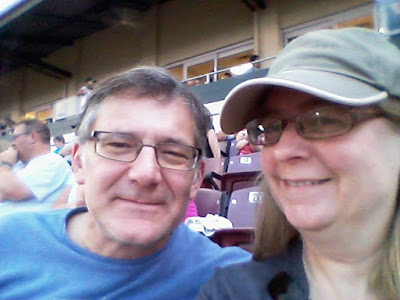 We've been to a game every year since the Dragons started playing here in 2000. Unfortunately they were unable to play last year because of the pandemic but we're hoping will be able to see a few games this year. 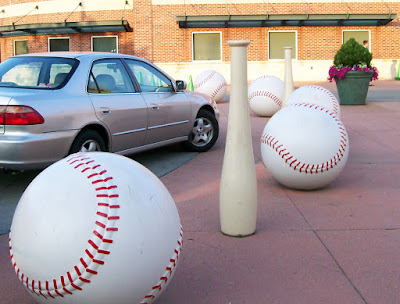 This piece was made from a photo from outside the stadium where they have large baseballs and baseball bats. Lots of people take selfies with the baseballs and bats. The photo has a car in it to show the scale of the actual balls.

Of course the quilt is not actual size and might even be considered a miniature quilt as it's slightly larger than a piece of letter-sized copier paper. The smallest baseball is the size of a dime. 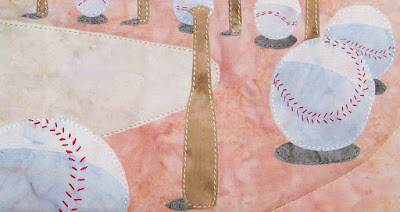 And like actual baseball, these have red stitching on them, which I did by hand.
Because this is the Quilt of the Week, it is 10% off the original price of $180 through 2/7/21 if you purchase directly from me. Details can be found here.
Posted by Pam Geisel Art Quilts at 12:58 PM

Email ThisBlogThis!Share to TwitterShare to FacebookShare to Pinterest
Labels: 'Take Me Out to the Ball Game", 2021 Quilt of the Week