I have two quilts in the "Water, Water Everywhere" annual Art Quilt Exhibit at Aullwood Audubon Center, "Floating Feather" and "After the Rain." The show features nature-themed art quilts from 28 art quilters from across the country including Lori Gravley, Debra Bently, Fran LaSalle and Mindy Marik who are members of the Miami Valley Art Quilt Network.
The show runs from June 25 through August 21 at the Marie S. Aull Education Center, 1000 Aullwood Rd. in Dayton. The center is open Mon.-Sat. from 9 am-5 pm and Sun. from 1-5 pm. There is a $4 admission.

The opening reception is this Sun., June 26 from 2:30-4 pm and I have copies of a letter that allow for free admission on June 26, contact me if you'd like a copy of the letter.
Posted by Pam Geisel - For Quilts Sake at 9:33 AM No comments:

Email ThisBlogThis!Share to TwitterShare to FacebookShare to Pinterest
Labels: 'After the Rain', 'Feather series'

Tortured Tyvek in the Miniature Show at "would you, could you In A Frame" this weekend

We survived the Yellow Springs Street Fair last weekend and are looking forward to the Yellow Springs Art Stroll (also known as the 3rd Weekend Fling in the Springs) this Fri., June 17. There are several happenings that night including the biennial "Miniature Show" at Would You, Could You In a Frame. All of the art in the Miniature Show is 2" x 3" or smaller.

Above are the two pieces I entered in the show. The pieces are unframed because the shop frames all the pieces, so I haven't seen them in their frames yet.

You might have noticed that they don't look like they are made with fabric. They are made with Tyvek, the same product that the post office uses to make their priority and express mail envelopes and what is used to wrap houses during construction as a water barrier. Tyvek can be drawn and painted on but it doesn't like heat.

On the pieces above, I painted them with green, blue and purple paints and I just love how intense the colors are. Then I put an iron on them and because Tyvek doesn't like heat, they curled up and ripped apart at some places, leaving a wonderful landscape. Then I added beads to them.

I learned about "Torturing Tyvek" at a Miami Valley Art Quilt Network meeting because someone had seen a tutorial on Joggles.com.

More about Luminous 1 and Luminous 2.

The Miniature Show runs from June 17-July 5. The gallery is located at 113 Corry St. in Yellow Springs and is open Tues.-Sat. from 10 am-6 pm. The opening reception is this Fri., June 17 from 6-10 pm. Several other galleries and restaurants will also be open late. To find out more about what's open, visit the Yellow Springs Chamber website.
Posted by Pam Geisel - For Quilts Sake at 12:50 PM No comments:

Email ThisBlogThis!Share to TwitterShare to FacebookShare to Pinterest
Labels: 'Luminous'

All That Jazz series art quilts 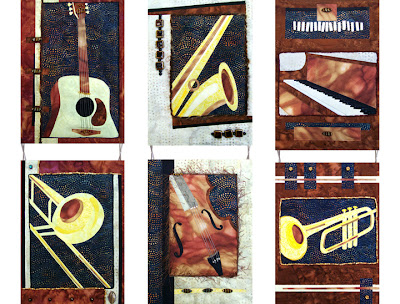 All That Jazz series: Guitar, Saxophone, Piano, Trombone, Bass, and Trumpet, all are 8" x 11"

When I first came up with the idea of doing a series of musical instruments, I knew I wanted to include a piano (because I play the piano), a trumpet (which my husband played), a guitar (which my husband also plays and frankly guitars are just cool) and a saxophone (which is also cool). I wasn’t entirely settled on a sixth instrument and decided I could figure it out as I went.

My first step was to get some reference materials, take some photos and play around with cropping and different angles. Then I used InDesign (a layout program that also has vector drawing capability) to break the instruments down to their simplest shapes. Some art quilters do this with a pencil and tracing paper but I’ve learned that I tend to fudge too much and things get misshapen. By using the computer, I can zoom in to the photo and figure out what that shape is.

Once I’m happy with the drawings I flip them then print them out and trace them on the back of some fusible webbing (since the webbing is on the back of the shapes they need to be reversed so they come out facing the right direction).

Then I fuse the shapes to the fabric, cut them out and lay them back in their correct order. I did the instruments first. 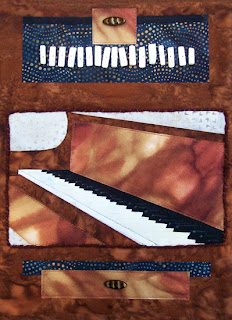 (The text describes the process but the photos are of the finished pieces.)

I started with the piano and since I was envisioning a grand piano, I made the body of the piano in blacks and grays.

Next was the bass. When I started I knew I had the perfect fabric for the body, a mottled brown and tan piece. I love the shapes of the body and the ‘F’ holes.

I made the guitar third and that went pretty well. 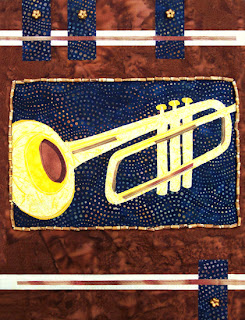 Next came the trumpet, although I wasn’t happy with the way it came out so I went back and picked a different angle, made it larger and cropped it more.

Because the other instruments were more solid, I wasn’t thinking about background fabrics but I realized I’d need to with the trumpet since it wasn’t as solid. I had a navy blue batik with lines of multi-colored dots that looked musical. 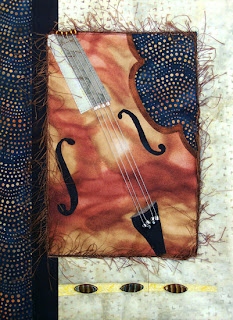 Looking at the piano I realized it would be the only instrument in black so I changed the wood on that to the same as the bass and guitar. 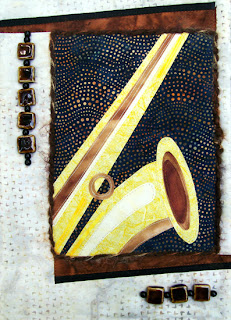 Happy with those four, I started on the saxophone which is a complicated instrument with lots of keys and rods, although fortunately it has a fairly recognizable shape.

At first I tried to include the keys but it looked too cartoonish. Similar to the trumpet I tried another angle and that worked better but it still wasn’t what I wanted. I set it aside. 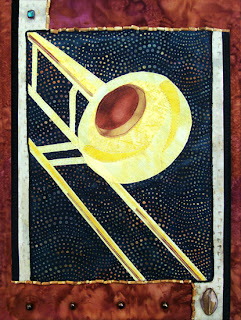 I looked for ideas for the sixth instrument. French horns and clarinets are complicated, but the trombone was wonderfully simple.

While I working on the trombone I realized why I didn’t like the sax, I was using orange fabrics. Once I changed the orange fabric to the mottled brown from the bass, things started to fall into place.

So the only two instruments that didn’t get totally reworked were the bass and the trombone. 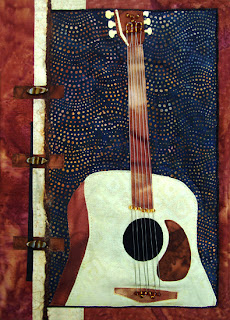 Once I got the instruments themselves complete it was time to work on the collage backgrounds.

I used some brown and cream batiks and tried to incorporate the same fabric in several of the pieces.

Since the piano, guitar and bass had black in their instruments I also black to the sax and trombone backgrounds which really made the other colors pop.


Then I quilted and bound (using my favorite facing technique) and then it was time for the fun part: embellishing! 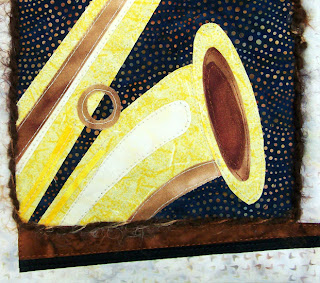 I used some small bamboo-type beads (taken from a funky necklace I got at a garage sale) on the trombone and trumpet, some brown ceramic beads on the sax, and some white mother-of-pearl beads on the piano. I also added some glass beads.

I used a nylon-coated stainless steel bead stringing wire to make the strings on the guitar and the bass. I’d decided from the beginning that I wanted to have some type of wire for the strings although I wasn’t sure how I was going to do it. It was a little time consuming but I think it was worth it in the end.

More about the All That Jazz series

Posted by Pam Geisel - For Quilts Sake at 4:59 PM No comments:

Summer hasn't officially started but it's beginning to feel like it!  And a great way to kick of the start of summer is the Yellow Springs Street Fair which is this Saturday, June 11 from 9 am-5 pm.  I've made some new quilted postcards (above) and some new journal covers featuring fabrics with peace signs.  I'll also have three of the six quilts that I made when I won Season 2 of Project Quilting.

Once again we'll have Springerles, German anise cookies made from my husband's family recipe. The cookies are $3 for a half dozen and the last two times we sold them they were sold out by 2 pm.

We're at booth #185 (if you're facing the Little Art, we'll be on the right). The Yellow Springs Street Fair is located on State Route 68 in downtown Yellow Springs.
Posted by Pam Geisel - For Quilts Sake at 4:22 PM 2 comments: