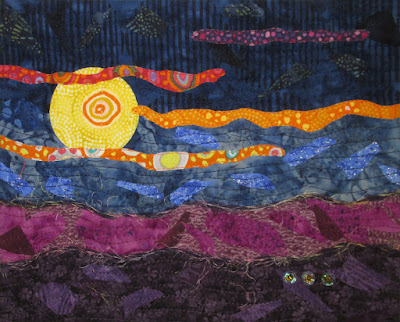 I know that not everyone has the funds and space for my larger art quilts so I made a smaller version of Millefiori Moonlight which is only 10" x 8". 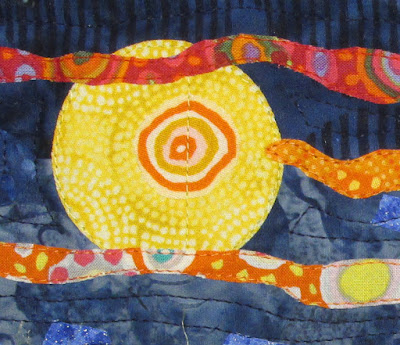 I used the layout as the original and the same fabrics including the background fabrics and the "Roman Glass" by Kaffe Fassett. 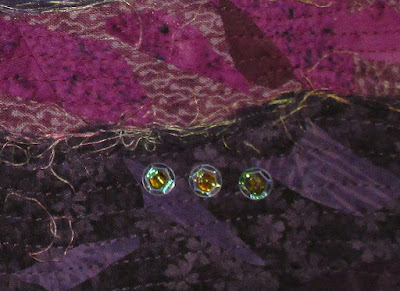 It also has the same couched yarn. I put three smaller beads where the original had larger buttons.
Posted by Pam Geisel Art Quilts at 2:29 PM No comments: 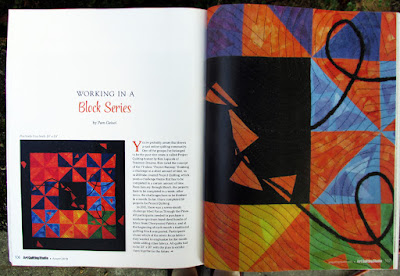 The series of seven art quilts that I made for the Project Quilting "Focus Through the Prism" challenge are featured in Art Quilting Studio's Magazine's Autumn 2018 issue. 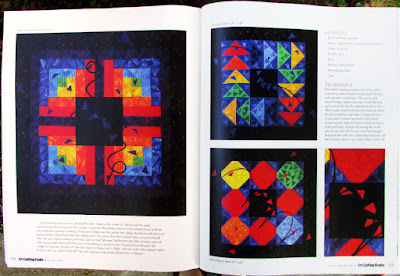 The article that I wrote gives a brief description on the though process I went through when making these pieces and some of the techniques I used. 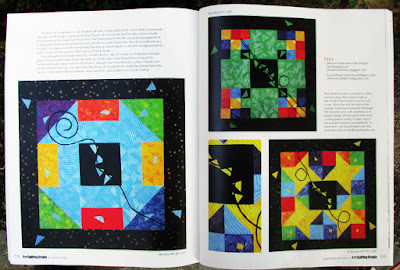 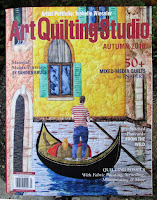 Art Quilting Studio, which used to be published only two times a year, is now published quarterly! It is packed full of new quilting techniques and innovative design ideas.

It is one of many publications put out by Stampington & Company. I've heard it's available at some Joann stores. You can find a store near you where it's sold or order it directly from the Stampington website.
Posted by Pam Geisel - For Quilts Sake at 9:33 AM 4 comments:

Email ThisBlogThis!Share to TwitterShare to FacebookShare to Pinterest
Labels: Project Quilting Focus Through the Prism, publications 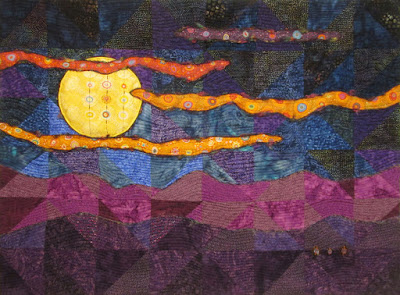 My initial inspiration for this quilt was the colorful sunsets we’ve been having due to the wildfires out west. I knew I wanted to make a quilt that was primarily dark cool colors (blues and purples) with some pops of warm colors (yellows, oranges, and reds). 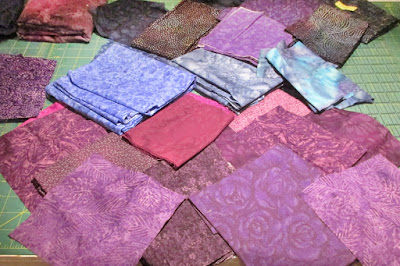 First I got out all the blues and purple fabrics (commercial cottons and batiks) and pulled out the ones I thought would work. I didn't use all of the ones in this photo, but I did use most of them. I pieced the background with half square triangles and with the blues and a few blue/purple fabrics for the sky (getting a little lighter where the moon would be), the dark purples for the bottom mountain range, and the plums for the middle mountain range. 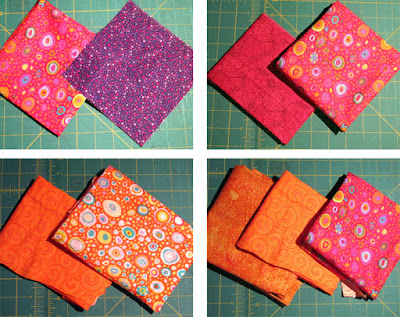 As I was selecting fabrics to use, I was also inspired by some fabrics called "Roman Glass" by Kaffe Fassett for Westminister Fabrics that had color circles on top of other colored circles, but I thought they were too dense for my needs so I cut the circles out and fused to other fabrics to create the clouds. I also fused nine of these circles to the moon. 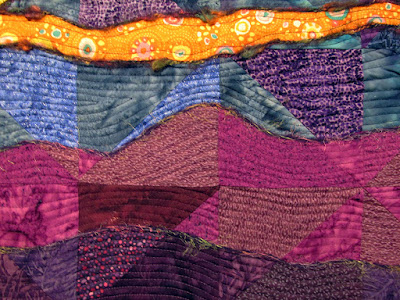 With the piecing and raw edge applique done, it was time to quilt! I used navy blue and purple threads to quilt lines that echoed the clouds and mountain ranges with the lines being 1/4" apart and mostly running horizontal. 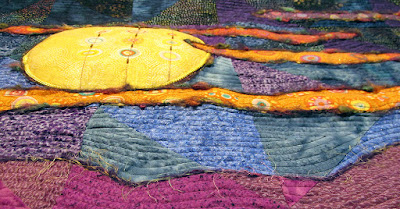 There is no quilting on the moon and since the quilting around the moon is so dense. it puffed up away from the background. I stuffed a few extra pieces of batting behind the moon to help it stay puffed. I also couched yarn around the mountain ranges, the clouds, and the moon. 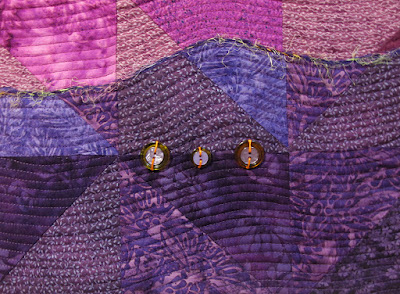 I hand sewed six buttons (as pairs) in the lower right corner to help balance the moon in the upper left corner. I also added some glass beads to the moon. I finished the quilt with a knife-edge binding. 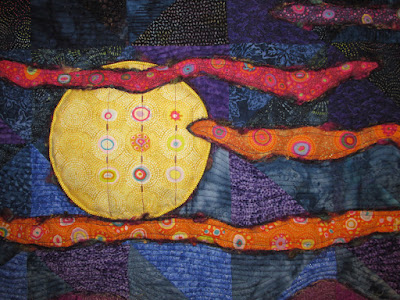 The layered fabric circles reminded me of millefiori which is an Italian glasswork technique with multicolored patterns which are viewable only from the cut ends of the glass cane, and this also gave me the name for the quilt. Now that I think about it, the Kaffe Fassett fabric was called Roman Glass so I think we're on the same wavelength.

As always you can click on the photos to see them larger.

Posted by Pam Geisel - For Quilts Sake at 4:19 PM No comments: