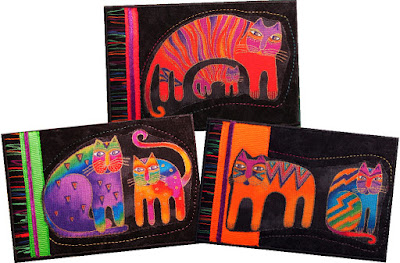 Some part of your project must be fussy cut.
I don't do a lot of fussy cutting, which is when you cut the fabric in a way that singles out an image or motif instead of just cutting randomly, but I have done some including the Celestial Winter wall hanging and the way I cut and arranged the stripes for Rainbow Heart. 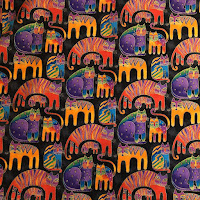 My stash mostly consists of batiks and fabric that is tone-on-tone (so it reads as a mostly solid color without being a solid color) but I do have one yard of Laurel Burch Cat fabric that I've been hesitant to cut into. There are only 3 repeats so I decided to make three postcards.
Originally I was going to make three mug rugs but the cats were a little on the small side so even when I added the striped fabric on the left and the colored ribbons, there would have been a lot of black space around the cats so I decided to make fabric postcards instead. 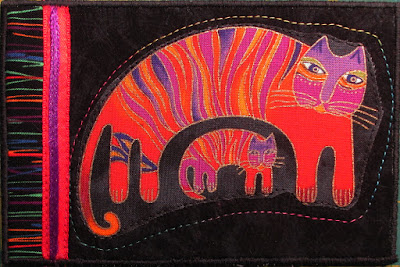 I've found when doing fussy cutting that will be fused it helps to iron the fusible to the back of the fabric first. You can see in the photo of the whole fabric that the cats are printed fairly close together. They are on a dark gray background so I fused them to a piece of fabric that had black and dark grays on it (the same black piece that I used for the background of one of my other fussy cut projects, Celestial Winter). 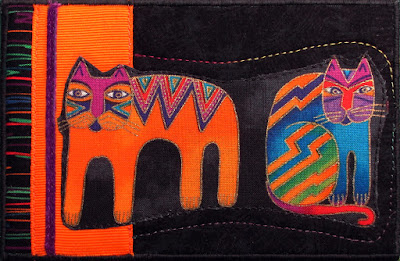 I added a striped fabric to the left and different colored ribbon either next to or behind part of the cats. I added a thin purple ribbon to all three postcards. I fused these fabrics to a stiff interfacing (which makes it a postcard) then I sewed down the ribbons with matching thread, sewed around the edge of the cat fabric with black thread, then went all the way around the cats with a variegated rainbow colored thread. 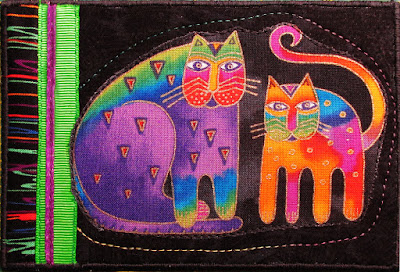 Then I fused a piece of white fabric to the back and did a satin stitch (a really tight zigzag stitch) around the edges.
(Note to my mother who reads my blog...I believe you gave me that striped fabric many, many years ago. Do you remember it?)
= = =

To see other entries for this challenge, visit the Fussy Cut page.
Posted by Pam Geisel Art Quilts at 6:07 PM

these are so sweet ;)

Laurel Burch Cats? Always a fan favorite!! Who wouldn't want to get one of these in the mail?!

Such a great print (I love Laurel Burch fabrics) to create a trio of fun quilts!! The strip and ribbon is a wonderful addition.