It's a little out of season but I recently made these two autumn table runners. They are both on the large side so I borrowed a friends large dining room table to take my photos.

The long rectangular one has rectangular fabrics that blend from a yellow gold through rust orange to a deep red and the border has autumn leaves in it. 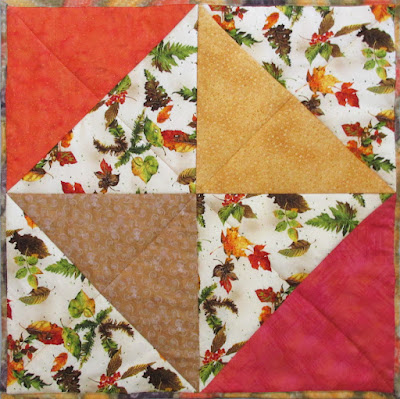 The square one is done in a traditional "Broken Dishes" arrangement with triangles of yellow gold, warm brown, orange, and red and the background triangles have autumn leaves.

Posted by Pam Geisel Art Quilts at 6:53 PM No comments: 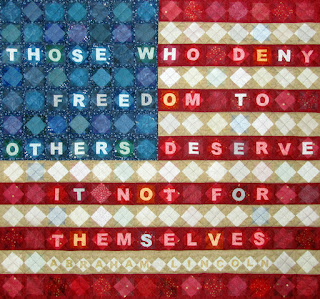 I had an idea to make an art quilt with a patriotic theme and using an American flag seemed like a good way to arrange the letters on the stripes. I did a quick mock up and really liked how it looked. When I refined my idea I did spend some time working with a flag that is the actual dimensions of a flag but they are twice as wide as they are tall and that ratio wasn't working for me, so I decided to use my artistic license and go back to my quick mock up, even if it wasn't the correct dimensions.

Next it was time to chose a quote. For most of my other word quilts, the words came first and the image second. But this time I worked backwards. I searched patriotic quotes and found quite a few that I liked but they had to be able to be broken down into somewhat equal length chunks and this quote ended up working the best. This quote had a nice balance because the words and combinations of words all had even numbers so there are the same number of blank squares on the left and right side of each row.

The other quotes that I considered were:

May we think of freedom, not as the right to do as we please but as the opportunity to do what is right - Peter Marshall

True patriotism hates injustice in its own land more than anywhere else. - Clarence Darrow

Our country is not the only thing to which we owe our allegiance. It is also owed to justice and to humanity. - James Bryce

The love of one’s country is a splendid thing, but why should love stop at the border.  - Pablo Casals 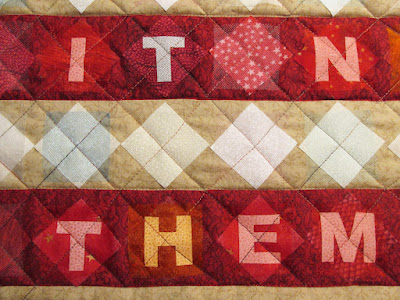 Now to create the quilt. Like the other word quilts I traced the letters in reverse onto fusible webbing, fused those to a white fabric, and cut out all the letters. The letters were then fused to either a red or blue diamond shape, depending on where they would end up. 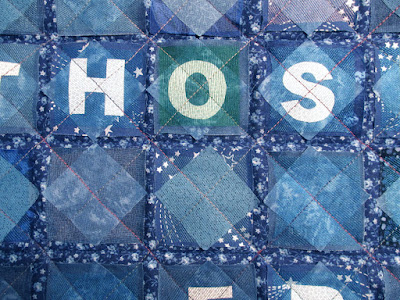 Because I already had the red and white stripes I did not add another colored square in those areas but I did to the blue section where I tried to used many blue pieces that had stars printed on them. (Some of the red diamond fabrics also have stars on them.) 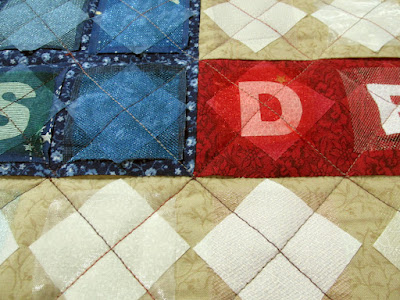 All the diamond shapes got a piece of sheer fabric on top. Some of the sheers were in the expected colors of red and blue but others were orange, green, and pink which I thought added a nice subtlety to the quilt. The whole piece is quilted with "x" shapes through the square/diamond shapes using a variegated red and blue thread. 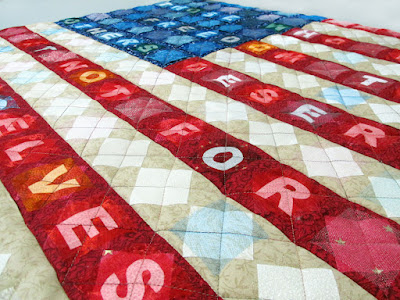 The quote comes from a letter that President Lincoln wrote to Henry L. Pierce declining an invitation to speak at an event honoring Thomas Jefferson. I named this piece "Letters from Lincoln" since I literally cut out fabric letters to put on the piece.

More about Letters from Lincoln

Posted by Pam Geisel Art Quilts at 2:22 PM No comments: 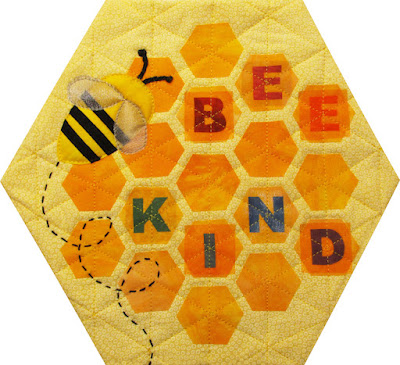 The hexagon shape is a common shape in quilt patterns, although in order to piece them together you have to do what is called an inset seam, which is when three fabric edges meet in a single junction when sewn together, with the angles different than 90 degrees. This is a tricky skill that I haven't really mastered but if I leave a little space between the hexagons and fuse them to a background, they look like a honeycomb.

The shape of the whole piece is also a hexagon and I used my favorite facing method to bind it and it went easier than I expected, possibly easier than the usual 90 degree corners. 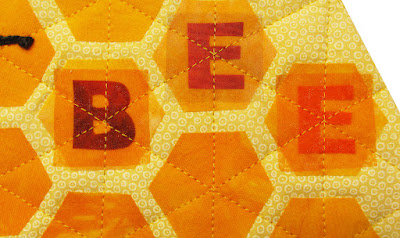 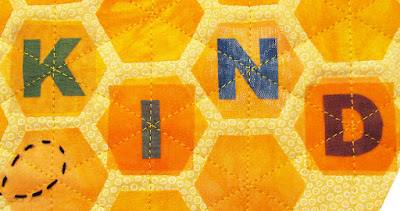 With the exception of the backing fabric, the rest of the fabrics are hand dyed, with the letters "B E E" in warm colors (reds and orange) and the "K I N D" in cool colors (green blues, and purple). 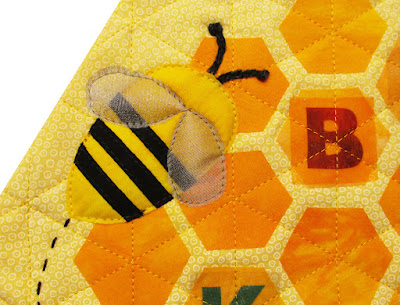 Along the left side of the piece is a honey bee floating along. The body and the wings are all appliqued along the raw edges, the winds are made with a silver sheer fabric, and the antenna are couched yarn with knots on the ends. 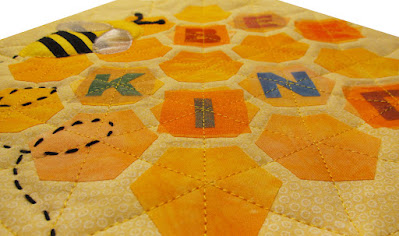 The hexagons and letters are quilted with a yellow thread that crosses over the hexagon shapes three times creating diamond shapes. The bee's flight path is indicated with a dotted line hand quilted with black embroidery floss.

Posted by Pam Geisel Art Quilts at 4:29 PM No comments:

Be a Spark on Exhibit with Best of 2022 Travelling Show 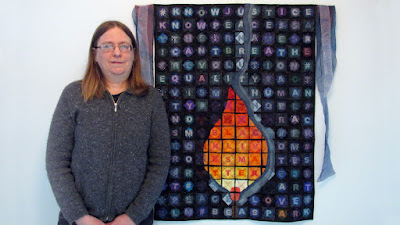 Posted by Pam Geisel Art Quilts at 1:00 PM No comments:

Email ThisBlogThis!Share to TwitterShare to FacebookShare to Pinterest
Labels: 'Be a Spark'

The Persistence of Pluto 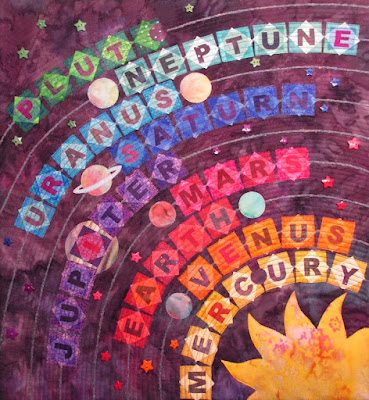 If you're like me, you learned that there are nine planets in our solar system. Some facts about Pluto:

Even though Pluto is no longer considered a full-fledged planet, it still persists, orbiting around the sun.
After working up the design for this quilt, the first step was to select the fabric. I'd recently organized all of my colored scraps so that made the process easier although I'd need nine colors and technically there are only seven colors in the rainbow, so I added a hot pink for Mars and a teal green for Neptune. I'd originally started with the traditional rainbow order of red for Mercury but at the last minute decided to start with the yellow for Mercury since it was the closest to the sun.

I thought I wanted a deep black for the background and looked at fabrics online but then decided to go with a deep purple, which luckily I had a large piece of purple batik in my stash. I basted this fabric to the batting and backing fabric and pinned the sun in place then started quilted 1/4" lines echoing the orbital paths around the sun. 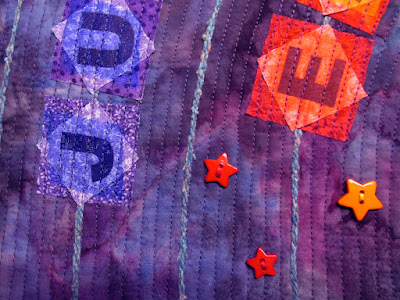 Then I added the colored squares, diamonds, letters, and sheer fabrics and quilted on top of the already quilted lines, tucking Jupiter behind the letters but putting the other planets next to the letters, with the exception of Pluto, who's "O" is the planet, and Mercury, which didn't have room next to the letters so it's between the "C" and the "U". 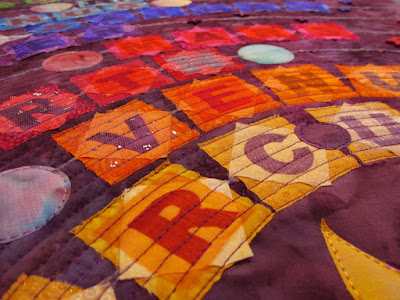 When I thought of adding some stars to the background, I'd originally thought I'd use some gold sequin-like stars that I had but when I went to get them, I found these plastic rainbow colored star-shaped buttons. I'm not sure where they came from and can't imagine having a chance to use them again in the future, so I decided to use them for this project.

More about The Persistence of Pluto

Posted by Pam Geisel Art Quilts at 2:30 PM No comments:

Email ThisBlogThis!Share to TwitterShare to FacebookShare to Pinterest
Labels: 'The Persistence of Pluto', art quilt 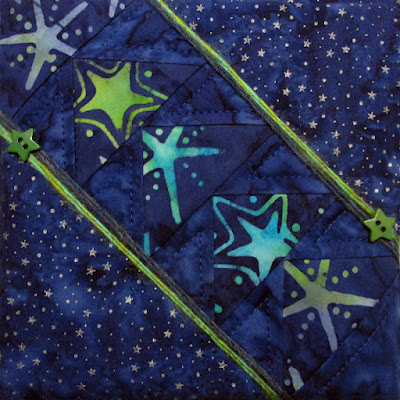 Your project must include a minimum of 5 pieced flying geese blocks.

There are exactly 5 flying geese blocks in this piece, although because the corner blocks are a very similar color to the background of the starfish fabric, the blocks aren't easy to distinguish. Also the top left block is wrapped around the corner of the canvas, so it's also somewhat hidden. 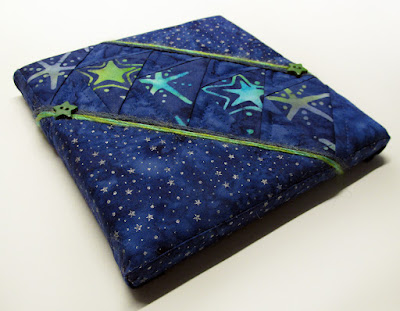 I also couched two different colors of yarn along the block edges, a gray blue and a lime green. Then I added two lime green star buttons. 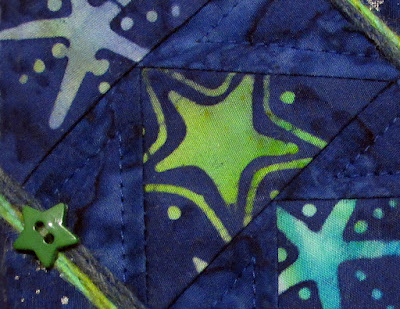 I've had the starfish fabric for several years and every time I open the batik fabric box, it would smile politely at me. I was planning something different for this piece but when I opened the fabric box this time, it called out to me so I dropped the previous fabric plans and went with this one.

To see other entries for this challenge, visit the Flying Geese page.
Posted by Pam Geisel Art Quilts at 5:01 PM 3 comments:

Ring Around the Rainbow - Project Quilting 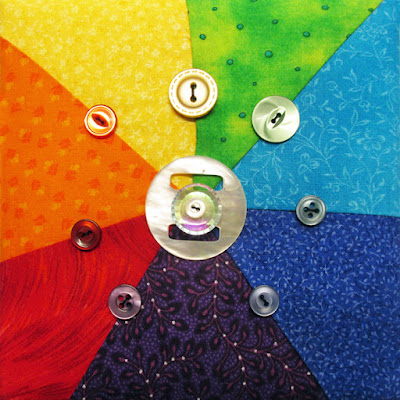 There must be something in your project intentionally repeated 3 or more times for visual effect.
For this week's project, I repeated the triangle shape seven times and the round shape (buttons) ten times (there are three buttons in the center). 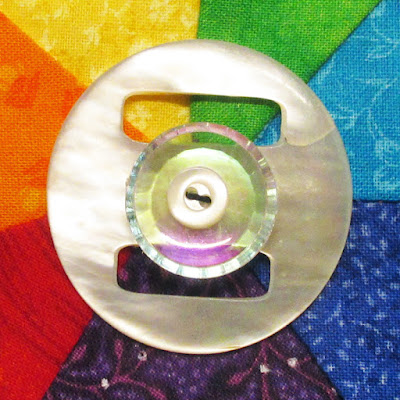 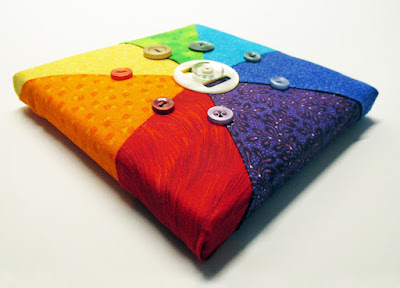 The piece is wrapped around a small canvas frame.

More about Ring Around the Rainbow

To see other entries for this challenge, visit the Rhythm and Repetition page.
Posted by Pam Geisel Art Quilts at 4:13 PM 2 comments: