Time Lapse Moon Rise, for the "Fly Me to the Moon" Exhibit Collection 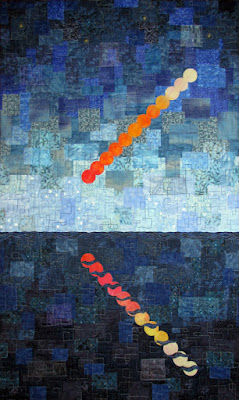 I was recently notified that my art quilt "Time Lapse Moon Rise," which I made back in August of 2015, was accepted for the "Fly Me to the Moon" art quilt exhibit. The exhibit is a celebration of the 50th anniversary of man's walk on the moon. 175 pieces were selected and will travel for through 2019. Locations are still being finalized. There is also a book being planned, but final selection hasn't been determined for that yet.

Depending on what time of day the moon rises, it will appear different colors. If it rises early in the evening, where it is still daylight, the moon can appear more red, partially because of the particles in the atmosphere. As the sky darkens it provides more contrast for the moon, so it becomes whiter. This is why the sky in my quilt blends from lighter, where the moon is lower, to darker, where the moon is higher.

I also noticed that the colors of the moon weren’t solid in the different times, but they seemed to blend into each other. The background shapes and the designs in the quilting are squares and rectangles were planned to contrast with the roundness of the moon(s). 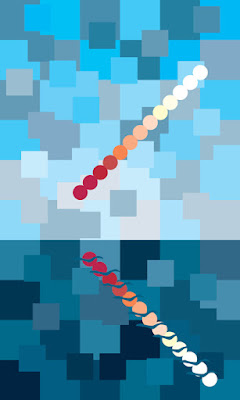 I started by playing around with layout ideas on my computer. I thought the moon rise image needed a horizontal layout but all of the quilts had to be 18" x 30" high, so I decided to add the moon rise reflecting in the water. 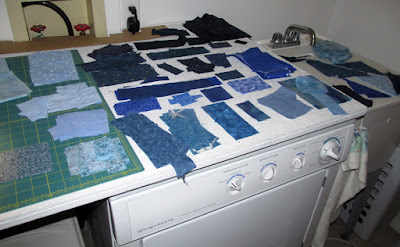 The first step was to sort my blue fabrics. I used commercial cotton fabrics for this, and I also used all of the available flat space. 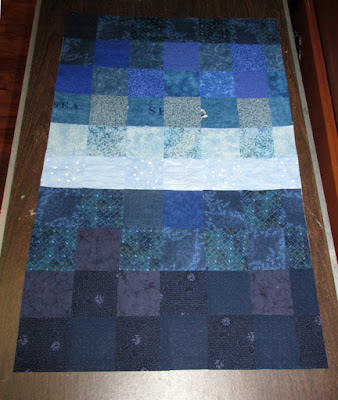 Next I cut 3.5" squares and fused them to a piece of iron-on interfacing. I didn't want the bulk of the seams or the look of pieced fabric. 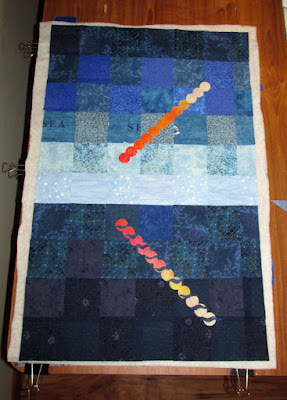 I used hand-dyed fabrics for the moons which were fused to the background. I top stitched around the moons to keep them down then fused small pieces of blue waves over the moons on the bottom part. 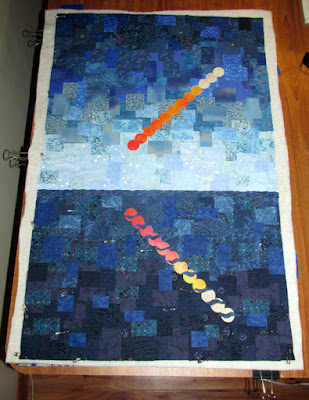 I cut many smaller blue squares in different sizes and fused them to the background so the larger blue squares aren't really recognizable as an organized layout. I basted and started quilting. 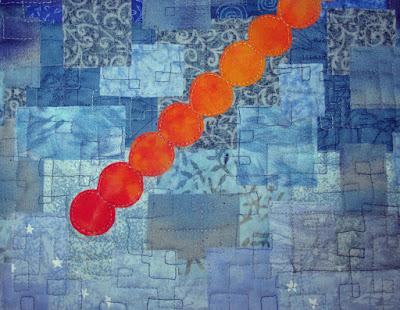 I did free motion meandering but with straight lines and squares and rectangle shapes using a blue variegated thread. 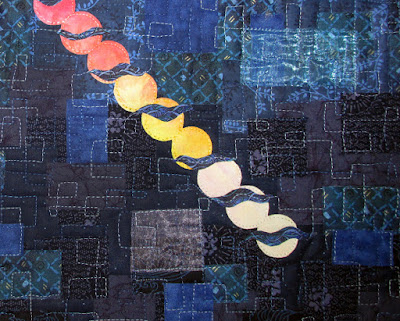 When I got to the waves I quilted wavy lines through them. Some of the blue rectangles were sheer fabrics, there is one in the upper right corner of this photo. 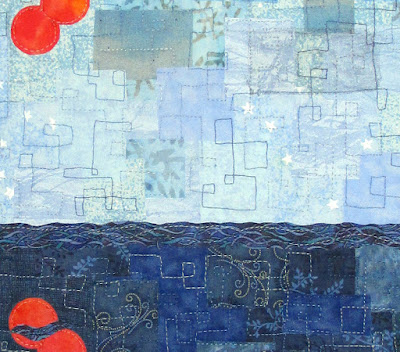 One of the last things I did was fuse a piece of fabric, the same one I used for the waves over the moons, and quilted that in place, to soften where the sky met the water. You can see another sheer fabric in the upper right corner of this photo.

You can click on any of the photos to see them larger. To read more about the exhibit and the book, click here.

Congratulations on having your quilt accepted. I loved reading about your inspiration and the way that you constructed it. Well done!

Congratulations, Pam. As always, I love reading about your design and construction processes.