The Journey of "Journey" 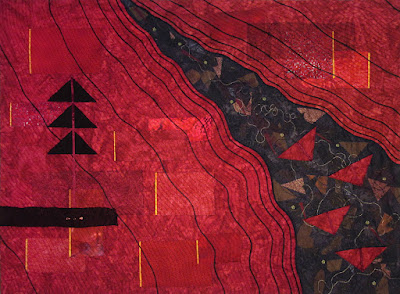 This quilt started out as a quick sketch of an area that would be created like a fabric mosaic (the black part), with lines that rippled out from it. I had the color scheme right away. I did add the triangles to the sketch, but they were a secondary thought.

The next step was to sort through my fabric and decide which ones to use. Since it was mainly just red and black, the decision was pretty easy. 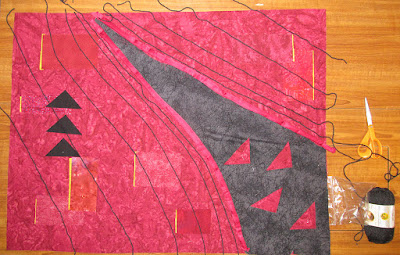 This is the fabric and yarn audition. I had a large piece of maroon fabric and I cut squares of red fabrics that were very similar in color because I wanted the viewer to have to look close to see where the fabric changed. It was at this stage that I decided to add the pop of yellow on one side of the red squares.

For the audition I used a piece of black fabric to represent the fabric mosaic. I thought I wanted to use some red satin on either side of the black but after I took this photo, I decided I didn't want to do that. I did like the way the rippling yarn was going to look. 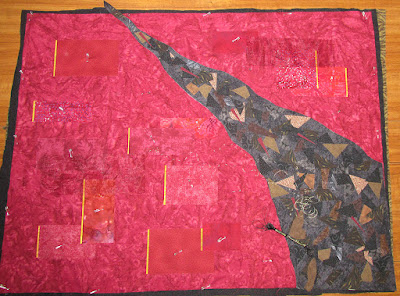 This is the piece basted. I used black batting, which shows around the edges.

Here the red squares and yellow pops were fused to the background, there are also two pieces of red sheer that are just pinned down at this point.

The black fabric had small pieces of black, brown, gray, and even very small maroon pieces on it. It does not yet have the gold thread laying on it or the tulle on top, which is the next step before sewing it down to the background. I will cover that raw edge with the black yarn. 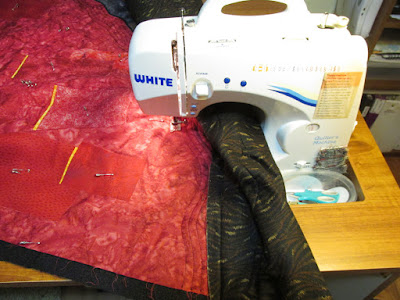 My Juki sewing machine with the very large throat area is currently out of commission, so I had to use my inexpensive back-up machine. It doesn't have a walking foot, a stitch regulator, or much in the way of free motion capabilities, and sometimes when I take my foot off of the petal, it keeps going. It was a challenge but I'm actually proud that I was able to create this quilt on this machine (although I don't really want to do it again!) 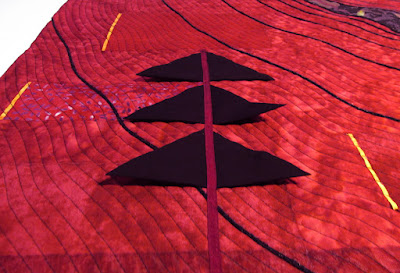 Both the black triangles and the red triangles (on the black fabric mosaic) were added last. They have a red silk ribbon going over them at the middle point and that is sewn down, but the edges aren't sewn down. There is also a piece of dark purple/brown taffeta that was positioned below these triangles and it is also only sewn down in the middle (vertically). 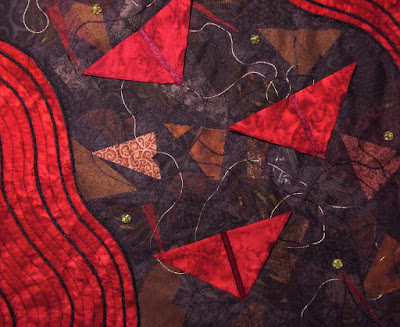 Here's a close up of the black fabric mosaic with the gold thread under the tulle. That was quilted randomly. There are a few yellow/gold glass beads hand sewn on top. There is a knife-edge binding.

As always you can click on the photos to see them larger.