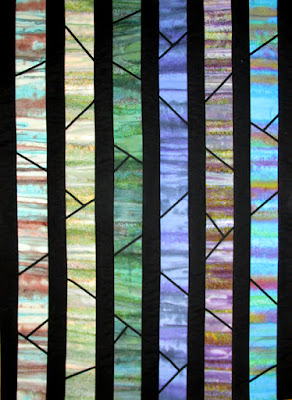 There was an additional collection that the Island Batik Ambassador's received, titled "Landscapes." With the addition of a half yard of a nice, deep, Island Batik black fabric, I made "Branches." I didn't want to use small pieces of them because I was concerned that they wouldn't have the same effect. 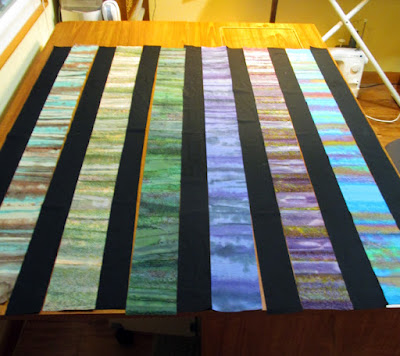 I laid the strips on my sewing table and they took up so much room I had to move my sewing machine off of it! 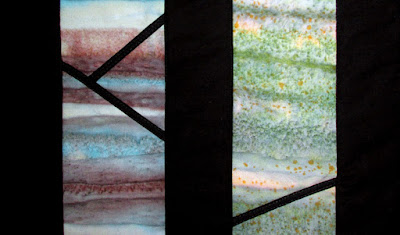 I added thin black strips at angles on top of the colored fabrics. I used some fusible bias tape to save time, then I pieced the strips and the colored pieces together. 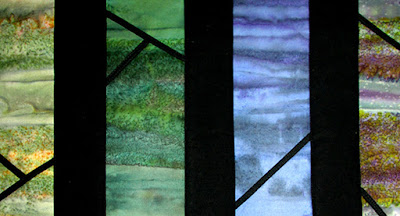 I used a black batting for the first time and the only tricky part was that it was the same color as the black fabric and sometimes hard to see where the fabric ended and the extra batting began! 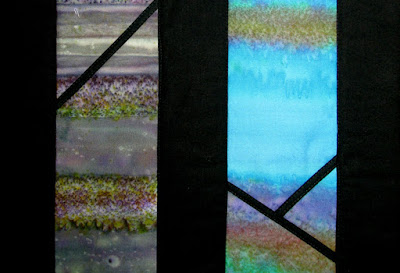 I quilted stitch-in-the-ditch with black thread along the black edges and also across the thin black strips (since they were just fused down and not exactly permanently attached). Then I added a faced binding.

I really like the contrast of the colored fabric with the black. I looks like stained glass to me.

As always, you can click on any of the photos to see them larger.

I like this. It is a great way to show off the fabrics and look gorgeous at the same time. Thanks for sharing.

Oh, I do love those landscape fabrics. What a great way to show them off. It reminds me of stained glass work!

This is a great idea to highlight the fabric with black for branches. Very cool effect!

this is very pretty. what a unique and fun idea

Great job! I like the way you allowed the fabrics to shine.

I don't know which collection I like more. My mind is so fickle. I see one and love it, then you show me another one and I like that one, and on, and on, etc. They are all so pretty!!!


Gorgeous. I love the effect. You left it so the stunning colors can be seen, but it's also not just a plain quilt. Perfect.

I love the stained glass look of your quilt! It would be beautiful to have a window or a quilt like that in my sewing room.

Wow!!! Very impressive!! I wish I had some of your talent!!

LOVE this one!! Is sooo cool! Love the stained glass look!! AWESOME!!!!

Very nice use of the fabric!!

What a way to showcase the Island Batik fabrics...just awesome.

It looks like stained glass to me too. Stunning!

I immediately thought of stained glass when I saw your photos! The batiks are striking with the black. Great contrast and awesome quilt!

What a beautiful quilt! Thanks for sharing it!

Lovely quilt! The colors are so pretty!
nikilsend(at)outlook(dot)com

Yes, I thought of stained glass narrow Windows. Very bright and I love the contrast!
reillyr2(at)hotmail(dot)com