"Depth," "Window Web," and "In Search of the Yellow Submarine" for the Seaside Summer Blog Hop! 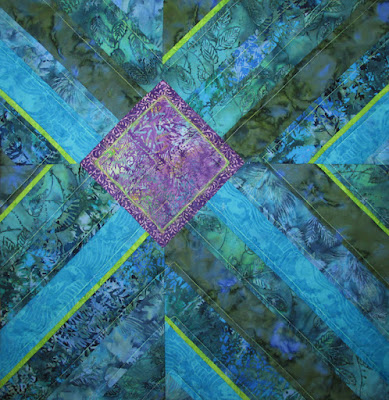 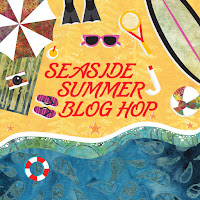 Welcome to the "Wind and Sea" collection in the Island Batik Ambassador's "Seaside Summer" Blog Hop!

We were challenged to use at least 8 of the fabrics in the collection and create a piece that was at least 24" x 24". Bonus points if it fit the theme of "Seaside Summer." (Just kidding, there aren't any points given.) 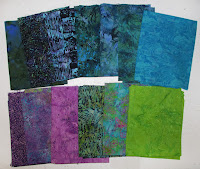 You might recognize some of these fabrics, as I used four of them for the "Eiffel Tower" I made for the "Playful Piecing" challenge back in May.

As I thought about the theme of Seaside Summer and looked at the fabrics, an image popped into my head, the way that water looks from below, or how it looks with the sunlight reflecting off the top of it. This wasn't something that I wanted to recreate literally, but I wanted to suggest that image.

I was drawn to the five blue/green fabrics and wanted to use them in long strips. I needed to include three more fabrics. I thought the lime would make a nice pop.

The next morning we went out for breakfast and I notice the images on my husband's shirt. There are pinwheels there, but what I was really drawn to was the "x" shape with the square in the middle. I could use the blue strips to make the overall "x" shape and use two other fabrics to make the center block! 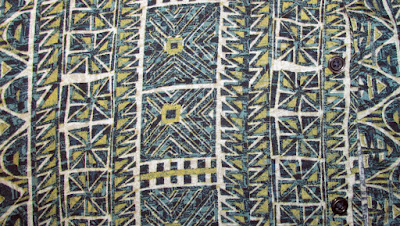 Now that I had my idea, I was ready to begin! 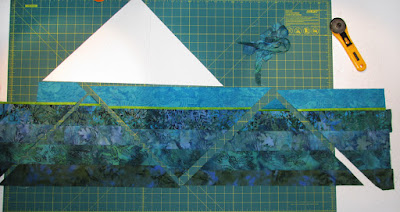 The triangle template kind of looks like a sailboat on the water, doesn't it?

I made a card stock template of my triangle then cut three triangles from each of the three sets of stripes. I like this technique for making triangles from strips but there is a bit of waste. I ended up with 9 triangles and I only needed 8 so there would be one leftover. There were also leftover half-triangle pieces from the left and right sides. (Don't worry, I didn't throw them away, keep reading.) 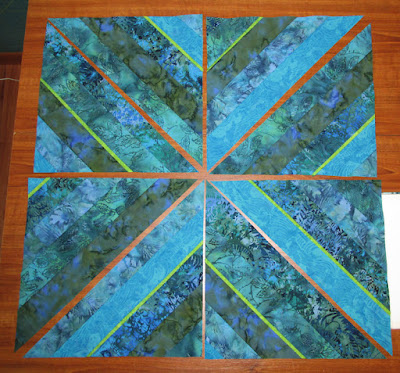 The 8 triangles waiting to be sewn together as squares. After they were sewn I trimmed 4" off the left and top sides so that the middle seam would no longer be in the center. This provided some more leftover pieces. 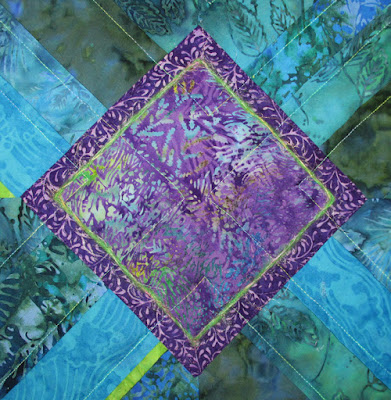 Next I sewed the dark purple borders around my purple square, folded the edges under. Unlike my inspiration image, I decided to turn it 45 degrees and lined the points up with the seams, then I machine appliqued it to the background. 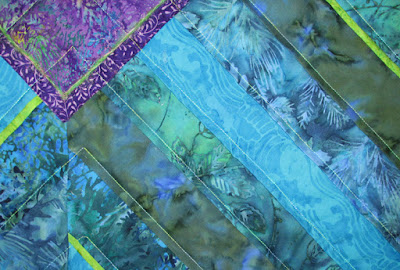 I quilted with Superior Thread’s Fantastico #5156 that is variegated green/blue/purple, quilting 1/4" outside of the seams and going into the purple diamond. I thought it needed just a little bit more, so I added some lime green yarn (I've used this yarn on a lot of projects) inside the purple diamond where the two purples meet. I did a knife-edge facing for the binding.

What about the leftover pieces?

I had one piece that was large enough to cover a 6" x 6" canvas, so in keeping with the "Seaside Summer" theme I made this little piece: 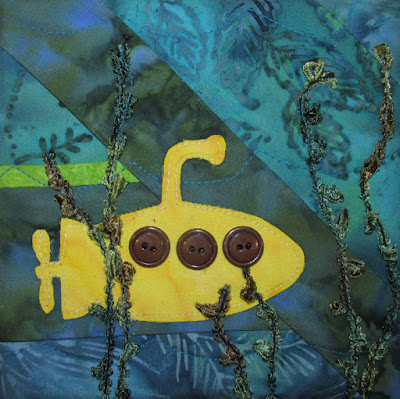 The submarine was made with the yellow fabric from the Sea Salt Sandy collection and is a fused raw-edged applique to the background. Yarn was couched (sewn on top) to create the sea plants and six brown buttons (stacked in twos) were sewn on for the porthole windows.

And I had enough long, thin pieces to make a dozen bookmarks. And one fabric card (not shown).

Then there were several smaller pieces so I just kept sewing them together until I had nine 4" squares and I used eight of them to make this piece: 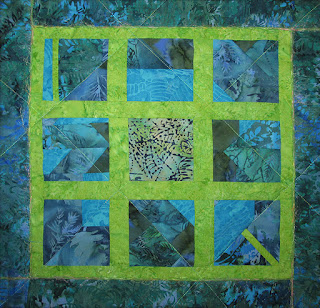 Instead of using all nine squares I arranged eight of them around another piece of fabric from the "Wind and Sea" collection. I pieced the lime green as sashing and an inner border, then used one of the original blues for a border. 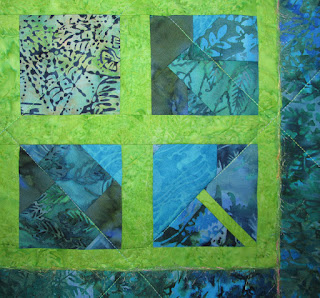 I quilted lines on a 45 degree angle creating large diamond shapes then couched more of that lime green yarn where the borders meet. Again I used a knife-edge facing for the binding. 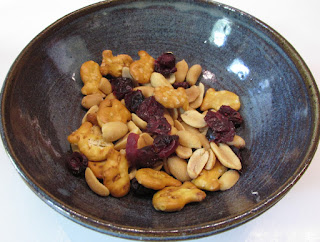 Did you know that Goldfish crackers now makes pretzels that are shaped like goldfish? That seemed like the perfect thing to have with peanuts and raisins for a seaside snack. (And you can always add some chocolate chips or M-n-Ms!)

More about Depth, Window Web, and In Search of the Yellow Submarine

What a wonderful quilt. I'm going to have to use the idea of off setting the seam.

"Depth" is a beautiful piece and that lime green is a stunning addition!

Love your work and color selections! Love that touch of lime green. akronne17@gmail.com

Pam, Depth is thought provoking. I love when scrap pieced pieces are used to create other works.

Oooooh!!! I love Depth, those batik colours are gorgeous!!!

Gorgeous work Pam! And you will have to remember to thank your hubby for the inspiration ;)

wow this fabric is lovely. oh my goodness your projects are so wonderful. i love how you just kept using up the left over pieces. so very cleaver and creative. your submarine is just too fun. I used to sing that song all the time. LOL thanks for sharing and the give a way

I love that the inspiration for Depth came from your husband's shirt! Quilter's see quilt designs everywhere. These fabrics are so pretty!

Beautiful projects. Love the colors in the collection, but every collection is great.

All of your projects are beautiful! I especially love the little yellow submarine. Thanks for sharing and for the giveaway.

Very impressive! I really loved all your projects and especially the way you came up with them. Thank you for sharing and for the giveaway.

Love the fabric, thanks for sharing and the giveaway!

Isn't it amazing where artists can find inspiration for their craft. Your quilt is lovely. That little line of green makes IT. And love how you used up all the scraps in other ways.

Great pieces! The submarine is so cute. The couching adds a great touch, too. I can't believe you got so much out of the extras! Great job.

Love the feel of these colors-so calming.

Beautiful fabrics, and your quilt is lovely!

Your project is very thought invoking. I kept trying to "see" what I could sea. Lol Lovely. raydeer@memlane.com

What fun you had playing with that gorgeous fabric..your pieces turned out great. Thanks for sharing the giveaway!

I like "In Search of the Yellow Submarine". 24Tangent@gmail.com

pam, I just love this quilt, the submarine was a pretty cool idea. Snack looks super yummy too :)

I visited every Facebook page, but counter still says I have 0/20 entries

I love how you went from a pattern on a shirt to a gorgeous quilt!

Love those colors together!

Love this fabric and your quilt is very pretty.... happyness04431@yahoo.com

What a beautiful (and fun!) post! I love how you kept making things with progressively smaller amounts of fabric!

Wow! You know how to use fabric, every single bit of lovely fabric! I'm not usually a fan of greens, but this batik green with the blues is so pretty. I especially love the canvas project with the submarine and couching seaweed. You are an inspiration!

Love the blues in your quilt and everything you created. The yellow submarine is really cute!

Depth is brilliant, I love the skinny green stripes. I think it would look great in black and white too, with just those tiny bits of colour.
jen dot barnard at btinternet dot com

Who could bear not to use every bit of batik fabric? You did great. And just beautiful colors!
What's a snack without chocolate? (Yeah, I know, it melts during summer!)
reillyr2(at)hotmail(dot)com

"In Search of the Yellow Submarine" is just so cute. I just love it!
nikilsend(at)outlook(dot)com

I really like all the colors. So beautiful together. Very nice.

I love the way you used these fabrics, yours quilts are beautiful. I love the little hidden yellow submarine!
fredbisimail at gmail dot com

The bright accent color really makes that color pop! Very nice job on pulling inspiration from an unexpected source. And an 'easter egg' in the yellow submarine...nice!

What an inspiration....you know you are a quilter when you do find inspiration in your husband shirt. I find it everywhere. Wonderful fabrics.

I love the colors in this bundle and the quilt you made with it is awesome! Thanks!

Please click on the delaineelliott above for my email link.

Wonderful fabrics and love how you used them!

thank you for chance to win your Give-a-way too! :D

Love the submarine. Thank you for sharing your process.

Love this fabric and how your used the pop of lime green.

I love the yellow submarine mini quilt ;)
Thanks for sharing!

I love your fabric choices and selections! This pattern is perfect for these beautiful fabrics. Cute submarine too!

Love these fabrics and the mini quilt

Beautiful quilt and I love the submarine!

Is it too late to enter the giveaway? I hope not... I love your quilt!!

So pretty..the lime green gives it such a spark....the yellow submarine is a neat accent, would be fun as a pillow with the quilt.

So pretty..the lime green gives it such a spark....the yellow submarine is a neat accent, would be fun as a pillow with the quilt.