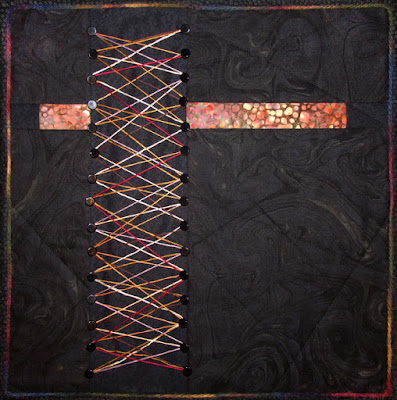 Challenge recap for  "All About That Thread":

In honor of one of Project Quilting's long term sponsors, Aurifil, the inspiration for this week's challenge is THREAD.
Thread is obviously important for quilting. You use it for piecing and appliqueing a quilt top. You use it for the quilting. Plus adding the binding, sleeves and labels. Other than the quilting, it's usually not even visible.
I had a ton of ideas for making a quilt that features thread:
Wednesday evening I finally decided that I wanted to do something like the thread art, but using buttons with a shank (instead of holes on top) and wrapping thread around them. In order to do this, I needed some buttons so as I was driving to the store, the whole layout popped into my head.

The store only had 3 packs of cardigan buttons so I bought all three. Having a total of 30 buttons meant I could have 15 buttons on each side. If each button is 1" apart and we allow for room at the top and bottom, my piece would be 16" x 16". 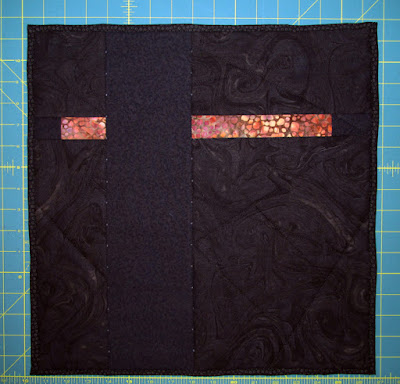 I found a lovely piece of black marbled fabric and another that was a black on black tone and pieced them along with a multi-colored batik strip. I didn't want the batik strip going all the way to the edges so I pieced some black fabric on either side of it.

I made the quilt sandwich using some black batting. I haven't used it before and sometimes found I wasn't sure where the edge of the quilt top was when I was quilting. I quilted some random lines on angles.

I bound the quilt then used a white colored pencil to mark where the buttons will go, then added the buttons. 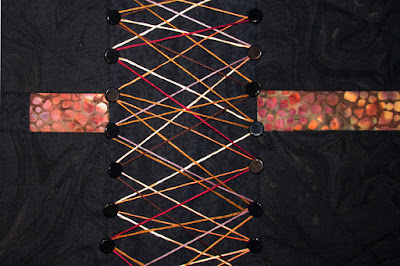 Instead of thread I used embroider floss in the colors of the batik strip. Instead of wrapping the thread around the buttons, I threaded the floss and went through the hole in the button shanks. 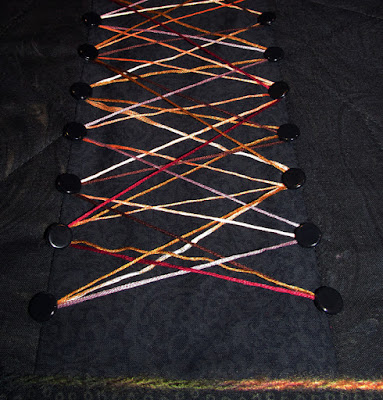 Unlike the thread art with the nails in the wood, this wasn't stiff. After I was finished I cut open the backing behind the thread and added a piece of thick fusible interfacing. If I did this again, I'd add that part during the sandwiching process.

The last thing I did was couch a piece of variegated yarn just inside the binding.

To see other entries for this challenge, visit the All About That Thread link up.
Posted by Pam Geisel - For Quilts Sake at 11:17 AM

I love your original interpretation and design for the Thread theme! Sew clever and beautiful!!! Thanks for sharing your process!

We were in the same mind set. I instantly though of string art, too. Your concept is excellent and the button idea so creative. Great art piece.

What a GREAT idea! Very unique!

Great instructions for how you did this. It is very dramatic with the colors you chose. I like this a lot.