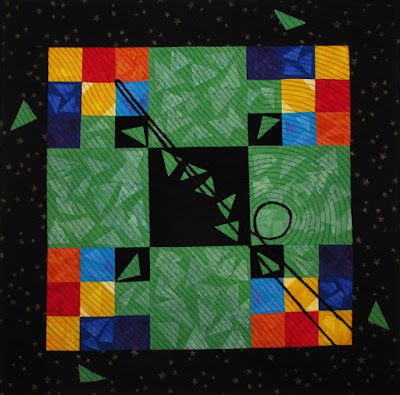 This is my sixth entry in the Project Quilting "Focus Through the Prism" challenge. To play along you need to purchase a ROYGBIV hand-dyed bundle of fabric from Cherrywood Fabrics and then at the beginning of the month a traditional quilting block is selected. Participants get to chose which of the seven focus fabrics they want to emphasize for the month, but other fabrics can be added.

All quilts will be made 20" x 20" with the intention of displaying them together in the future. 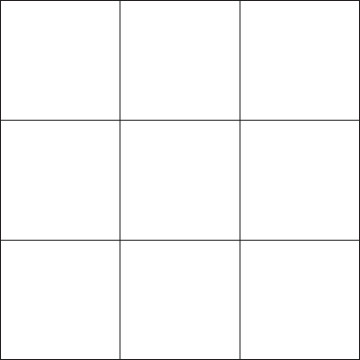 I wanted my design to be similar to the other quilts I've made for the Focus Through the Prism challenges: "Monkey Tail",  "A Second Self", "Cabin Sweet Cabin", "Positively Pinwheels!" and "Chasing Geese."

You might notice that the general layout for all of the ones I've done for this series are a Nine Patch block with the center block being black. For this challenge it was a matter of deciding whether to make the eight outside blocks all Nine Patches or just some of them. I decided to just do the four corners, so the Nine Patch would be more obvious, and it would give me larger areas for my focal color of green.

All that was left were three decisions to make: what colors to put where within the Nine Patch blocks, what to do with the yarn shape, and what to name it.

I played around with several different color combinations within the four Nine Patch blocks, but nothing really stood out, so I decided to move on to the "What to name it" question. I thought about phrases with the word "Nine" in them and when I thought of the pool game "Nine Ball" I realized that my focal color was green, the same color as the cloth on a pool table. 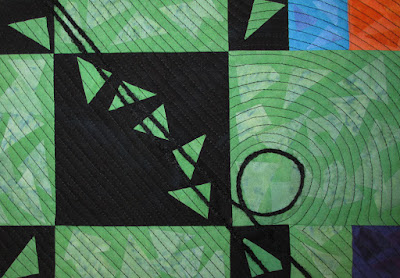 I did some research to find out what colors the balls are for the game Nine Ball and decided that would be the colors I'd use in my Nine Patches. I did have to make one small change, the 7 ball is usually burgundy and not only did I not want to introduce a new color at this point, I wanted to use all of the colors from the Focus Through the Prism set so I used my artistic license and changed it to the only color not represented, the blue color (I used the indigo for the blue ball).

There are a few places that this quilt deviates from the others in the series. It's the only one that represents something else instead of just being abstract. It's the only one with black outside of the center square and borders, but I didn't want it too far out so they are the squares that touches the center black square. And it's the only one with a significantly lighter color. In order to make the striped 9 ball (in the center of the Nine Patches), instead of using white, because I thought it would stand out too much, I used a lighter yellow. It's subtle. 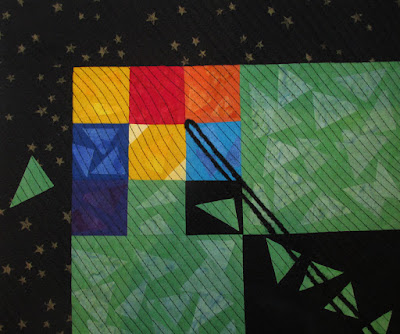 I pieced four Nine Patch blocks, which was a little tricky because the final blocks were 5" finished size, so the smaller squares are 1.667" which is not a measurement on my ruler. I estimated between the lines and it came out just about right. I pieced the Nine Patch blocks with the green squares then pieced them together around by 5" black center. I fused fabric in similar colors on top of the pieced fabrics and I used the same border fabric and couched a piece of black yarn, this time representing a pool cue and pool ball. Then I quilted black quilting lines that echoed the yarn at 1/4" apart.

I used a knife-edge facing to bind the quilt.

More about Nine Ball and my Focus Through the Prism series

To see other entries for this challenge, visit the Nine Patch link up.
Posted by Pam Geisel - For Quilts Sake at 7:58 PM