Fireflies Art Quilt - it glows in the dark! 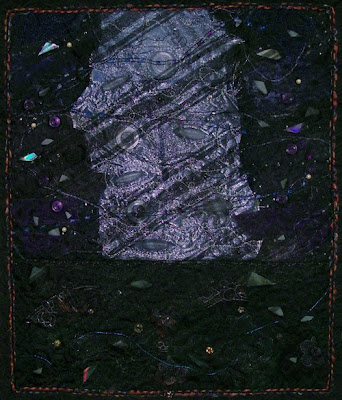 
This art quilt was made for the 19th Annual Open Members' Show at the Dayton Visual Arts Center. The theme this year was "Darkness."

One of my favorite things about living in south west Ohio is that we are on the western edge of the Eastern Time Zone, so it says light in the summer until almost 9:30 pm. And when it finally does get dark, the lightning bugs come out. Did you know there are some places in the country where they don't have lighting bugs?

The best place to see lightning bugs is in an open field where there are trees at the edges. The bugs like the field, and with the dark trees behind them, they are easier to see. So for my "Darkness" quilt I wanted to have a lighter area in the center for the field, and darker areas at the edges for the trees.

I started with some black fabric, added some shiny silver fabric in the middle, then added some pieces of dark blue and purple fabrics on the left and the right of the silver fabric and dark green across the bottom. I added many embellishments, then placed some black sheer over the top of the items then quilted it all down, being careful to quilt around the embellishments, which trapped them in the fabric.

After adding the binding, I couched some yarn where the binding met the quilt to add a little bit of color and frame the quilt. Here is a close-up photo: 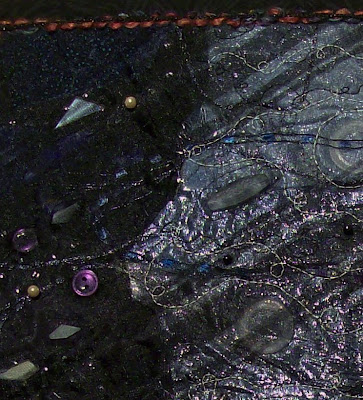 Some of the embellishments I used were buttons, beads, and colorful threads. I also added some parts of glow-in-the-dark stars and some pieces of a broken CD. And while those pieces don't blink like lightning bugs, the CD pieces will catch the light and "wink" as you walk by the quilt.

I even used glow-in-the-dark thread, although it doesn't stand out very much. Below is a photo of the glow-in-the-dark parts, you can see the faint image of the quilting looping in the middle. This wasn't an easy photo to get! 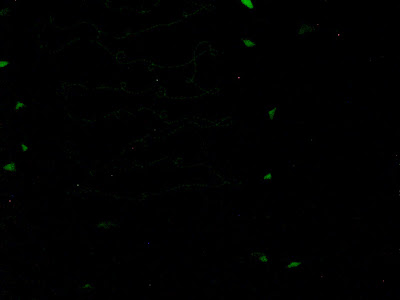 I love this one Pam!! Awesome concept and it came out so well.