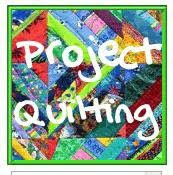 Several of my on-line quilting friends really like watching the show "Project Runway," and one of them, Kim, has started a quilt challenge called "Project Quilting." She posts the requirements for a challenge on Sunday at noon and the projects are due the following Sunday at noon, then she posts the entries so that people can vote on their favorite, and she's also enlisted the help of some official judges who also vote and offer comments. Prizes are awarded to the judge's first choice, to the winner of the public's choice, and a randomly-drawn participant who posts a comment will also win something.

One of the things that I love about challenge projects is that it can sometimes force an artist to be more creative than they might otherwise be, especially when it comes to limitations. At one of my first graphic design jobs, back when desktop publishing was just becoming popular, I had a computer with TWO fonts. I had Helvetica and Times. This challenge made me work harder to use those two fonts in creative ways that I probably wouldn't have, if I'd had more fonts to choose from.

The Project Quilting challenges are created by Kim's mother-in-law Diane. There have been several projects so far and I'm very impressed with the challenges that she designs and the variety she includes. One was to use a certain quilt square, another was to cut a certain number of strips of fabric and use those, once she had a limit of how much you could spend which made the participants use fabric from their stashes. The current one is to use fabric that had a previous life as another object (like the wall hanging I made out of ties). To read more about the general concept of Project Quilting, click here.

To make it more like Project Runway, Kim decided that she'll run an eight-week season and add up the scores so there is one winner of the complete season. Two of this season's challenges have already passed, the third challenge for the season started yesterday, and the last challenge of this season will be on Aug. 22.

As much as I love the whole concept of this, I just don't have the time to make the challenge quilts right now. Kim recently posted a request for judges, and I decided that I did have enough time to judge the entries and offer comments to the quilters. I did my first judging duties last week for the "Road Trip" challenge. I did have an idea for this challenge, and maybe sometime in the future, I'll make one following the challenge guidelines.

If you want to join in, you can "Follow" Kim's blog so you'll get reminders about when the challenges are due and when you can vote. There's also a Facebook Fanpage.
Posted by Pam Geisel - For Quilts Sake at 5:05 PM

what a fun idea! I wish I had the kind of time to organize, or take place in this sort of thing (but not for quilting, as I can hardly sew a stitch).