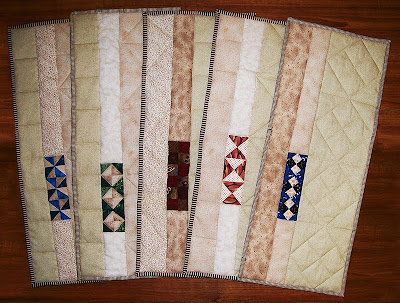 I made this set of 5 table runners for a group of 5 women who are friends of the family. I wanted to use mostly neutral colors (light browns) as it is sometimes hard to predict which rooms people will use table runners in and what colors would be best for those rooms, but I also wanted to include a pop of color so the table runners wouldn't be just beige.

I wanted to explore the idea of traditional quilt patterns versus contemporary uses. Around this time I was looking through my February 2010 "American Patchwork & Quilting" magazine and found "Tiny Dishes" by Virginia Cole of Galloping Pony Studio. Virginia, who likes to make miniature quilts, had a pattern which had small, colored, traditional mini quilt squares arranged in a contemporary layout. My sizes worked out a little different that the ones in the magazine, and I decided to use a different square in each runner and to have the quilting lines (on the right side) be the same quilt pattern as the mini square. 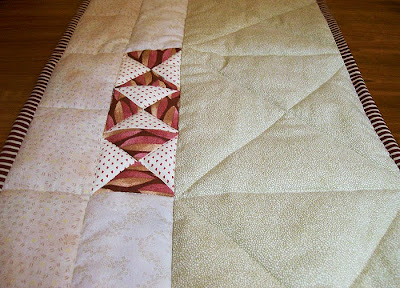 I really liked how the striped binding sets it all off. If I have a solid colored binding I will sometimes sew it on with the sewing machine but since the stripes aren't a solid color, I sewed the binding on by hand.

I wanted all 5 table runners to be similar but not exact copies so I used 2 different striped fabric for the bindings and 5 different light browns for the background (3 on each). And with the exception of one of the striped binding fabrics, I was able to use fabric that was already in my stash.
Posted by Pam Geisel - For Quilts Sake at 11:25 AM

I love it when I can use fabric from my stash. I saw this pattern too, and yours look great!