December just flew by in a blur. I was fortunate to be busy with some custom orders including these 5 table runners using vintage Christmas handkerchiefs that belonged to my customer's family members. She had 13 of them and she also provided the other Christmas fabric and decided which handkerchiefs she wanted grouped together. She also wanted the quilting to be subtle so I used white thread.

All handkerchiefs and borders were stitched-in-the-ditch with some seasonal quilting where there was room for it. All of the handkerchiefs were stabilized by using fusible webbing to adhere them to a white cotton fabric.

This one is called "Santa's Sleigh" and is the largest at 18" x 45". It has 3 printed handkerchiefs that were almost all the same size and each one had a decorative scalopped edge which I left showing and carefully quilted just inside the borders. 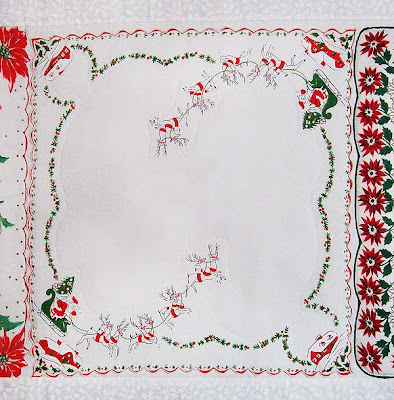 The details of Santa's reindeer, the holly berry border and the houses was just exquisite and I used these elements to quilt around.

This table runner, "Poinsettias" also featured three handkerchiefs although these were embroidered. The middle and left have poinsettias and the right shows a candle with holly leaves. The inner border of green offsets the white handkerchiefs and the white borders which has gold swirls printed on it. 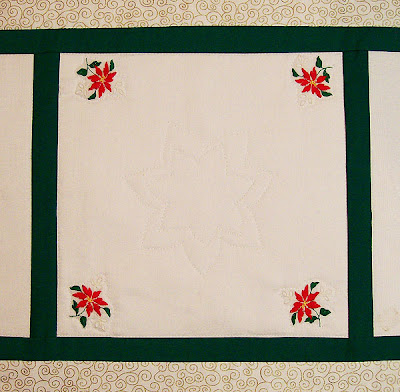 Again really hard to see but there is a white poinsettia quilted in the middle of each of the handkerchiefs.
--- 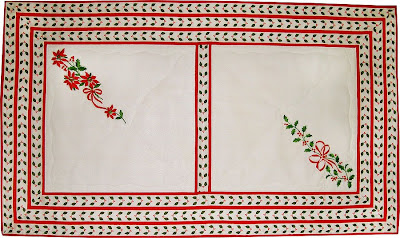 The "Holly" table runner has holly in the borders and the sashing. Since the fabric is linear on it, I mitered the corners to keep the lines going around the quilt. 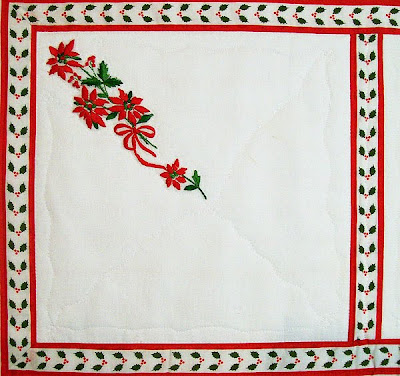 The handkerchiefs on this quilt are embroidered and more detailed than the poinsettias above.
--- 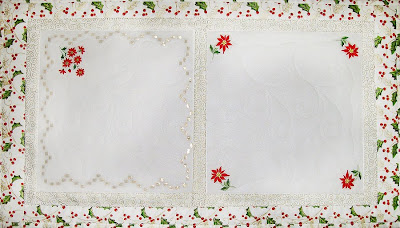 In "Golden Swirls" the handkerchief on the left had some gold metallic threads around the outside. There is a thin inner border and sashing that has gold swirl printed on it (also used in the "Poinsettias" table runner). The border fabric has holly berries and some more gold in it. 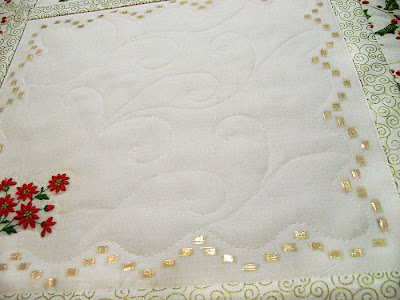 The holly berry fabric was also used for the backing of this quilt and when I quilted it I had the back part facing up and used the gold swirls to define where the quilting lines would go.
--- 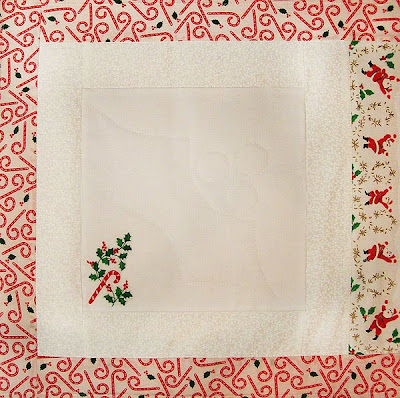 The handkerchiefs with the candy canes embroidered on them weren't as large as the one in the middle with the printed Santas so they have a white sashing to make them the same size. And it's a little hard to see with the white on white quilting but there's a large holly berry quilted on the candy cane handkerchiefs.
Posted by Pam Geisel - For Quilts Sake at 6:50 PM

tHESE TURNED OUT REALLY WELL. I bet your customer was thrilled! Happy New Year!

Cool, Pam, what fun execution of a great idea! I'm sure the family of your client loved seeing these family heirlooms reused in way they can more easily display.

I do love these and have given one to each of our kids. People have enjoyed seeing them in our home around the holidays!