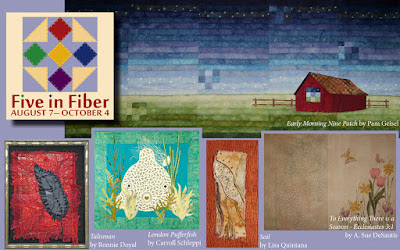 I’ll have several of my art quilts an exhibit with four other members of the Miami Valley Art Quilt Network (hence the title “Five in Fiber”) at the Troy-Hayner Cultural Center in Troy.

If you've ever exhibited in a popular location, you might know that it can take awhile to get an exhibition scheduled and to create pieces for it. The story for this exhibit starts more than 2-1/2 years ago.

Back in 2013, fellow MVAQN member and quilt blogger Lisa Quintana sent out an e-mail to all the group's members saying she was going to put together a proposal to exhibit at the center and asked anyone who was interested to send her photos of three quilts, an artist statement, and a resume or CV. She wanted it to be an exhibit of newer works.

Four of us responded. With Lisa being the fifth, she titled the exhibit "Five in Fiber." A few weeks later she e-mailed the rest of us that the chemo treatments for her recurrence of breast cancer weren't working, and that she might not be alive when the show finally happened. In June we found out the proposal was accepted and that the show would be in Oct. 2015.

Here we are, two years later and it's "Five in Fiber" although one of us will only be there in spirit as we are including her quilts posthumously. As per Lisa's wish, we've all created new works for this exhibit. Most of the quilts I'm exhibiting were made in the last two years.

If you’ve never been to the Troy-Hayner center, it’s worth a visit just to see the inside of this beautiful building, which used to be Mrs. Hayner’s home. While you’re there you can check out the giant Abraham Lincoln one block southeast.
Posted by Pam Geisel - For Quilts Sake at 9:42 AM

How wonderful that the four of you have continued her vision and are including your friend for this exhibit ... Good luck to you!