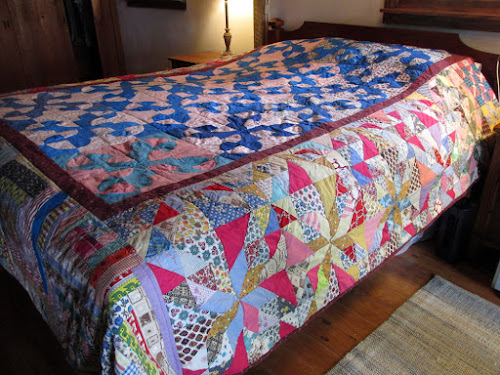 Bed quilt made from vintage quilt tops, 92" x 100"
A friend contacted me because she had several quilt tops and orphan blocks made by her maternal grandmother but they'd never been made into quilts and she wondered if I could finish them for her. Most of them were hand pieced and I let her know that I could finish them but I'd wouldn't be hand quilting them and she was fine with that. She only have a few requests, she wanted some of them put together to make a bed quilt and there was one that already had borders on it that she wanted as a throw quilt. She'd like a few of the others to also be throw quilts but would also like some pillows and table runners, whatever I thought was best.
The bed quilt (above) was made with two throw-size tops and some orphan blocks. The center is "Drunkards Path" which is an interesting quilt block because it has curves in it, which is more difficult to make. I included a thin border around it on three sides using the same maroon fabric that I used for the back and binding, to provide a visual break between the different patchwork patterns and to tie it all together. I created this using a quilt-as-you-go method so I didn't have to work with the whole bulk at one time and after quilting this part I added the sides and then the bottom.
The sides are made from a "Hunter's Star (variation)" that I cut in half. (My friend was totally OK with me cutting up any of these vintage tops). I considered using it for the center but some of the triangles had bias edges which had stretched some over the years and I was concerned about things lining up. Both this piece and the "Drunkards Path" were hand pieced so I fused innerfacing to the back of them to add some strength to the vintage fabrics and also keep them from stretching when I quilted them.
Across the bottom I pieced together some "Liberated Log Cabin" blocks that had been finished but never assembled together. These were originally machine pieced on foundation blocks so I didn't feel the need to fuse any innerfacing to them.
= = = 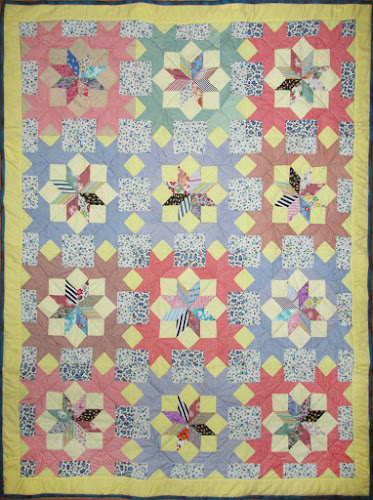 Stars and Cubes, 58" x 74"
This vintage quilt top was the only one to have a border on it and it seemed that the outside edges of the border were all selvage edges, which was nice because there wasn't any fraying along the edges. I fused innerfacing to the back of the quilt top, added batting and a backing fabric, and quilt it with large "x" shapes through the blocks. 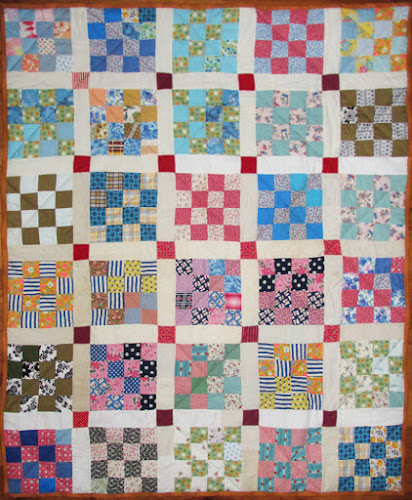 Checkerboard, 46" x 55"
There was actually a little more to this as I think it was supposed to be bigger. There was a row of sashing (the white rectangles with the red squares that are between the blocks) along the bottom of this piece. There were also some checkerboard blocks in with the orphan blocks but not enough to finish a row, and these orphan blocks came in handy for patching some of the other pieces. So I removed the extra sashing, fused innerfacing to the back of the quilt top, added batting and a backing fabric, and quilt it with large "x" shapes through the blocks. 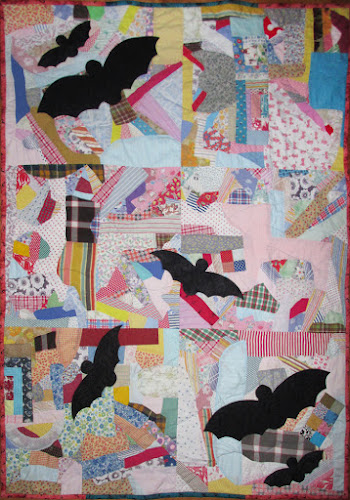 Bats on a Crazy Quilt, 54" x 75"
This piece had random shapes hand pieced on top of six foundation fabrics that were then sewn together. While the foundation fabric looked like a backing, the raw seams from where the six pieces were sewn together were visible. There was also a binding hand sewn to it and several of the pieces were either ripped or worn away, which makes me think this one was used as a summer quilt.
My friend's original thought was for me to use some of the other orphan blocks as patches, and I did do that in five spots. I know my friend likes bats so I added six fused, raw-edge bat appliques using three different fabrics so if more bats need to be added it the future, the fabric won't have to match. All of the bats were strategically arranged to cover holes or fabric that had worn away. 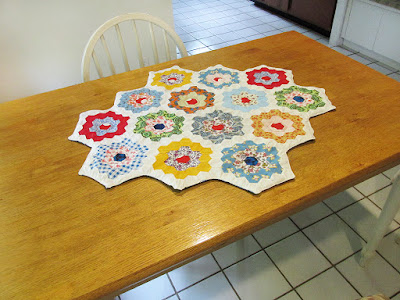 Grandmother's Flower Garden table topper, 29" x 26"
As someone who has never made anything with hexigons, I considered this to be one of the treasures of this collection. This was also supposed to be larger as there was another hexigon attached but I saw that if I removed it, it would make a balanced shape that could be used as a table topper. I used a pillowcase method of attaching the backing fabric and binding then did a little machine quilting around the center hexigons. 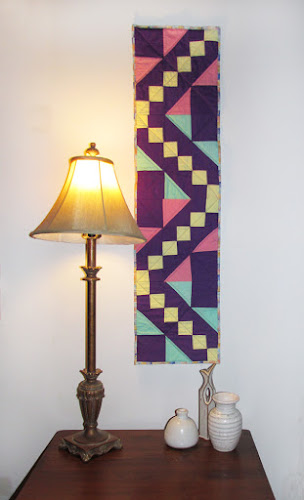 Road to the White House, 38" x 10"
This piece started as four orphan blocks. They didn't seem to match any of the other pieces so I sewed them together and made this wall hanging that could also be a table runner. 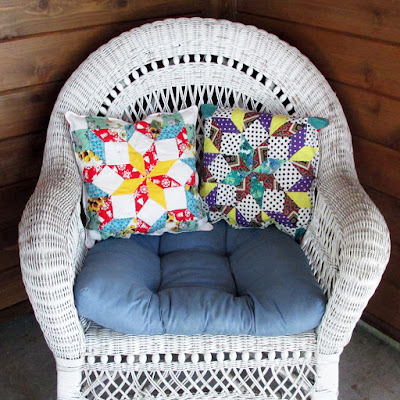 Vintage quilt block pillows, 14" x 14"
There were eight orphan blocks, four of them with the same "Carpenter's Wheel" design so I made these into pillows.

(L-R) Carpenter's Wheel, Good Cheer (variation), Rolling Star, Crazy Quilt
Working with vintage quilt tops is a little tricky as over time some fabrics can fray or disintegrate all together. For any that are just one layer of fabric, it helps to fuse innerfacing to the back and if cutting one apart to be aware that the recently cut edges on a hand-pieced top might unstitch themselves without the knot there to hold them closed.
They are likely more fragile than a new quilt so you'll want to not tug on the fabrics and wash them as infrequently as possible, using a gentle cycle and air drying, if possible.
Posted by Pam Geisel Art Quilts at 3:40 PM