Only On the Surface 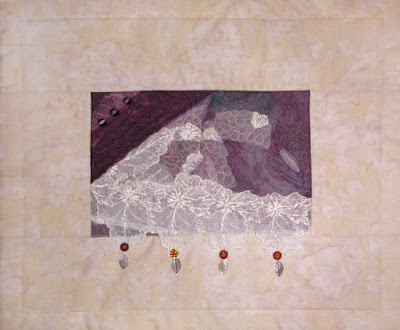 I belong to a Textile Art Group and for the last seven years we've had a biennial exhibit at the Winds Cafe in Yellow Springs. In 2013, 2015, and 2017 there were five of us who participated (not always the same five, but I've participated every time). This year we have nine fiber artists participating in the show which will be up through Nov. 3, 2019. 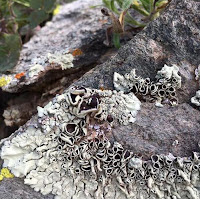 Since our last show, one of our members, Corrine, moved to Arizona. Bette was concerned that Corrine wouldn't be able to participate in this year's show so Bette selected a photo of lichen on a rock that Corrine had taken and posted on Facebook.

(Corrine did send us two pieces for the show.)

Bette was drawn to this photo because to her the lichen looked like it was made of fiber. So she challenged the rest of us to create a fiber piece inspired by the photo.

This is my piece. I immediately saw the lichen as lace (as did Bette) and I knew I wanted to use layered sheer fabric to build up the background. It wasn't until I started working on it that I realized how much purple was in the photo. 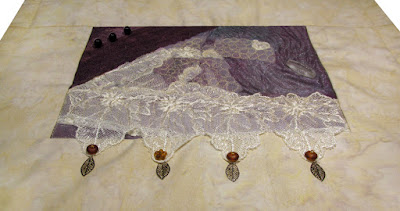 I started with piece of purple cotton fabric and I added some purple, green, and white sheer fabrics in layers to create the dark and light areas. I added the lace at the bottom then free motion quilted round shapes to hold it all down. 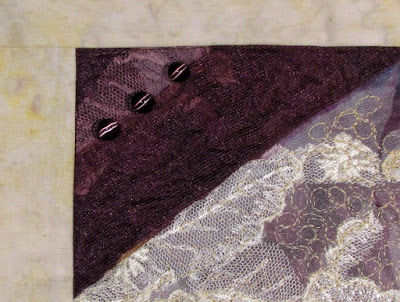 I added the large cream colored fabric border to act as a mat and let the lace hang over at the bottom. 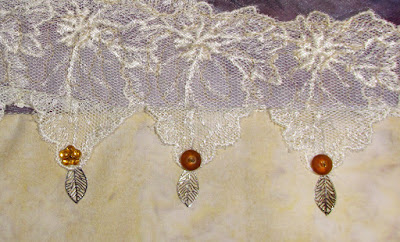 I attached some gold glass beads and delicate silver leaf beads at the bottom, three brownish purple beads in the upper left corner, and one long, thin frosted glass bead on the right side.

The title is taken from the Joe Walsh song "The Confessor." I've always liked these lyrics:

If you look at your reflection at the bottom of the well
What you see is only on the surface
When you try to see the meaning, hidden underneath
The measure of the depth can be deceiving
The bottom has a rocky reputation


More about Only On the Surface.

Email ThisBlogThis!Share to TwitterShare to FacebookShare to Pinterest
Labels: 'Only On the Surface', art quilt