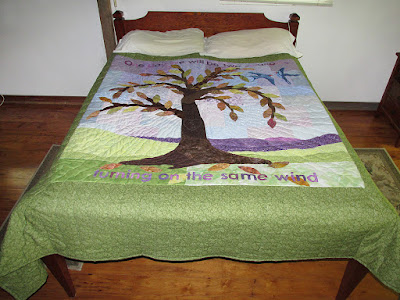 Yes, it's been over a month since my last post, but here's a long one with a lot of photos to make up for it. I spent the last several weeks working on a custom, two-sided art quilt for the bed.

Day 1 : The design has been approved. I created it using the computer program InDesign so now I print it out. I have to print it tiled onto 30 pages, trim the edges, then tape it together. 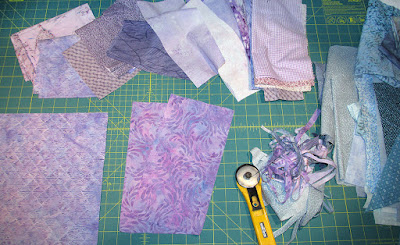 Day 2 : Went through my stash and selected the fabrics to use for the sky background. If you asked me yesterday about my fabric stash, I would have told you that I had a lot of blue but not a lot of purple. Today it is obvious that when it comes to lighter shades that I have a lot more light purple than I do light blue (although I won’t when I’m done with this quilt!) I used commercial cottons, hand dyes, and batiks including some of the Island Batiks. I used almost most of the yard of light purple from the Sweet Pea collection.

I cut the fabric, 44 squares that are 10.5”x10.5 and 20 pieces that are 10.5”x5.5” and I arranged them from light to dark and getting slightly darker on the ends of the rows. I had to set up two six foot folding tables in my annex room to lay it out on. Sometimes I am surprised at how long it can take just to select and cut the fabrics for a quilt. 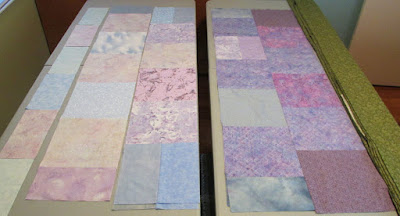 Day 3 : Sewed the sky background fabric into rows then sewed them together. I planned it so the rows are off-set instead of making a checkerboard pattern to avoid the seam bulk and to make it seem more random. Lots of walking back and forth from the layout tables in the annex room to the sewing table. It took less time to sew them than it did to cut them. The green fabric on the right is the border fabric, so all other fabirc has to complement it. 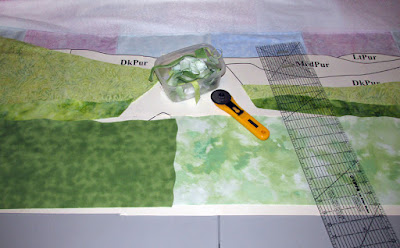 Day 4 : Cut the pieces for the green grass and purple mountains under the tree. Fuse them to a piece of fusible innerfacing that is on top of my printed paper. Top stitch the raw edges in place. Again the cutting and placing took longer than the sewing. 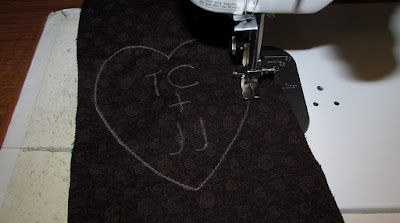 Day 5 : I traced and cut the templates for the different parts of the tree, then I used these to cut out the tree pieces. Since this will be a two-sided quilt and I designed it so the tree and background are reversed on the back side, I was able to cut the pieces for both sides the same way that sewers cut fabric for clothing by folding the fabric in two and cutting through two layers. This way one piece is right side up (for the top) and the other is reversed (of course it doesn’t matter with batik fabrics since both sides are the same).

The customer wanted a heart with initials “carved” on the tree. I don’t have a sewing machine that does embroidery (as I don’t do embroidery) but I choose a simple font and figured I’d just do a straight stitch over the heart and initial going over each line three times. I thought this would be easier to do on the single piece of fabric instead of after it’s put together. 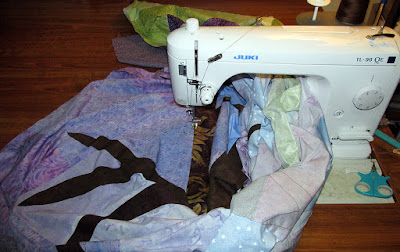 Sometimes I wait and do this during the quilting process but since this piece will be two sided (and despite my best efforts there is no way I can get the trees to line up in the same place on the front and the back) and since it is pretty large, I’ve decided to sew down all my raw edges before quilting. As much as I like working with fusibles, I haven’t found any yet that are truly permanent. 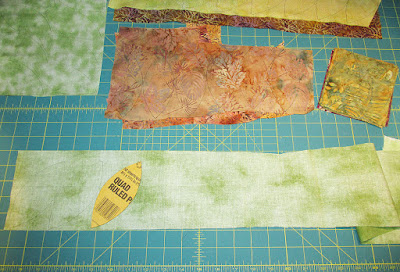 Day 7 : I cut out a leaf shape from cardboard then used it to trace the leaf shape on to the back of my leaf fabrics. Again I fused Misty Fuse to the backs side of the fabrics then cut the pieces out. I had planned on using scissors but realized it would be quicker with the rotary cutter and because the leaves were a simple shape, this was possible to do with the rotary cutter.

I used green fabrics for the Spring/Summer side and oranges, yellows, and browns for the Fall/Winter. Some of the leaves that look brown from afar are actually yellow with purple and orange with purple. 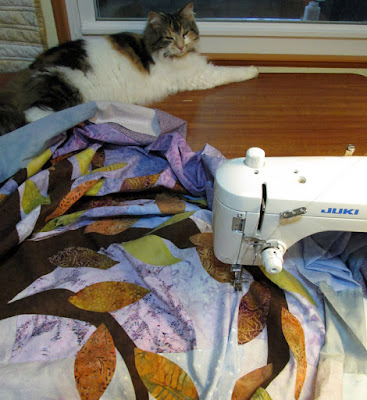 Day 8 : I sewed the raw edges down on the 113 leaves, using thread as close to the fabric color as possible. I also had a surprise visit from quality control who supervised today's sewing. 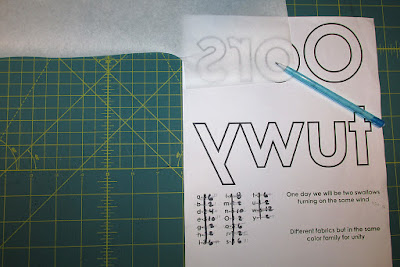 Day 9 : Traced the 90 letters (in reverse) on WonderUnder (fusible that has paper on one side for tracing). I fused the traced letters to the fabric, cut out the letters, removed the backing paper, arranged the letters on backing using a full-sized printed version for spacing, the fused them down. 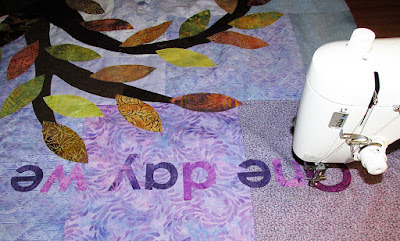 Days 10 & 11 : I sewed down the raw edges on the letters. I used my regular foot for the straight letters (like the ‘l’ and ‘w’) and my free motion foot for the round letters so I wouldn’t have to move the fabric as much. 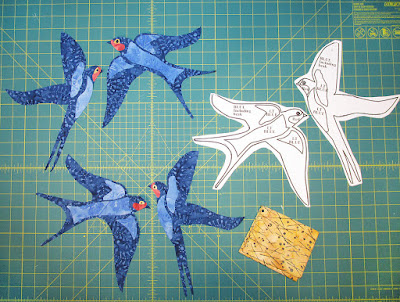 Day 12 : I created, fused, then sewed down the four swallows. Often the eyes are the hardest part, because they are so small. I found a fabric that had a dark blue dot on a cream colored background (shown in the photo) and I cut out around the dot. I cut the pieces a little larger than I needed so part of that fabric is under the red fabric so there are more stitches to hold it down. 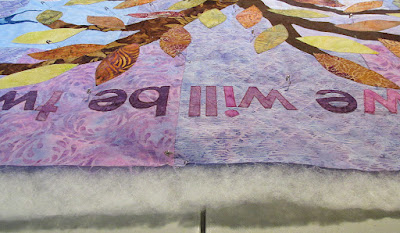 Day 13 : Now that both quilt tops had all their pieces sewn down it was time to make one of them the “back.” I placed this piece face down on my three six-foot tables, laid the batting on top, then placed the top piece on top of the batting. I decided the Fall/Winter side would be on top. I used pins to hold the quilt sandwich together, which we call “pin basting.” 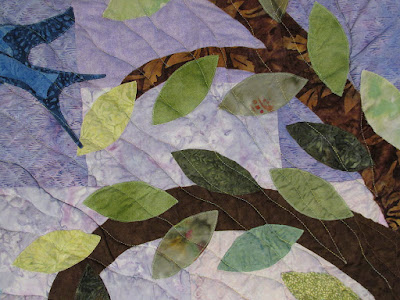 Day 14 : It is finally time to start quilting! Usually I don’t know how I want to do the quilting when I start a quilt, and it’s something that I think of while I’m putting it all together. Usually I think I’m going to do it one way then end up changing my mind and the last minute, which is what happened this time.

Because the fabric will move some as you quilt it, it’s a good idea to start in the middle and quilt outwards. Since the tree is in the middle of this quilt, I decided to quilt it first. I used Superior Thread’s Fantastico Thread #5009 that is a variegated brown and since most bark outlines on trees run vertically, that’s the way I quilted it.

Then I quilted lines that moved radially from the approximate center but behind the tree. For this I used Superior Thread’s Fantastico #5156 that is variegated green/blue/ purple. 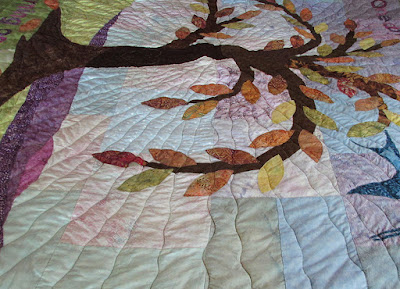 Day 15 : More quilting. The last thing I do today is add fray check to the raw edges to keep them from fraying. Batik fabrics are usually a made with fabric that has a tighter weave and they don’t fray as much as quilting cottons, although all fabrics will fray when cut along certain curves, and I have a lot of curves in this piece. About 75% of the fabrics in this quilt are batiks, but there are some commercial cottons. 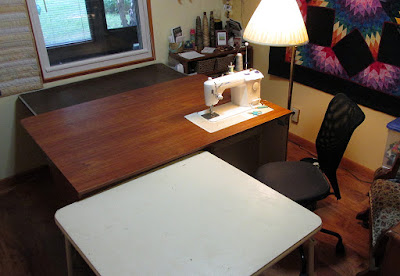 Day 16 : And now it’s time to add the borders, but first I have to prep the middle part.  I washed the quilt on the gentle cycle and laid it flat to dry on the two six-foot plastic tables. While it’s drying, I machine wash and dry the fabric for the borders, then I iron and cut them. I also wet the batting in the bathtub and machine dry it on high to pre-shrink it as I don’t want it shrinking when it’s washed. (I did this for the batting in the middle part of the quilt, also.)

I also set up my sewing area. I've added a 4-foot table behind the sewing table and a card table to my left to help support the quilt as I'm maneuvering it in the sewing machine. I've also added a third 6-foot table in the annex room to lay it on when I'm not working on it.

Most of the time the borders are added to the quilt top before the quilting but I decided to use a quilt-as-you-go method to add the borders after the middle part was quilting. The main reason was because the borders are going to be about 20” wide so there would be a lot of extra bulk for me to quilt around when doing all the quilting in the middle. Also because it is a two-sided quilt and I wasn’t confident that I’d get the borders to line up when I basted it (and the fabric sometimes moves during the quilting process) this would allow me to make sure the borders are in the same place on the front and back. 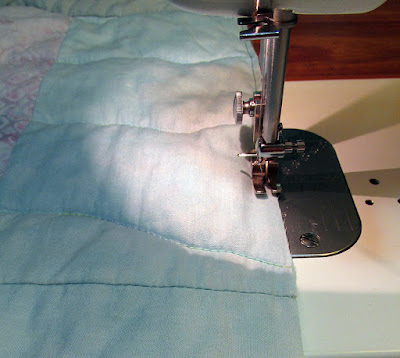 Day 17 : Once all the pieces are dry I add the borders by sewing a "stay stitch" approximately 1/8" around the edge to tack down the ends of the quilting thread and make sure than the edges won't be accidentally turned over when I'm attaching the border (I won't be able to see the edge since it will be under the border fabric.

Next I lay the back border face up with the edge of the quilt on top of it and the top border face down. I sew through all three layers with a generous 1/4“, then I abut the border batting next to the quilt and do a zigzag stitch to hold it in place. For additional stability, I fused some fusible innerfacing over the seams.

Because this method allows you to work in parts, I added just the top and bottom borders on and quilt today. 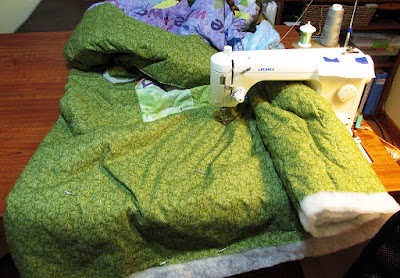 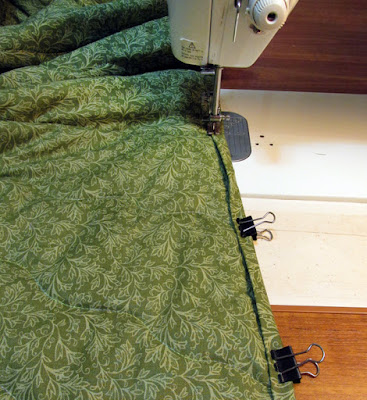 Day 19 : The end is in sight! I trim off the edges of the border to make it square then add the binding. I like to use binder clips holding it the binding in place before I sew it. Isn't that why they're called binder clips? Next I'll take photos of it to send to my client. I hope she likes it!

This is the most time I’ve spent working on a quilt. I didn’t do all of this in consecutive days, there were some days I had other commitments and some days where I did half of the work on one day, and the other half the next. I can usually only average sewing about 5 hours per day because I want to stay sharp and not make many mistakes. There were even a few days that I worked until late in the evening, but that was not the norm.

You can click on any of the photos to see them larger.
Posted by Pam Geisel - For Quilts Sake at 1:56 PM

Fabulous quilt, Pam! I liked reading and seeing how it was done.

Wonderful tutorial. Love that you showed every step! Congrats on a great work!

I loved reading through & seeing the steps! Of course I LOVE the outcome...it's mine! Thank you!

Great quilt, Pam ... the colours you chose work so well with this theme.

What a stunning quilt! I'm glad your client likes it, and no wonder. Beautiful!