Carnival of Colors - Time to vote on Project Quilting 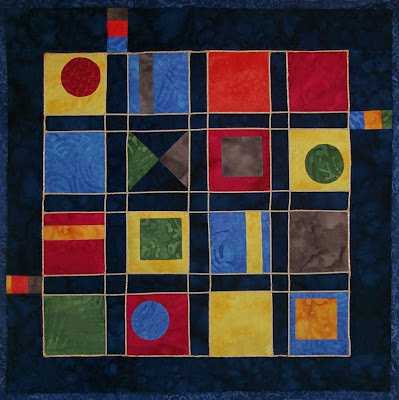 Here are the 3 batik fabrics that I used as my primary colors cut into 4 squares, and the 3 other batik fabrics I used for squares. 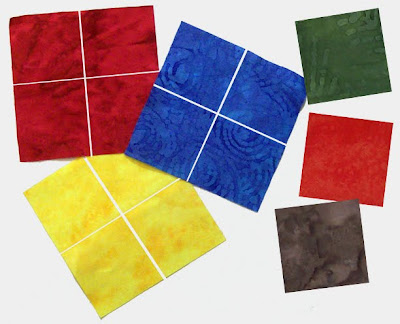 I played around with the arrangement of the squares, making sure that I didn’t have a row or column with a duplicate color. With the four-by-four arrangement, there was one spot left over. I thought about piecing a square with four different colored triangles but I liked that spot didn’t have as much color so I cut two quarter-square triangle pieces from the green and the brownish-gray fabric as they were less contrast than the color fabric, and I placed them on the fabric leaving two triangle shapes of deep blue background fabric.


I cut three 2” squares, three 2” circles and three 3”x.75” rectangles and arranged them off-center on top of several of the 3” primary color squares. Once I was happy with the arrangements, I fused these shapes and sewed along the raw edges using the same color thread. 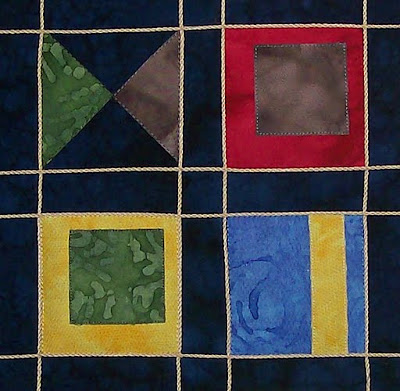 I wanted to do some embellishing so I got a piece of thin gold cording and tried some different arrangements with it and decided I liked how it made the edges look really crisp so I layered the quilt sandwich then quilted the cord on top of the raw edges, which also created smaller squares where the cornerstones would be it the quilt had pieced with sashing.

I also quilted the cord where the backing meets the borders, then I stitch-in-the-ditch quilted inside the squares using the same color fabric as the square that I was in.

More about Carnival of Colors


To see the other entries, go to the Primary Colors page.
Posted by Pam Geisel - For Quilts Sake at 10:30 AM