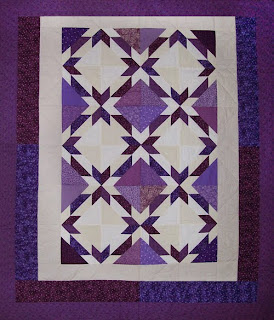 I recently finished this queen-sized, purple and white bed quilt for a friend. It's called "Hunter's Star" and the stars are formed in the corners when you piece the blocks and arrange them next to each other.

The blocks are arranged with 4 blocks going across and 6 blocks going down and there are 3 borders: an inner cream border, a middle border of 2 different purples and the outer purple border. So that the pieced part will fit on the bed without hanging over the bottom edge, I eliminated the middle border at the top and also made the cream border a little narrower. This part will be under the pillows. 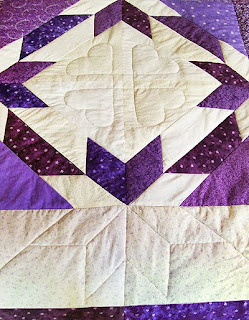 Most of the quilting is stitch-in-the-ditch with a purple varigated thread, but I did some free motion hearts in the center of the cream squares, and in the cream border I echoed the stars that would have been there if the pattern had continued. Both of those were with cream-colored thread.