Me and the Really Big "E" 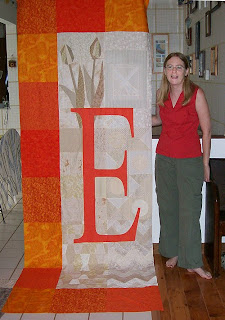 The Etsy admin contacted Quiltsy, the quilting team I belong to, to have us make some large banners that spelled out "Etsy" for them to use as room dividers in their new offices. Several team members pieced the cream-colored panels and my job was to piece the cream panels together, applique the large orange "E" and then piece the orange borders on.

The piecing went quickly but appliqueing the "E" took longer than I thought it would. I cut out the "E" with a 1/4" seam allowance, put fusible webbing on the back of and folded the edges under, like you do when you blind-stitch by hand. Then I put another strip of 1/4" fusible tape on the part that was folded over and used the iron to press the "E" to the backing fabric.

Instead of stitching it by hand, I used the sewing machine and used a zigzag stitch wider than what I use when doing raw-edge applique.

It's over 9 feet tall, and I don't have any place in the house to take a photo of something that tall, so some if it is on the floor. I'm 5'3", so you can tell how big that "E" really is.

UPDATE: This post shows the banner hanging with the others.
Posted by Pam Geisel - For Quilts Sake at 11:24 AM

Email ThisBlogThis!Share to TwitterShare to FacebookShare to Pinterest
Labels: Etsy Quiltsy, where to buy my art

Looks great, I can't wait to see it all!

This is beautiful, Pam. I'm awed by your precision.