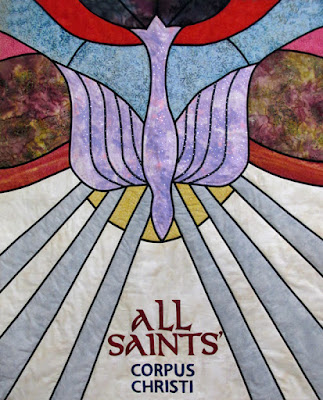 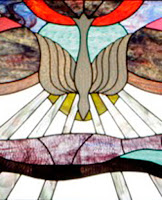 Earlier this year I was contacted by the All Saints' Episcopal Church in Corpus Christi, Texas. They were hosting a diocese convocation and wanted a quilted banner based from a photo of one of their stained glass windows.

Working from the photo provided, I removed the horizontal design elements near the bottom of the piece so I would have a place to put their logo.

Then I pulled out batik fabrics that I thought were close in color to the stained glass, which I cut to the correct shape and fused to a white background fabric. 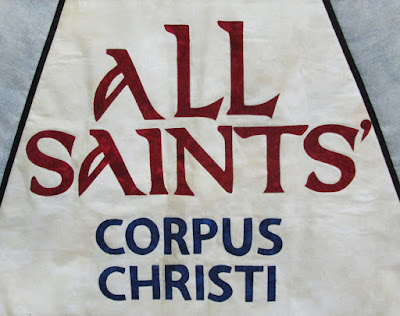 I also fused the letters, which I stitched around the raw edges. I basted the quilt top with batting and a backing fabric and it was time to start quilting. 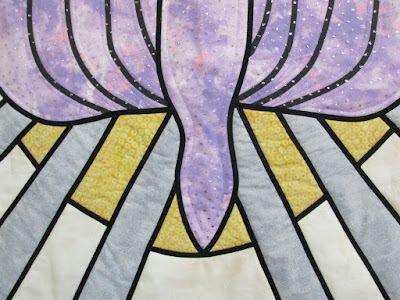 Luckily I already had a lot of black fusible bias tape which I used to make the "leading" in the window. I fused it to where the different color fabrics met and then sewed down both sides with black thread. The tricky part was the order which it was fused and sewn so I could get as many raw edges underneath other pieces of the bias tape.

I did the leading on the interior wings of the dive first then I covered all of the light purple dove fabric with a purple tulle that had some silver sparkles on it. (You can see them when they're on top of the black bias tape in the photo above). I wasn't sure how well the tulle worked until I stepped back and then I think it really added to the stained glass effect.

The binding was a knife-edge facing and I added two sleeves and a stick with some cording so they would be able to carry the banner during the convocation.
Posted by Pam Geisel Art Quilts at 1:47 PM