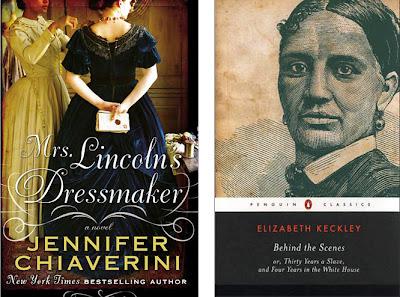 If you're a regular reader of Jennifer Chiaverini's books then her recent book "Mrs. Lincoln's Dressmaker" might seen a little different. Not only is it not an Elm Creek Book novel, it's based on an actual person, Elizabeth Keckley, a former slave who became Mrs. Lincoln's dressmaker.

Because Jennifer relied heavily on Elizabeth's own memoir "Behind the Scenes or, Thirty Years a Slave, and Four Years in the White House." I decided to read both books. And even though the memoir was originally published in 1868, it is still available today.

Although there is a lot of overlap in the two books, "Behind the Scenes" covers more of Elizabeth's life before she became Mrs. Lincoln's dressmaker. It includes her time growing up as a slave, how she was able to save enough money to buy her freedom and also the freedom of her son George, and how she moved to Washington D.C. as a free woman to become a dressmaker. "Mrs. Lincoln's Dressmaker" includes what happens to Elizabeth after her memoirs were published.

Elizabeth first met Mrs. Lincoln on the day of President Lincoln's first inauguration. She remained as her dressmaker until shortly after the president was assassinated. It was after that time that Elizabeth was encouraged to write her memoirs, and although she thought she was presenting Mrs. Lincoln in a good light, Mrs. Lincoln wasn't pleased with the memoir and cut off all contact after that. Sadly, the book got bad reviews and Elizabeth never many any money from it.

Along with reading both books, I was able to attend a lecture and book signing sponsored by the Warren County Historical Society when Jennifer was at the Golden Lamb in Lebanon, Ohio, in January 2013. She's a gracious and entertaining speaker and it was interesting to hear about her process for writing this book.

It is believed that she made a quilt using the scraps from Mrs. Lincoln's dresses. That quilt is owned by the Kent State University Museum although it is my understanding that it is not displayed regularly. 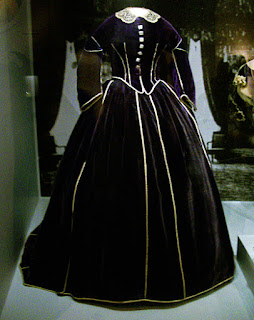 We recently took a trip to Washington DC and the Smithonian National Museum of American History has an exhibit of dresses worn by the first lady. The purple velvet dress (left) that was worn by Mrs. Lincoln is believed to be made by Elizabeth.

Before we went on our trip we watched the movie "Lincoln" and Elizabeth is a character in the movie, although you wouldn't know that she was a dressmaker.

On a personal note, Elizabeth's son George attended Wilberforce University before he enlisted in the Union Army where he died during the Civil War. In 1892 Elizabeth taught dressmaking at Wilberforce, which is about 10 miles from where I live.

Here's a link to an article in the New York Times about Elizabeth Keckley.
Posted by Pam Geisel - For Quilts Sake at 9:27 AM