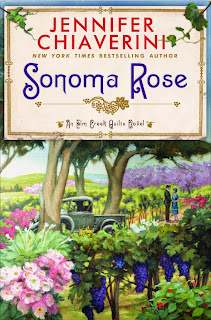 As a quilter, I enjoy reading novels about quilters and quilt themes. I’ve been reading Jennifer Chiaverini’s Elm Creek Quilts novels since The Quilter’s Apprentice first came out in 2000. When Round Robin, the second book in the series came out, I decided that Jennifer was a genius. She’d set up the premise of a quilter’s retreat in the first book but would be able to write books that followed the people who attended the retreat, have her characters move to different locations, and sometimes the narrative follows a quilt as it travels across the country.

Several of the books are set in the past, featuring relatives of the main character and sometimes specific quilts that were made in the historical books but still around in the contemporary books.

Jennifer’s latest book Sonoma Rose is set in southern California in the 1920s, specifically in wine country during Prohibition. The Elm Creek connection is that the main character, Rosa Barclay, is an acquaintance of Elizabeth Nelson, the favorite aunt of Sylvia Compson, the main characters and master quilter in the series. Elizabeth’s story is told in The Quilter’s Homecoming. While reading Sonoma Rose I really wanted to re-read The Quilter’s Homecoming to see how the stories cross over.

While I enjoy the contemporary Elm Creek novels, I like reading the historical books because they offer me a glimpse into what life was like in another place during another time and I often find myself learning new things.

There isn’t a lot about quilting in Sonoma Rose but in some ways there are some quilts that are a catalyst for what occurs in the book.

While there are the usual themes expected in a book set during prohibition such as bootlegging and mobsters, there are several contemporary themes including abusive spouses, Celiac disease, and alcoholism. I found the characters were complex and well developed and once I finished the book I found that the characters stayed in my head.

Sonoma Rose is being released today and is available in hardback.
Posted by Pam Geisel - For Quilts Sake at 2:47 PM

I am so excited to read this! I love her books, she does a great job of creating memorable characters.

I've been waiting for this one to come out to download to my Kindle! I also like learning about history through historical fiction and Jennifer weaves a great tale.

Thank you so much for your review Pam! I really can't wait to get this new book. I'm looking forward to getting to know these new characters.

Pam,
Thanks for a great review, I love the historical Elm Creek books too! I'll have to make a trip to the book store soon :)