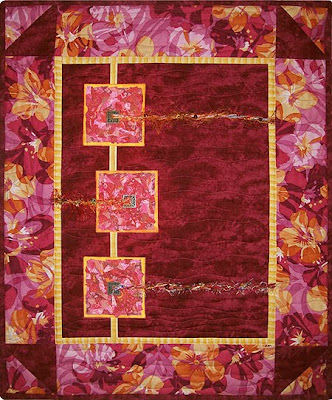 I don’t usually use a lot of large scale prints, but I did have half a yard of one with large overlapping yellow, orange, pink and burgundy flowers that I’d bought several years ago for a purpose that I don’t remember now. It’s just been sitting in my stash taunting me.

When this challenge was posted I knew I wanted to finally use that fabric and a layout came to me rather quickly, it was just the stripe that had me concerned. I’ve used striped fabric before (I like to use them for bindings) but when I’ve gone to buy them I usually haven’t liked the selection of striped fabric.

Because of that concern I actually came up with a second layout using a different large scale print that went with a striped fabric I already had in my possession. Off to the fabric store (the only one of the six challenges that I’ve had to buy fabric for).

I wanted a stripe fabric with at least one of the colors in the large scale print but not something too formal or straight. The very first striped fabric I found was perfect, and how often does that happen? I did check out all the other options but went back to the first one, a yellow fabric with an orange stripe that looked like it was made with a crayon, so not too formal or straight! And it was a remnant, so I got it for half price.

I also purchased the burgundy background fabric because I wanted something that was mostly solid so it wouldn’t compete with the large scale print or the stripe but it had just enough color variation to provide some visual texture. 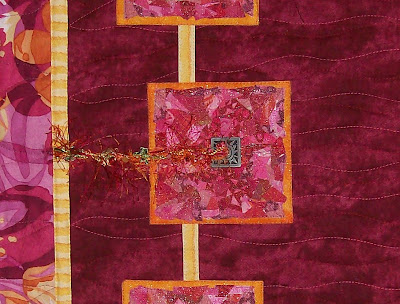 Before I added the other elements, I quilted the burgundy background at this time with slightly-curved horizontal lines in both a dark burgundy and a pink thread to give it more visual depth (the dark burgundy thread is a little hard to see in the photos).

I quilted stitch-in-the-ditch on both sides of the yellow stripe border then did the same slightly-curved horizontal lines in the borders, going all the way across the top and bottom borders and doing shorter waves on the side borders. 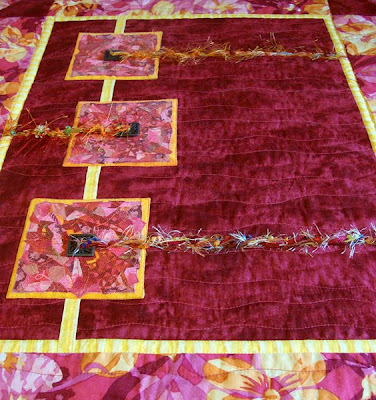 I wanted a visual element to go on the burgundy background that had the same energy that the large scale print had but at a smaller scale so I made the three “fabric mosaics.” I fused many small pieces of orange, pink and burgundy fabrics on a square orange background allowing the mosaic pieces to form unusual angles at where they stopped.

I covered them with netting (which provides the sparkle that shows in the photo) and quilted them together with a purpley thread and also an orange thread. I folded the raw edges under then machine appliqued the mosaics to the background, aligning the top and bottom blocks so they were centered on the yellow stripe.

To hold the yarn and ribbons in the center of the fabric mosaic blocks I considered at least 10 sets of items including shells, plastic rings and round paper clips but decided to use three square buttons from a blouse I bought about 18 years ago (I probably bought the blouse because I liked the buttons, and when it was time for it to become a rag I saved the buttons…and my husband even recognized that they were from a blouse that I used to have).

I twisted different yarns (including fun fur) horizontally across the quilt and added beads every few inches to hold them in place.


To see the other entries, go to the Large Scale Print page.
Posted by Pam Geisel - For Quilts Sake at 2:14 PM

Beautiful!! I love how you use your fabric mosaics in this larger quilt.